Skimming through the Forbes 400 list of the wealthiest Americans, there's no denying each and every one of those zeros adds up to equal a label of "rich." Even among the top earners in America, net worth varies tremendously. But when we broaden the scope and look at the country as a whole, incomes have created a stark divide – the wealthy are getting wealthier, and the poor are getting poorer, narrowing the middle class to almost nothing in some states.

With such a large wealth gap and incomes increasing and decreasing over the past decade, what does it mean to be "rich" in America? Does the classification come about through zeros in bank accounts, assets under a name, or does the "money can't buy happiness" motto apply to "richness" as well? We surveyed over 1,000 people about their perceptions of wealth and the rich to find out how definitions differ across the country. Keep reading to see if your "rich" qualifications align with the rest.

Being rich doesn't necessarily equal happiness, but financial security definitely comes with some stress relief. So, based on the money people are currenting bringing in, how satisfied are they with their current situation?

Financial situations are always changing, and as the cost of living continues to increase in America, it makes sense that most people would want more money in their pocket. Overall, 4.2 percent of people are okay with their current financial situation, but 62.5 percent would like to have more money. That doesn't necessarily mean people wish they were rich, however. Using the term "rich" specifically, only one-third of respondents would choose to be rich over their current financial state.

Similar patterns were seen between both men and women, with women being more likely to want more money. While 55.3 percent of men would like to have more money, 70.5 percent of women said the same. It's important to note the differences in cost of living between the genders, though. All around, it costs more to be a woman living in America. On top of men making more for the same work, a significant number of products costs more for women than for men, despite being the exact same thing.

Considering the distinction between having more money and being "rich," only 49 percent of respondents were actively working with the intention of becoming rich. Millennials were the generation most likely to work with becoming rich in mind – while 57.1 percent of the younger generation works for riches, only 41.4 percent of Gen-Xers and 25 percent of baby boomers said the same.

In 2018, the average household income for an American working 40 hours per week increased by 5 percent, reaching approximately $46,800. However, a 5 percent increase in average yearly income was accompanied by a 2.9 percent increase in the cost of living, making it almost impossible to save, let alone live comfortably. In fact, according to data collected by the Federal Reserve Board, 40 percent of Americans didn't have enough money saved to cover a $400 emergency. Most may think, then, that simply having a few thousand dollars in savings is at least borderline "rich," but in reality, it would take a whopping $2.3 million on average for someone to consider you rich.

The Right Amount of Cash

The average amount of cash needed to be considered rich differed significantly between income levels. Those bringing in between $0 and $29,000 annually thought just over $1.7 million in cash is a sign of being rich. But for those in the next income bracket, making between $30,000 and $59,000, the average cash amount jumps to $2.3 million. Considering that the only Americans with savings of over $1 million are those in the top 1 percent, it's surprising that the average cash amounts are so high across all incomes.

Everyone's idea of being "rich" isn't strictly based on paper bills, though. While 81.2 percent thought being rich is defined as having a lot of money, 71.5 thought assets including homes, cars, and jewelry, were the true marker. For others, being rich wasn't even about money or items, it was more about not having to stress about how much things cost, being able to buy whatever you want, or being able to travel without any financial stressors. While all of these definitions are related to money, it's less about the dollar amount and more about the lifestyle and peace of mind a comfortable salary can bring.

Rich Through the Ages

Stories about millennials and money often focus on the unique challenges their generation faces and the mass amounts of debt they've accumulated. While the generation certainly faces financial obstacles, millennial households are actually bringing in more money annually than young adult households did in the past 50 years, and their perceptions of what it takes to be rich reflect that.

While many would likely think millennials view wealth drastically different than the older generations, their qualifications fell in line with the rest. While both baby boomers and Gen-Xers thought an average of over $2.6 million makes someone rich, millennials drew the line at an average of just over $2.2 million.

Surprisingly, though, the necessary amount people should have in their checking and savings differed a little more. When it comes to checking accounts, millennials and Gen-Xers thought around $350,000 is what it takes to be rich, while baby boomers cut the qualification to just $255,000. And despite the average household having only $16,420 in a savings account, baby boomers and millennials thought a savings account balance of over $400,000 equated to being "rich," while Gen-Xers thought it took over $574,000.

California is home to many of the richest cities, but the South's qualifications for "rich" are higher than those in the Western region of the United States. While those in the West thought an average of $317,000 in a checking account qualifies the classification of rich, the South upped the amount to an average of $373,000. However, the West may just think money in savings is a better indicator. The average minimum amount in a savings account to be considered rich is $489,512.12, but according to respondents in the West, it's an average of almost $526,000.

In all regions, however, men tend to think it takes more money in both checking and savings to qualify as being called "rich." On average, men thought nearly $372,000 in a checking account equates the status of "rich," while women thought the number was closer to $315,000. The difference between genders was greater when looking at savings accounts, though – women thought being rich meant heaving around $536,000 in savings and men thought around $536,000 was the magic number.

Thanks to the days of social media, most people can see through the eyes of a rich person. Click on any celebrity's page, and lavish vacations, cars, shoes, and mansions are the standard. But thanks to their deep pockets, these purchases are nothing more than everyday living. Imagining that we have the same luxuries as the rich, how much do people think they would spend on leisure each year? On average, they would spend over $26,000 – that's nearly ten times the amount an average family would spend in a year.

In the South, people would spend significantly more money on leisure compared to every other region. While the West, Northeast, and Midwest would keep their spending under $300,000, the South estimated their spending at over $451,000 – not including bills.

So, what exactly would they be spending their money on? A significant portion would be going towards vacation. While people typically take one vacation each year, respondents would take an average of 4 vacations every year if they were rich. Of course, being rich would mean more flexibility in work schedules and those working in the government and public administration industry would spend the most days on vacation. Government employees would take an average of 5.2 days off to spend in the location of their choosing, while those in construction would spend an average of 5.1 days doing the same.

If people took four vacations each year, for an average of 4 days, they'd be spending 16 days away from work and daily responsibilities every year. That's surprisingly not a lot of days away from work – the average employee with five years of experience at a company received 15 days of paid vacation in 2017, while those with 20 years of experience received 20 paid vacation days.

Being rich comes with numerous selfish benefits, but it also comes with the ability to make a difference in someone else's life. Most people think those who are rich should assist their family significantly more than they should their friends. When it comes to finances and family, 62.7 percent think the rich should spread the wealth. On the other hand, only 33.6 percent think the rich should assist friends in their financial issues. This is likely due to the possibility of being taken advantage of. While the majority didn't think family or friends would take advantage of them if they were rich, respondents thought friends were more likely than family to simply take what they can get.

Can Happiness be Bought? 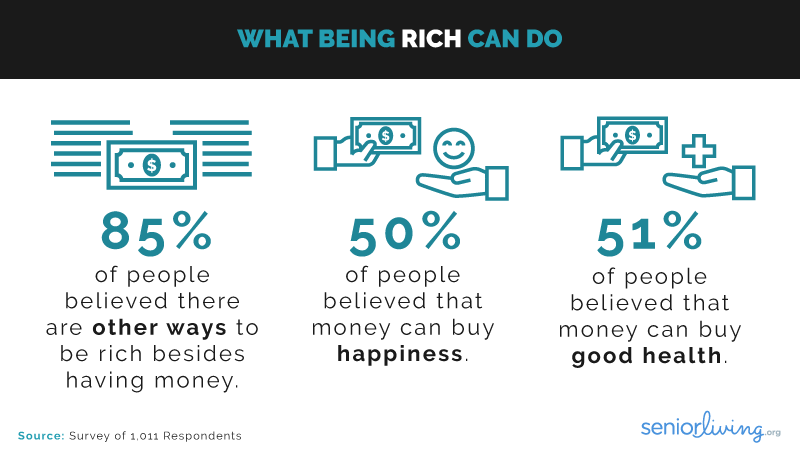 Wanting to be rich is heavily tied to the perception of what richness is and what it can bring. Surprisingly, most people don't define being rich as a dollar amount – 85 percent of people believed there are other ways to be rich besides having money. Whether that's living a life surrounded by family and friends, or giving back to your community, there are other plenty of ways to live a rich life that have nothing to do with money in a bank account.

Similarly, happiness isn't always tied to how much money one has or how many things can be bought. Fifty percent of people believed money could buy happiness, but according to science, they aren't entirely wrong. Not only does an increased income resolve stress and anxiety related to finance, but it also allows people to spend money in ways and on things that bring them joy. However, this doesn't mean large houses and fancy sports cars. An increased salary means people are able to spend more money on experiences like traveling, give more to charity, help loved ones, and spend less time on mundane tasks that cause stress.

The link between money and happiness isn't all that strong, though. At $75,000 in annual salary, the link dies off. Happiness levels don't increase exponentially along with money but having enough money to make life a little easier is sure to make people happier.

Financial Assistance at Your Fingertips

Looking up the definition of the word "rich," there are no parameters or qualifications as to how much money or assets one must have to be considered rich. There may be clear lists of the top earners in America, but for the most part, the amount of money required to be rich varies person to person. Men typically think the label requires more money in both checking and savings accounts, but regional and generational differences also exist. While a clear answer is likely never going to arise, it's important to remember money is not the only indicator of being rich. And while money can buy happiness, the cut off is a lot lower than many would think.

Being rich is not mandatory for a good life, nor is it the goal for most. However, financial security is important for everyone and can be difficult in later years of life.

The data we are presenting is self-reported. There are many issues with self-reported data. These issues include but are not limited to selective memory, telescoping, attribution, and exaggeration, especially when studying personal finances. As a result, the outliers in this study have been excluded.

How much money do you think it takes to consider yourself rich? If you find this study interesting and you would like to share our findings for noncommercial purposes, please do – but don't go overboard and forget to link back here to provide our team credit for their work.