The conventional wisdom that Americans hate taxes (tons of famous people have gone to prison because they really didn’t want to pay their taxes) may not be altogether true. A Pew Research Center survey found that most Americans believe paying all the taxes you owe is a crucial part of being a good American, just behind following the law and just ahead of voting.

Perhaps Americans are aware of the Ben Franklin-penned reality that nothing is certain in life but death and taxes, so they’ve resigned themselves to reality. Or maybe they can do simple math and realize how crucial tax revenue is to a functioning society — individual federal income tax and the federal payroll tax combine to account for more than 8 in 10 dollars taken in by the U.S. government.

In a poll conducted just ahead of Tax Day 2019, Gallup found that nearly 60% of Americans said that the income tax they pay is a fair amount, but it’s also true that acknowledging that paying all the tax you owe is important isn’t quite the same as wishing for lower taxes, whether they come straight out of your paycheck or straight out of your bank account every time you buy something.

In addition to the income tax and other taxes we pay to the federal government, every state and the District of Columbia have additional taxes that they levy on their residents and that vary widely state-by-state and county-by-county. We wanted to look at which Americans have it easiest when it comes to state, county and local taxes across a sampling of the most commonly paid types of taxes.

Our analysis found a 7 percentage-point spread between the state with the lowest combined median tax rate (Alaska) and the state with the highest (California). Differences in tax rates could represent thousands of dollars for the average person and could mean serious savings for people with the freedom to choose where to live.

Jump to the bottom of the page to read our full methodology, but here’s how we calculated each state’s total tax rate. We used the median income tax rate, the median effective property tax rate, the average combined sales tax rate and the average effective gas tax rate in each state, then calculated a median of those figures to arrive at our final ranking, from lowest to highest median combined tax rate.

How Does Your State Rank?

As we’ve already mentioned, Alaska’s combined tax rate is the country’s lowest at just 1.23%. We’ll break down each area in subsequent sections, but Alaska has no state income tax and no statewide sales tax, though some counties in the state do charge sales taxes. The state’s gas tax rate is the lowest in the country, and its property tax rate is near the middle of the pack.

On the flip side, California’s combined rate of 8.61% is the nation’s highest, putting the Golden State more than a percentage point ahead of Minnesota. California has the highest median income tax rate, the 10th-highest state sales tax rate and the fifth-highest gas tax rate.

Here’s a look at how every state performed in our full ranking: 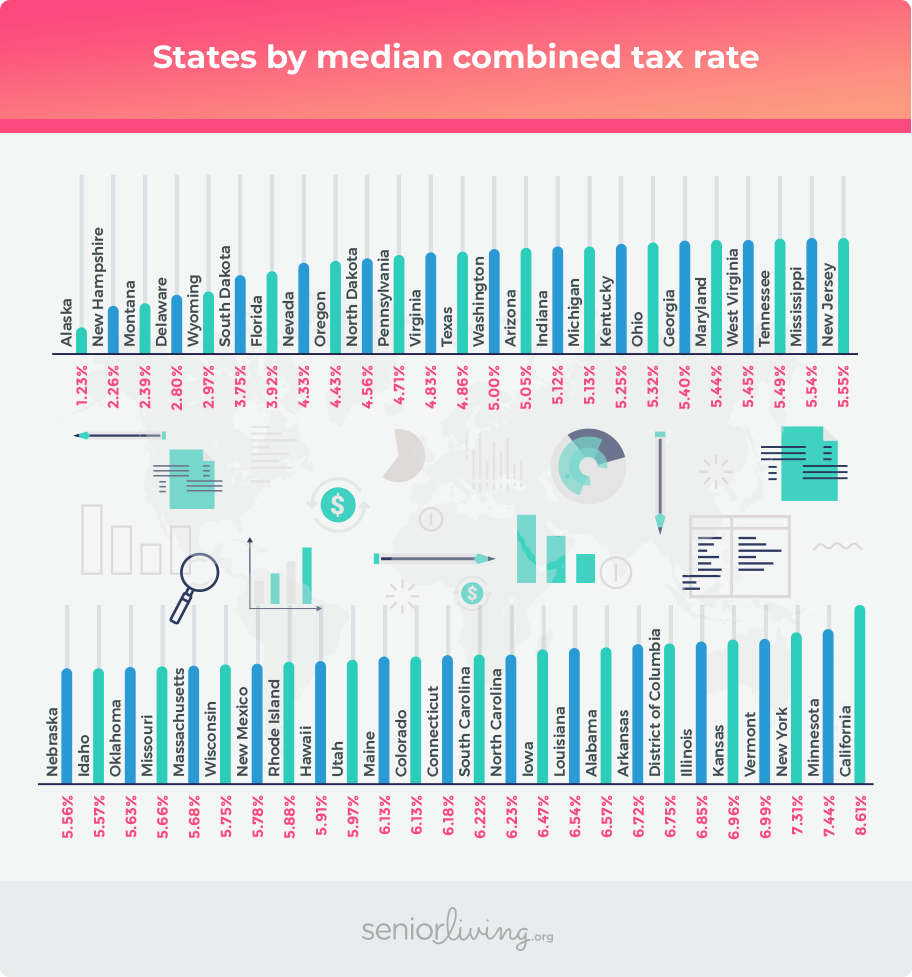 Among the states with the lowest combined tax rates, half are in the West, and Florida (an income tax-less state) is the only Southern state among those with the 10 lowest overall rates. Two of the three most populous states (New York and California) have among the five highest rates in the nation.

North Carolina and South Carolina have almost identical rates (6.23% and 6.22%, respectively), and four states (Alabama, Arkansas, D.C. and Louisiana) have both one of the 10 highest tax rates and 10 highest rates of poverty, though, notably, the District of Columbia is the only one of the bunch with a very high income tax rate. That could indicate that the burden of state-level taxes in some places is being borne by people who can little afford it.

Most states, like the federal government, have a progressive income tax system in which the more you earn, the higher a percentage of your income goes toward taxes. Six states do not impose any income tax, and two other states don’t have a tax on earned income. Tennessee and New Hampshire both have an income tax, but it applies only to dividend and interest income.

Income tax rates are incredibly variable across the nation, and because few of them are flat taxes (meaning the same rate is applied to everyone), the picture of how low or high rates are depends largely on how much you earn.

For instance, several states have tiny marginal rates of less than 1 percent for very low-wage earners. Iowa taxes single-filers earning up to $1,500 a marginal rate of 0.36%, Oklahoma has a 0.5% tax on those making under $1,000, and Arkansas’ lowest marginal rate, 0.9%, applies to people earning up to $4,298.

At the other end of the spectrum, two states (California and Hawaii) apply double-digit state income taxes on some wage-earners. Single-filers in California earning more than $275,737 pay a marginal rate of 10.3%, while those bringing home seven figures or more pay a state income tax rate of 13.3%. Hawaii’s highest marginal rates (10% and 11%) apply to those who make $175,000 and $200,000, respectively. 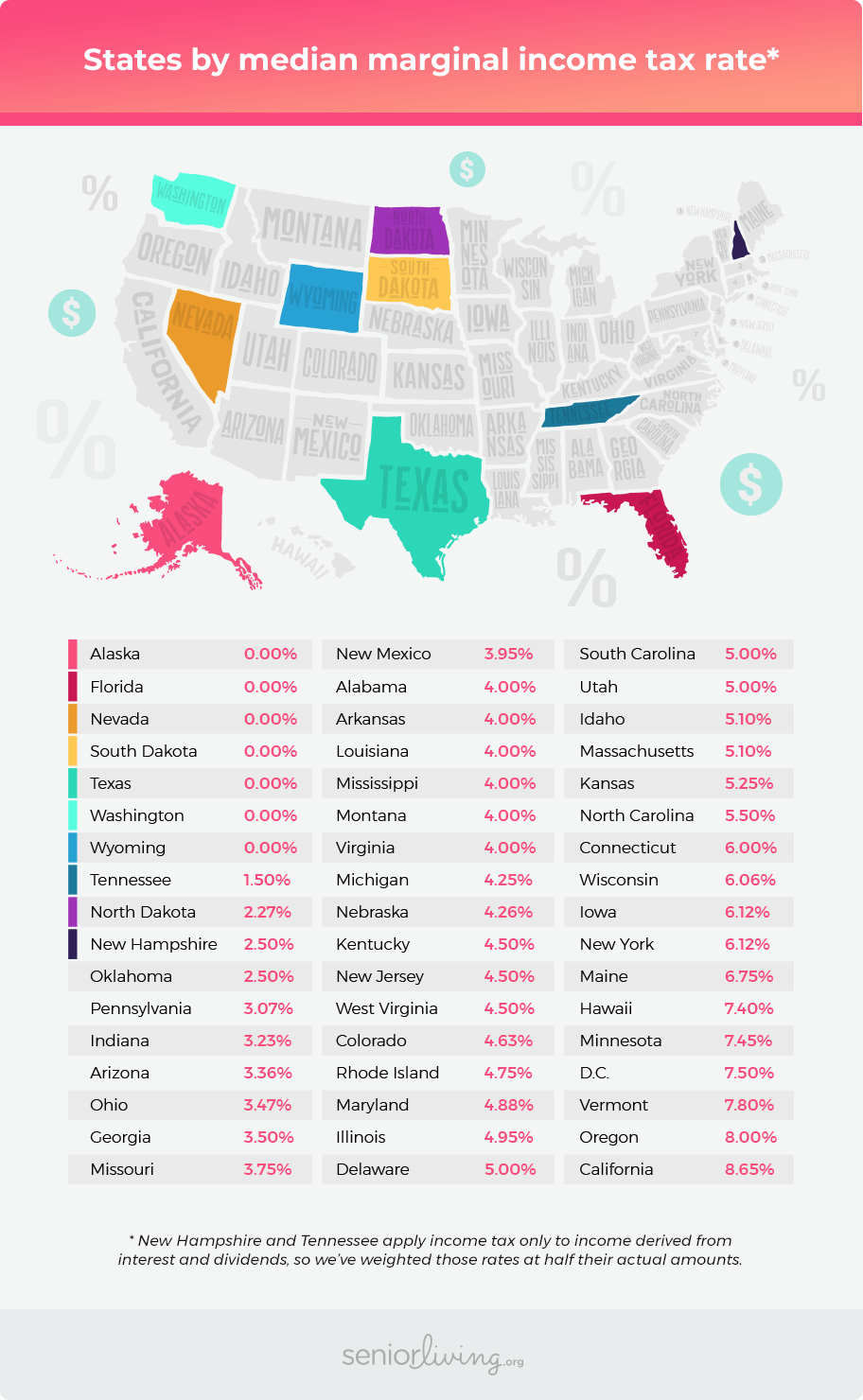 The owners of most parcels of land, whether they contain a house, business, farm or some other structure, are subject to annual property taxes, and cities, counties and states use this money to operate through various funding structures.

But the total tax bill paid can be affected by a number of factors, including special exemptions and credits that can be based on things like whether the property owner lives in the home and whether or not they have a mortgage. Our analysis looked at actual real estate taxes paid and compared those to median home values to create a broad picture of effective property tax rates. 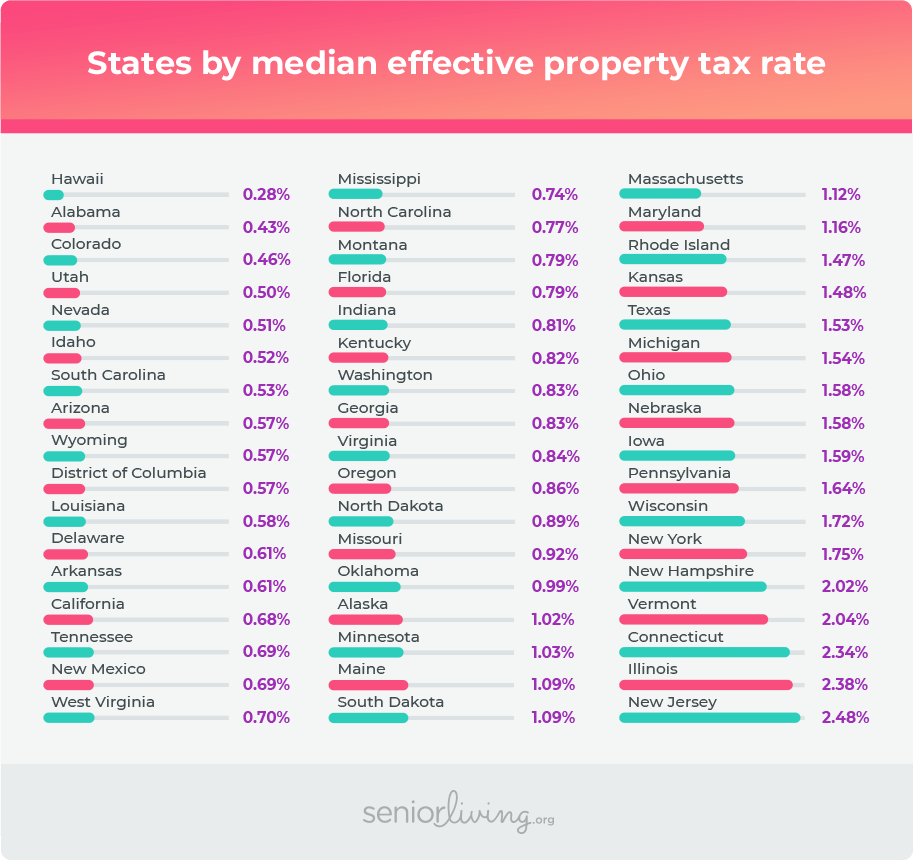 All but four states have at least some sales tax; Alaska, while it does not levy a statewide sales tax, does permit localities to levy their own, and they combine for a rate of 1.43%. Many other states also have sales tax rates that vary across the state with local areas often levying sales tax on certain purchases in addition to state sales taxes that are in place.

Sales taxes are considerably simpler than either income or property taxes, as they apply to everyone — well, almost everyone, some purchasers are tax-exempt. Plus, some items are not taxed in certain states, with some states removing or lowering sales taxes on purchases of things like food, clothing and medications. The presence of local sales taxes does add another wrinkle, but in most places where they exist, local sales taxes are under 1.5%.

While sales taxes may be less complex to calculate, a major criticism of tax policy that relies on sales taxes to the exclusion of other forms of taxation is that the very thing that makes them simple — their flat nature — means that people with less income pay a larger percentage of their wages than folks who make more.

In our analysis, we found that aside from states with no state sales tax, Hawaii had the lowest combined state and local sales tax rate at 4.41%, ideal for tourists, while Tennessee’s 9.47% was highest. In fact, five of the 10 states with the highest sales tax rates were in the South. 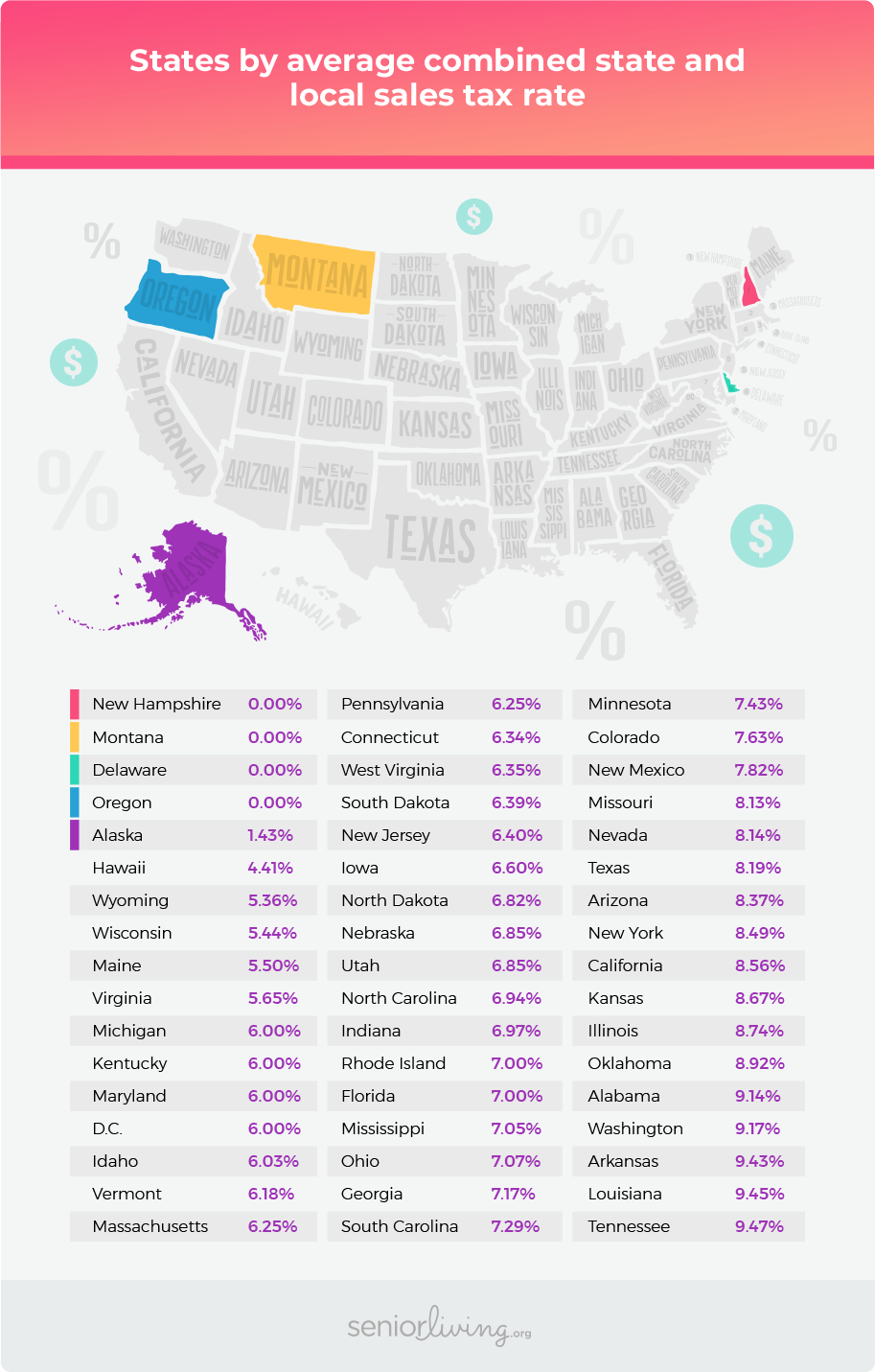 If complaining about taxes ever was the leading national pastime, then surely grumbling about high gas prices has to be a close second. It’s not hard to understand consumers’ frustrations when it costs upwards of $50 to fill up the tank and few people can adequately explain why gas prices are what they are or why they vary so dramatically across the country.

In late August 2019, a gallon of regular unleaded gas cost $2.20 in Louisiana and $3.66 in Hawaii, and most Americans can remember times when prices were even higher. Oil companies aren’t all to blame for high gas prices, though. That’s because the federal, state and local governments levy varying degrees of fees on every gallon of gas sold, with states largely using that money to pay for road work.

In our analysis, we compared each state’s total state and local gas and excise tax charged per gallon of gas to the average price of a gallon of gas in that state as reported by the AAA motor club. We used the prices listed before the Labor Day holiday began so we could avoid the resulting spike in prices.

What we found is that the effective gas tax rate in Alaska of just under 5% was the nation’s lowest, while Pennsylvania’s 21.38% was the highest. Pennsylvania had the highest rate despite having an average price per gallon outside the 10 highest. A total of 17 states had effective gas tax rates in the single digits, while six had rates higher than 15%. 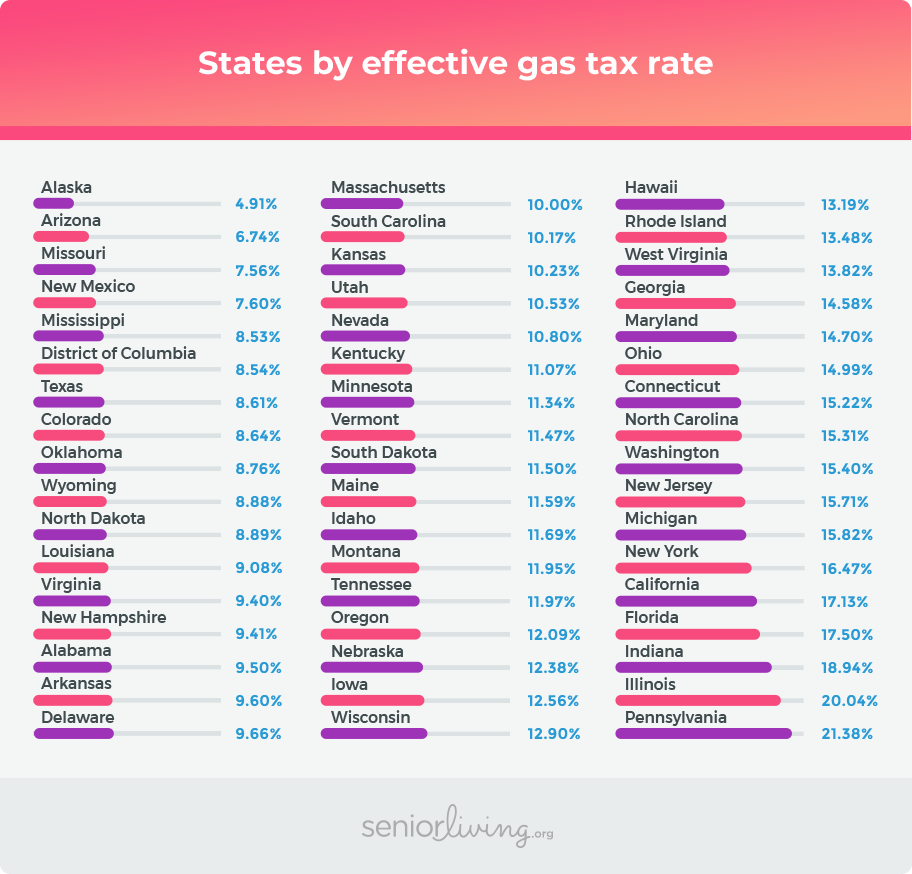 For most Americans, thinking about their tax burden probably extends only to their income taxes, and maybe their property tax bills. The majority of us don’t jump to things like added levies on items we buy and the fuel we use for our cars. But, as we’ve seen, these rates vary widely across the country, so wise consumers would do well to take these figures into consideration when they’re planning their next move.

To calculate typical tax rates across the country, we used data from several sources covering income, sales, property and gasoline taxes. Our sourcing and calculation methodology are described below:

Generally, the income tax rates listed were the median single-filer rate the state levies, but several states have a single tax rate for all residents and still others have no state income tax. For example, California’s income tax rate increases based on residents’ income, ranging from a low of 1% for very low wage-earners to 13.3% for individuals earning more than $1 million. On the other hand, Colorado residents’ income is taxed at 4.63% of their federal taxable income amount, while seven states have no income tax at all, though residents of those states still are subject to federal income taxes. Many counties, cities and school districts levy separate income taxes, and those are not listed here. As noted above, state income tax rates for New Hampshire and Tennessee (5% and 3%, respectively) apply only to interest and dividend income as opposed to wages, so we’ve cut those rates in half to make a more fair comparison since few Americans are active investors. The source for this information was the Tax Foundation, a conservative-leaning nonprofit, and the most recent rates were from 2018.

To calculate the median effective property tax rate, we used data from the U.S. Census Bureau on real estate taxes paid by state (including both mortgaged and non-mortgaged properties) and divided each state’s amount by the median home value, as reported by Zillow’s proprietary home value index. Zillow’s data was current to August 2019, while the Census data is updated annually and is based on averages over a number of years.

Most states charge a statewide sales tax on most goods sold. Five states have no statewide sales tax, but one of those (Alaska) does permit cities and counties to levy local sales taxes. We used data from the Tax Foundation that combined the average state and local rates in each state, which is a population-weighted average of state and local sales taxes. All rates are current through 2019.

Gas tax In addition to the federal government’s 18.4 cent-per-gallon gasoline tax, every state as well as many counties and municipalities charge excise and sales taxes on every gallon of gas sold. We used the total state and local gas taxes and fees charged by each state as reported by the American Petroleum Institute, a lobbying organization for oil and natural gas companies, and divided those amounts by the average cost of a gallon of regular unleaded gasoline reported by AAA as of Aug. 27, 2019.

The information and images on this page are free for any noncommercial purposes. Just include a link back to this URL for proper attribution.