America's population is aging, and so is its workforce. Even the days of early retirement seem to be in the past – there are now more Americans aged 65 and older in the workforce than in almost two decades, and is projected to be the fastest growing segment in the workforce through 2024.

So what jobs are older Americans taking, and for which occupations are employers most likely to hire them? We analyzed data from the U.S. Bureau of Labor Statistics to answer these questions and to see how much the workforce has changed since 2006. Keep reading to learn about the state of employment for older Americans. 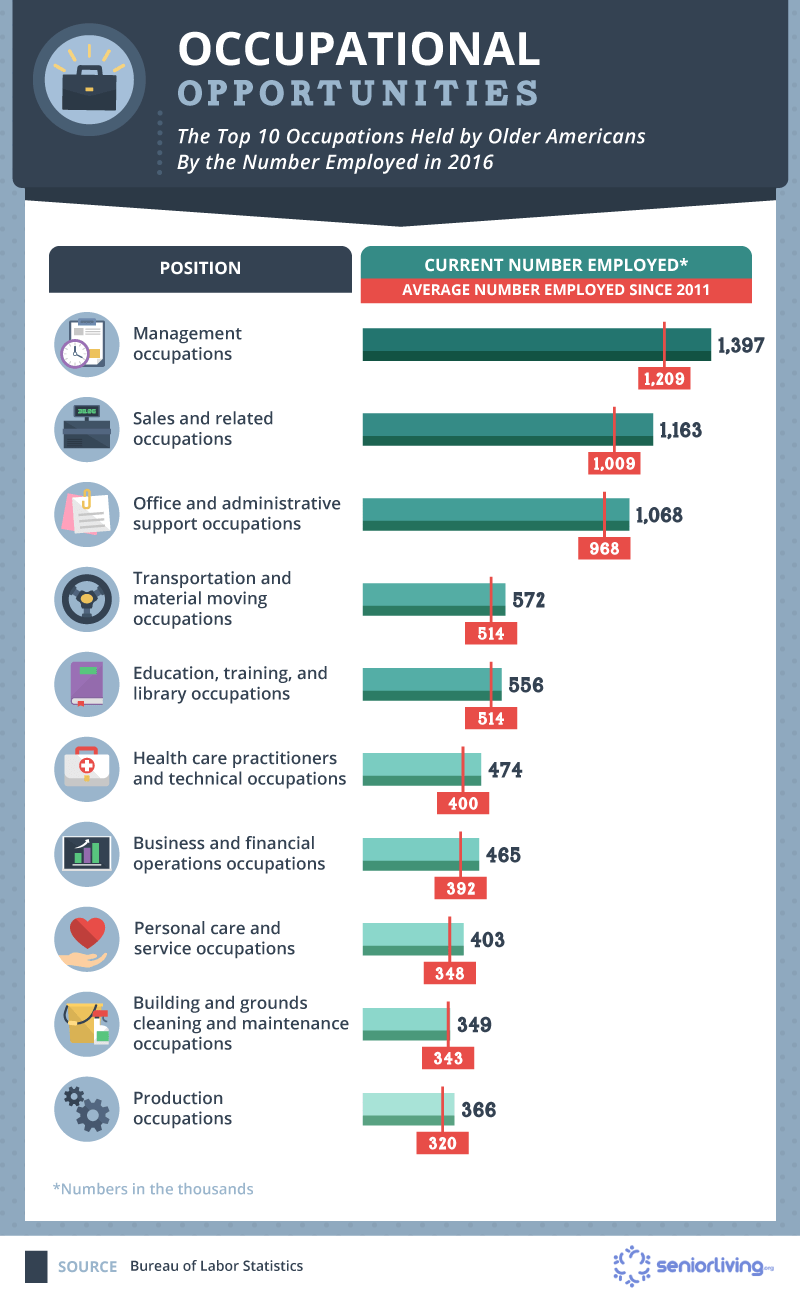 The top occupations held by older Americans have remained relatively the same since 2011, but the number of employees in each field has increased. Management occupations were the top field for older Americans, with about 1.4 million currently employed in 2016.

While production occupations employed the smallest average number of older Americans in 2011, the field brought in about 46,000 new employees by 2016, beating out the building and grounds cleaning and maintenance sector. With only 6,000 employees over the age of 65 added, the field of building and grounds cleaning and maintenance saw the smallest difference in elderly employment in the five-year span. 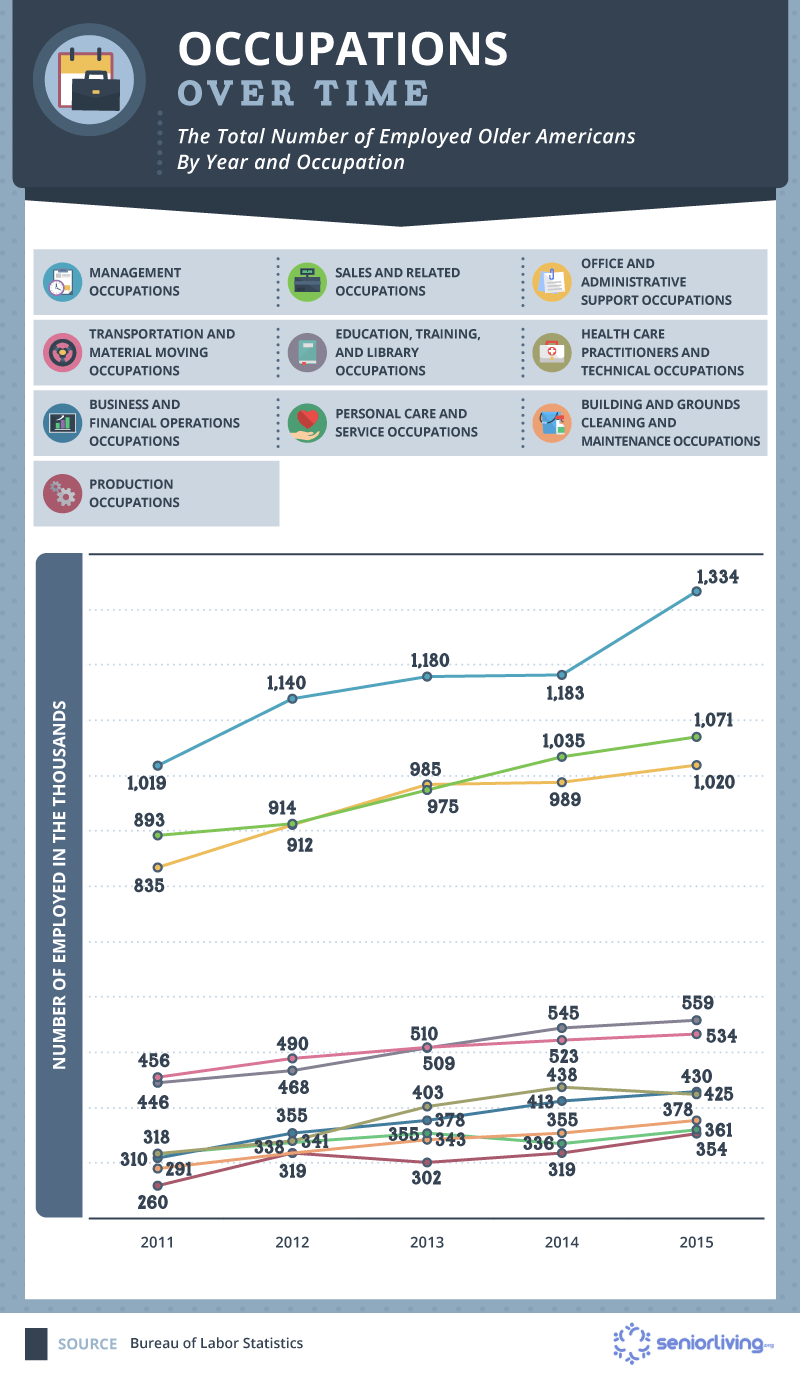 The sector with the smallest number of employed older Americans also saw a significant increase from 2011 to 2015, despite its overall low employment population of seniors. Production occupations, in 2011, employed 260,000 older Americans, increasing by around 36 percent to 354,000 elderly workers in 2015. 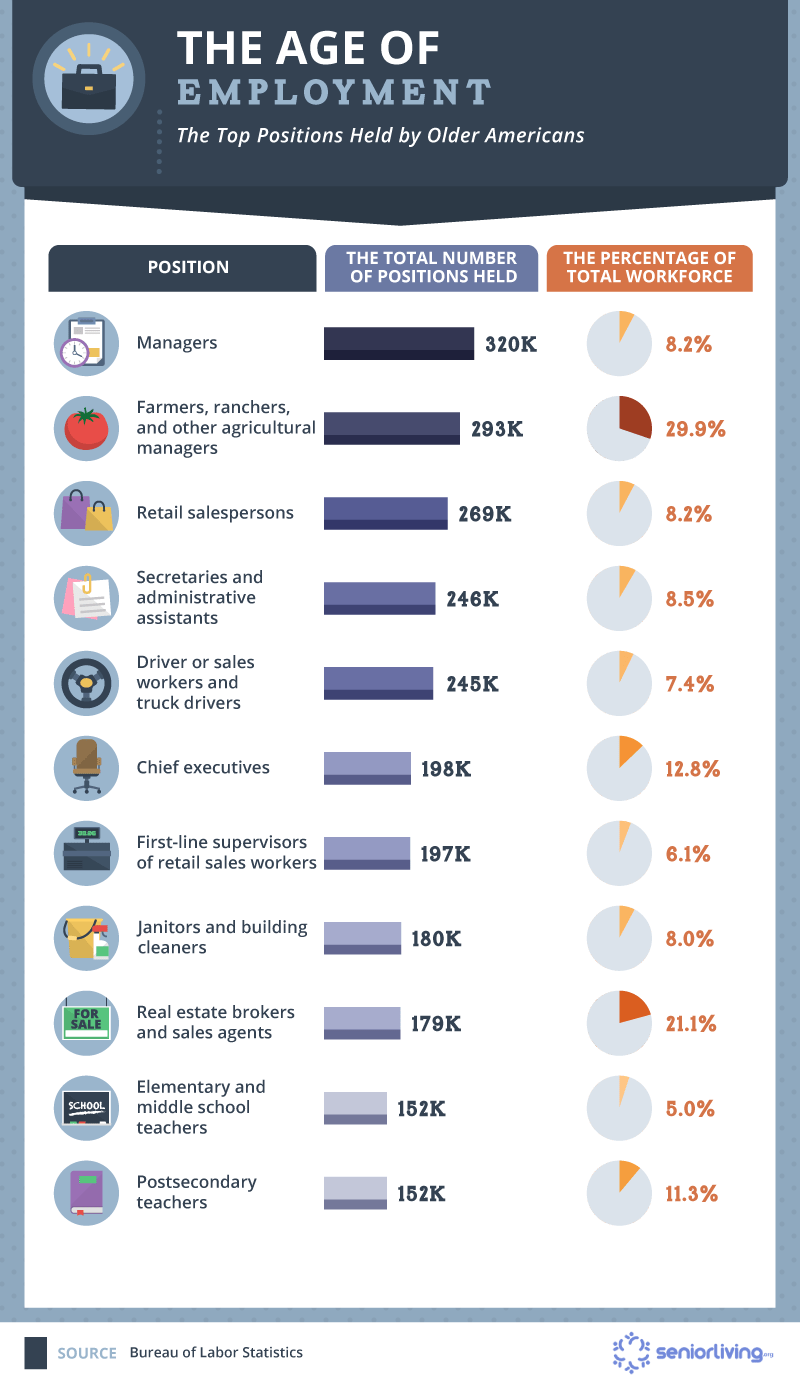 Over time, certain skills can become harder to grasp due to normal aging effects. As expected, a decline in specific skills can limit the number of jobs an older person may be able to perform. So which positions are older Americans most able to occupy? In 2016, they held the greatest number of managerial positions, but only made up a small percentage of the total workforce. At 320,000 employed older Americans, they only made up 8.2 percent of the workforce. However, the next position older Americans most occupied included farming. With 293,000 farmer, ranchers, and other agricultural management positions held by those 65 and older, these Americans made up nearly 30 percent of the total workforce – the largest percentage of all top positions held by this demographic.

Older Americans occupied the fewest number of positions as teachers – elementary, middle, and postsecondary. While the 152,000 older Americans who taught elementary and middle school made up only 5 percent of the total workforce, older postsecondary teachers made up 11.3 percent. Despite universities trying to buy out older professors, retirement offers are being declined so tenured staff can continue working postsecondary teaching positions – with 15 percent planning to stay until they’re 80. 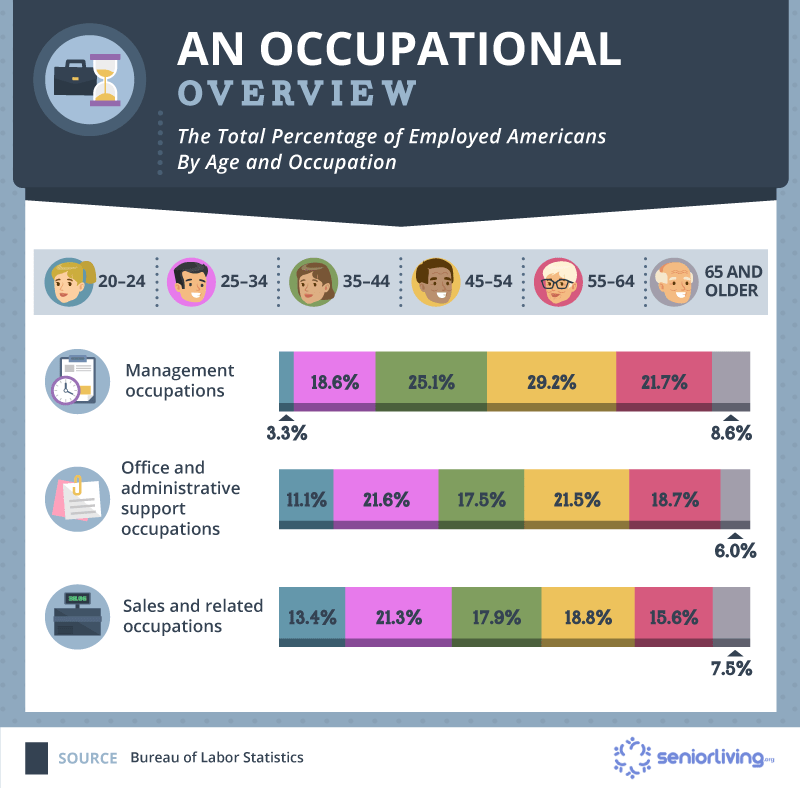 We narrowed down the most common jobs to the top three and then broke the data down by age to see if the age composition changed from job to job. While the differences were mostly slight – the biggest difference being the percentage of 20- to 24-year-olds in management occupations compared to other occupations – older Americans accounted for a larger percentage of management jobs than any other job type.

This deviation in management is likely due to the background one needs to qualify for these higher-level positions. Gaining the skills needed to become a manager takes time, and a certain amount of experience is often needed. Of course, with age comes experience and, therefore, management positions may weigh in the favor of older Americans. 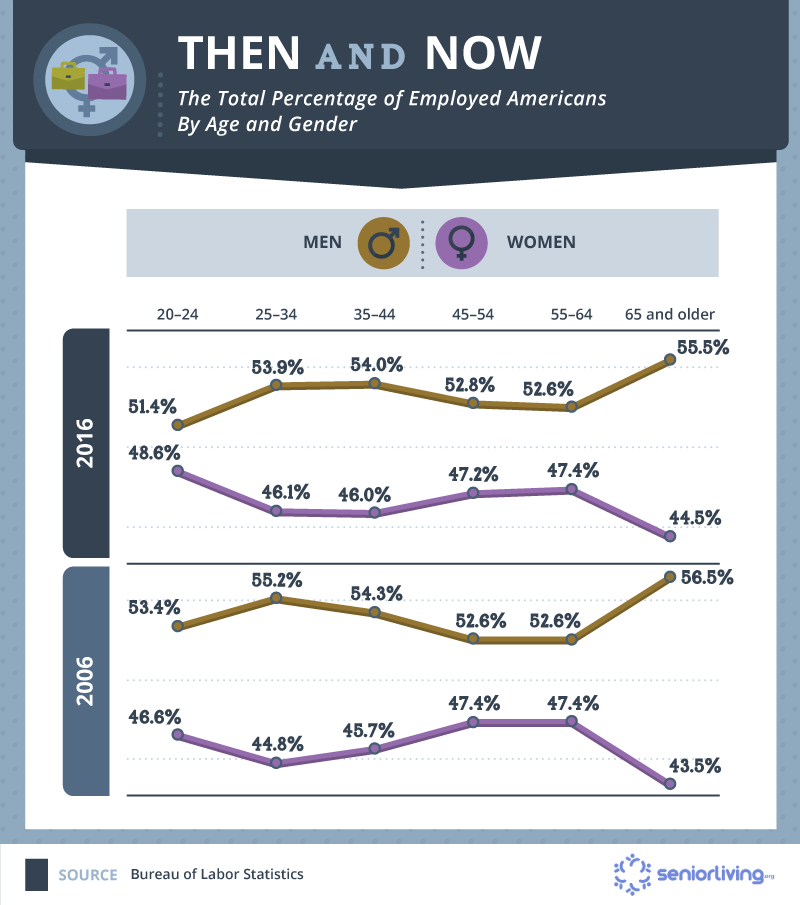 Most of us are aware of the gender gap in pay, but what about the gender gap concerning age? Over the last 10 years, the gender gap has shrunk or stayed roughly the same in every age group, the most significant change being among men and women between the ages of 20 and 24. The gap became smaller than ever in 2016, decreasing by four percentage points from 2006.

The gender gap for older Americans shrunk half as much as the youngest age group, but noticeable changes still occurred. There were fewer older men employed in 2016 compared to 10 years prior, and the percentage of employed older women increased by one percentage point. Interestingly, women who stay in the workforce longer tend to see more benefits from Social Security than men, which may be the incentive responsible for this disparity.

Retirement may still be the end goal for most Americans, but not all remain in a rush to do so. The workforce is aging, and older Americans who are a part of it not only reap benefits from Social Security but also to their health. However, working isn’t the only way to stay healthy through the golden years.

We analyzed data from the U.S. Bureau of Labor Statistics to see how many older individuals are in the workforce and changes in employment over time for older Americans. We also analyzed types of occupations as well as positions to determine how today’s older population is participating in the workforce, and how much that has changed since 2011. We also looked at gender participation by age and calculated how many older Americans make up the total workforce.

Feel like sharing our findings? Well, get to work! We grant you permission to use the images and content here for noncommercial purposes. Just don’t forget to link back to this page to give the authors proper credit.