Though Age Discrimination Charges Are Decreasing, Half of Workers Over 40 Feel Their Age Would Be a Hurdle in Job Search

The median age of an American worker is just over 42, and people over 45 account for almost half of all people employed in the U.S.1 But despite their significant contributions to the workforce, thousands of people over 40 file reports of workplace discrimination every year.

However, in the 50-plus years since the passing of the Age Discrimination in Employment Act (ADEA), some progress has been made. Employers are now more aware of what age discrimination is and how to avoid it, so age discrimination charges are being filed less frequently. Despite this progress, we discovered that many workers over the age of 40 are still concerned their age would hold them back if they re-entered the job market.

Following up on research we've conducted for the past few years, we asked more than 1,200 workers over the age of 40 about their experiences with workplace age discrimination and to better understand their concerns about ageism. Here are our key findings:

Around 1 in 10 Workers Over 40 Have Experienced Age Discrimination

Through the Age Discrimination in Employment Act (ADEA), the federal government prohibits employment discrimination against people 40 years of age or older. Many states also have their own laws that prohibit age discrimination regardless of a person's age.

Our study found that nine percent of currently-employed workers over 40 believed they'd experienced workplace discrimination. This could equate to as many as 6 million American workers. Age discrimination can take on a number of forms, but according to our study, these were most common:

Employment attorney and law professor Robert C. Bird explained that there is a fine line between behaviors that violate the ADEA and actions that are simply unprofessional. 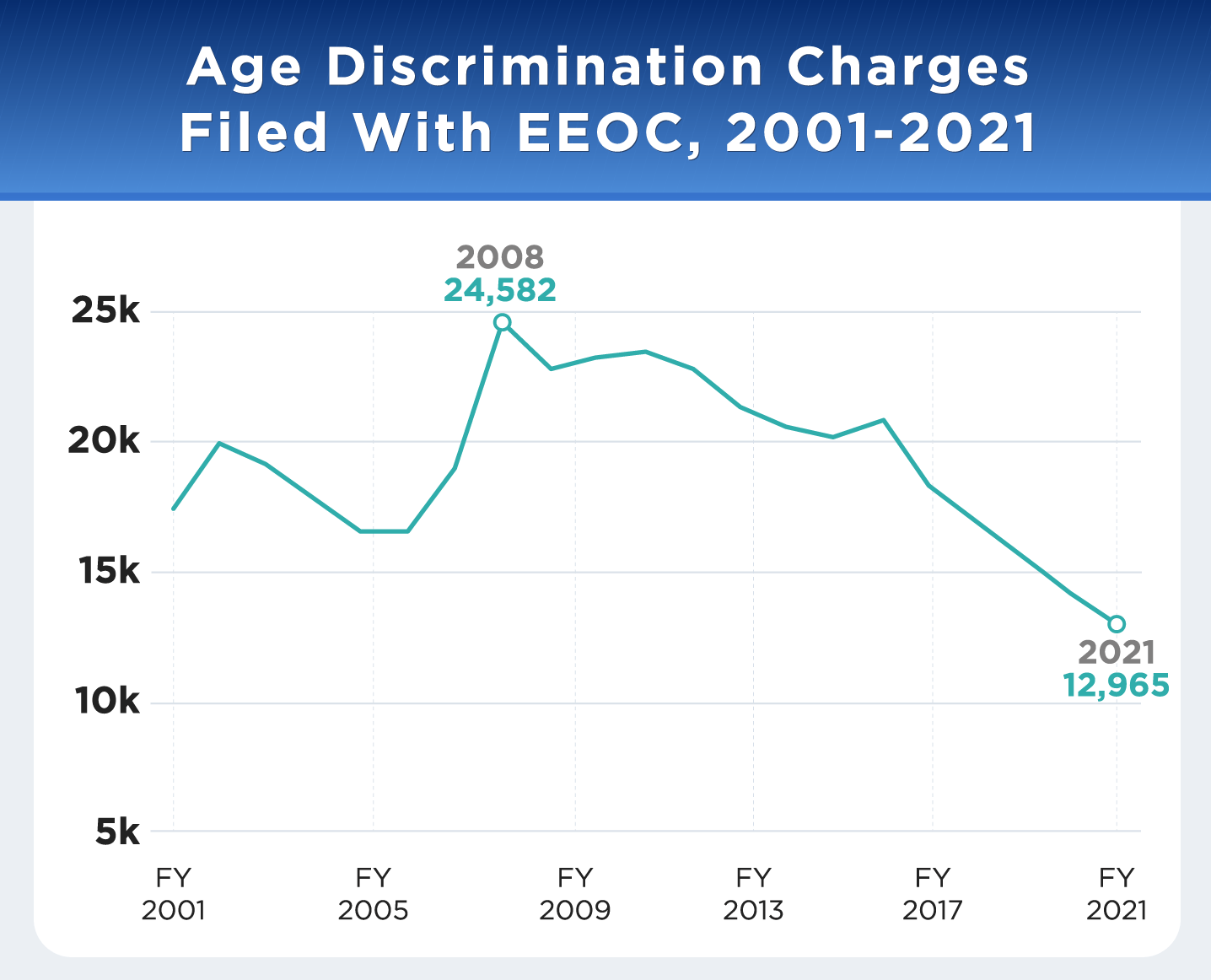 Employment attorney David C. Miller said current labor market conditions may be contributing to declining age discrimination charges. “For different reasons, employees have been hard to come by since early 2016, when the unemployment rate went below 5 percent and stayed there until the pandemic,” Miller said. “Now, we're in the ‘great resignation'. This may mean that employers are treating older workers with more, rather than less, deference to get them to stay.”

A recent CNBC poll supports Miller's theory. More than half of small businesses say it's harder now than it was in 2021 to find qualified applicants,3 so it's conceivable that experienced workers are having an easier time now finding jobs than they might have a few years ago.

Though these trends seem promising, figures from the EEOC likely underrepresent the true impact of age discrimination. According to our research, more than one in three individuals who'd experienced age discrimination did not report it to their employers or government officials. It's possible that workers are reporting age discrimination less frequently today than in the past, due to concerns about workplace retaliation or being unaware of the proper reporting channels.

Fifty-one percent of experienced workers said they believed their age could be a hurdle in finding a new job if they were to begin looking for one today. This represents a major increase from last year, when 41 percent of over-40 workers said the same.

While this is a legitimate concern, some workers who made later-stage career transitions have found that their age actually seemed to work in their favor.

“Law is my second career. I'd hesitated to go to law school because I was sure that no one would hire a 41-year-old baby lawyer,” Miller told us. “I was wrong. After I was hired and established in my first law job, I brought it up to a senior lawyer who was younger than me. She told me that the firm liked hiring new lawyers who were older because they were mature, businesslike, and tended to work harder.”

Making a career or job change can be daunting for those over age 40, but having the right mindset can make a huge difference according to career counselor Kristina Bennett Cheney.

“There is a mental game – it generally doesn't help to think a lot about being discriminated against. Some people will possibly, but many won't, especially if you do the work to polish your industry knowledge, resume, and career narrative (what you communicate about yourself and your career journey and goals),” she advised. Cheney also said older job seekers should look outside the job boards to find leads for new roles:

Among all participants, just over two in five said they had been the victim of any type of personal ageism. This includes making harmful generation-based claims, making ageist jokes, or disregarding concerns because of their age.

While older workers have many fewer years left in the workforce than their younger counterparts, that doesn't make them less important. In fact, for companies seeking to hire seasoned people, older workers bring experience that younger ones haven't had the time to gain. And given that they account for almost half of all Americans who work, the needs of older workers must be considered.