Author: 2020 Report on the Financial Confidence of America’s Seniors and Their Adult Children
· Updated: June 20, 2022

We originally conducted our research in February of this year, prior to the COVID-19 pandemic influencing American behavior and impacting stock markets.  We conducted follow-up research during the week of March 22nd, which provides an interesting perspective on preparedness, security and confidence.

Here's a summary of our key findings:

Seniors report similar concerns about their financial security in recent weeks as adult children do of their senior parents, with 43 percent of both groups reporting being “concerned” or “very concerned”. 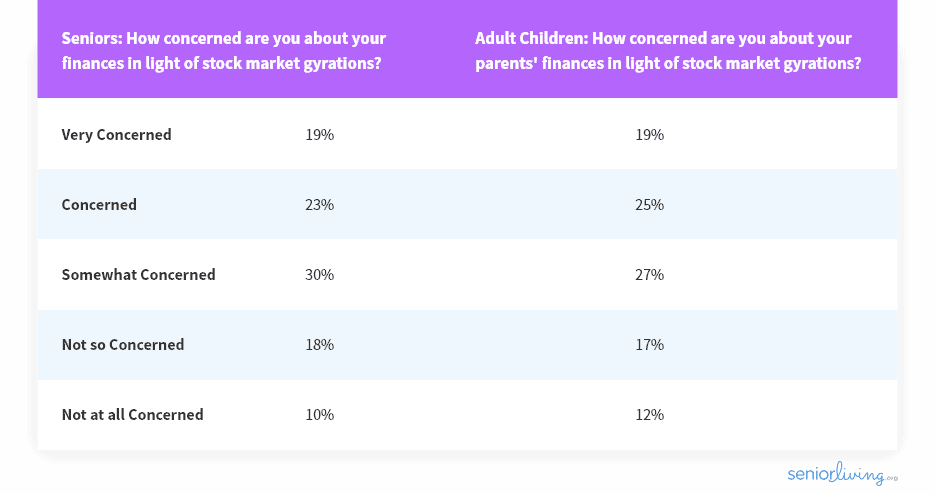 We asked seniors their greatest financial concerns in February, and affording healthcare was number one.  Grown children of seniors had the same concern about their parents.

Both groups reported similar concerns and rankings, with children more concerned about “running out of money” while more seniors expressed this as “maintaining the same lifestyle.”

Among 65+ adults who chose the “other” option as their primary fear, the most common concerns they listed were the costs of long-term care and leaving enough funds for their survivors, whether spouses or children. 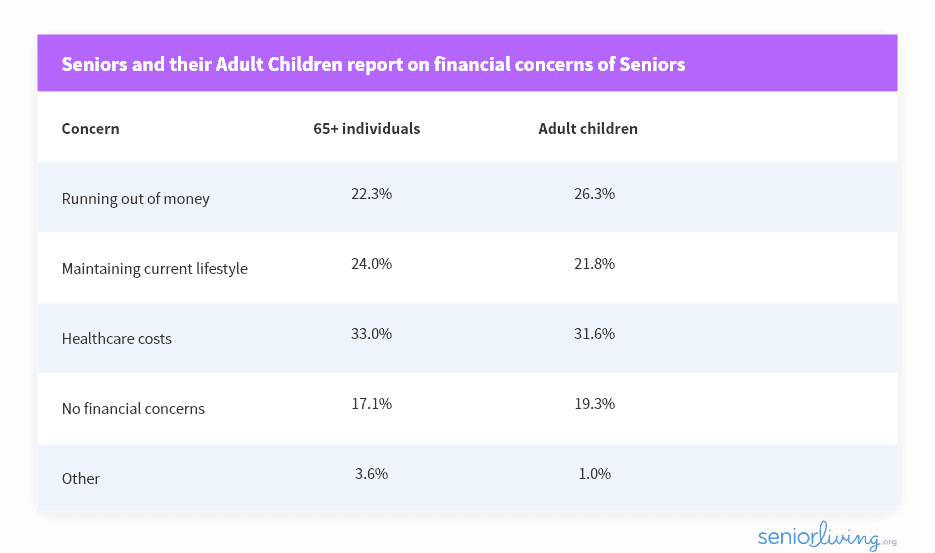 Men in the 65-and-up age bracket have much less concern about having ample funds as well as finances in general, with men being far more likely to cite no financial concerns (19.6% vs. 12.4%) and women being more likely to say running out of money is their primary financial fear (25.9% vs. 19.1%). 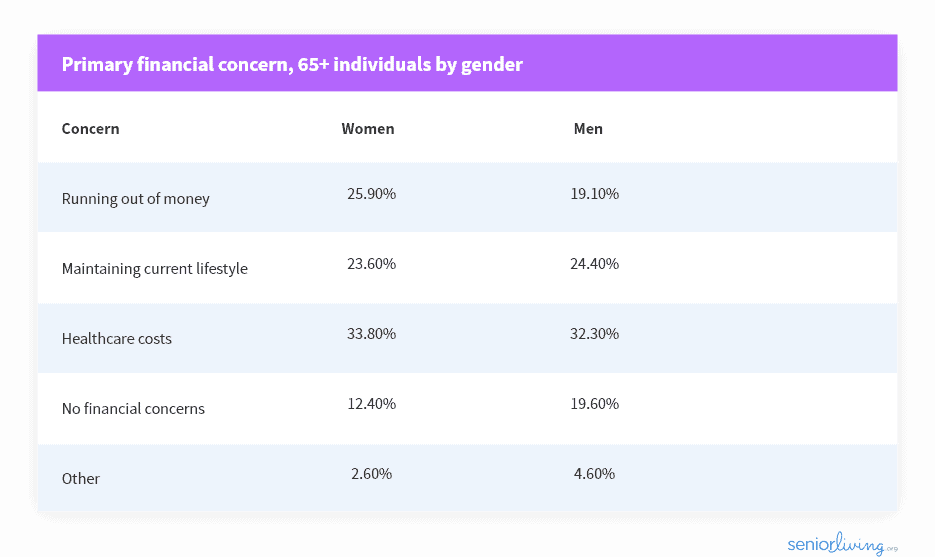 As one might expect, financial fears depend largely on income, and those on the lower end of the scale have more urgent concerns like paying for medical care and ensuring they have enough money, while higher-income individuals who do have financial concerns fear not being able to maintain their current lifestyle. Those with income in excess of $200,000 per year were nearly three times more likely to report not having any financial concerns than those earning under $50,000. 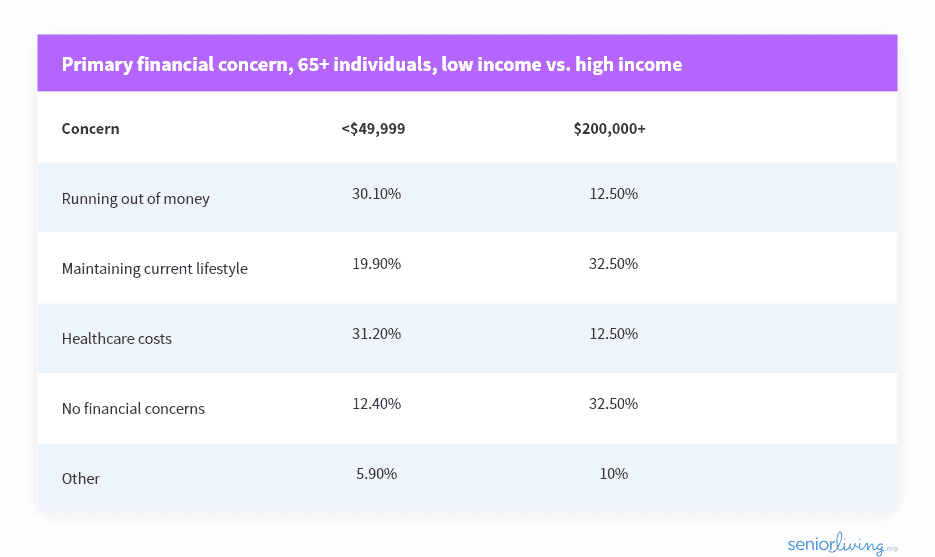 3. Discussing Finances With Your Children (or Parents) 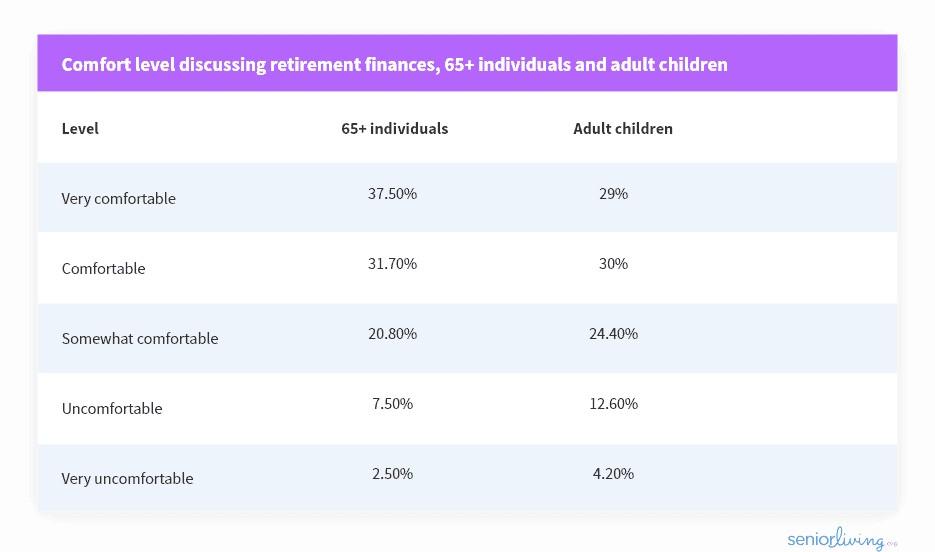 Our survey found a similar disconnect between retirement-age people and their adult children when it comes to giving their children (or someone else) power of attorney, or the authority to act on their behalf in legal or financial matters. While majorities of both groups indicated that the plan would be to authorize power of attorney, those in the older age group were far more likely to say so (69.9% vs. 57.9%) and adult children were about twice as likely than people in their parents' age group to report being unsure about their plans. 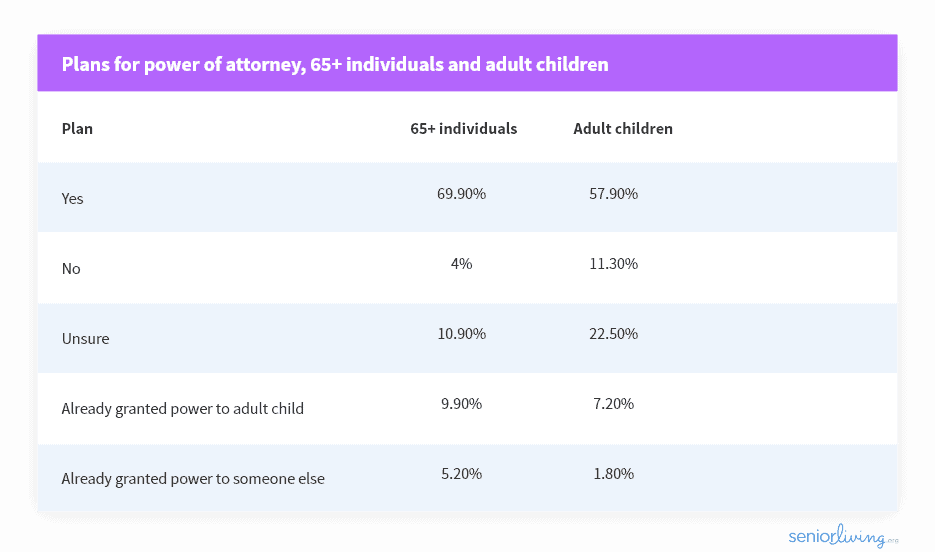 How about seniors receiving financial assistance from their children?  Two-thirds of seniors expect to not need financial help, and just 7 percent expect to need help (the rest are unsure).

This is quite a different answer than their children provide.  Just one-third of adult children expect their parents to not need financial help, and 39 percent do expect to provide financial support or already do provide it.

Our research finds divergences between older adults and their grown children across a range of issues, from discussing finances to perceptions of retirement preparedness, but the living situation of older adults proved to be the biggest diverging point of all. While both groups were most likely to say they'd continue living in their homes, the two groups don't see eye-to-eye about much else when it comes to living arrangements.

The single biggest divide was found in plans for moving to senior living, such as an assisted living facility or a nursing home, an arrangement that nearly one-third of older adults are planning for but which only 4.4% of their adult children are. Similarly, adult children were nearly three times as likely to say they were planning for their parents to live with them if they need assistance during retirement (20.5% vs. 7.7%). 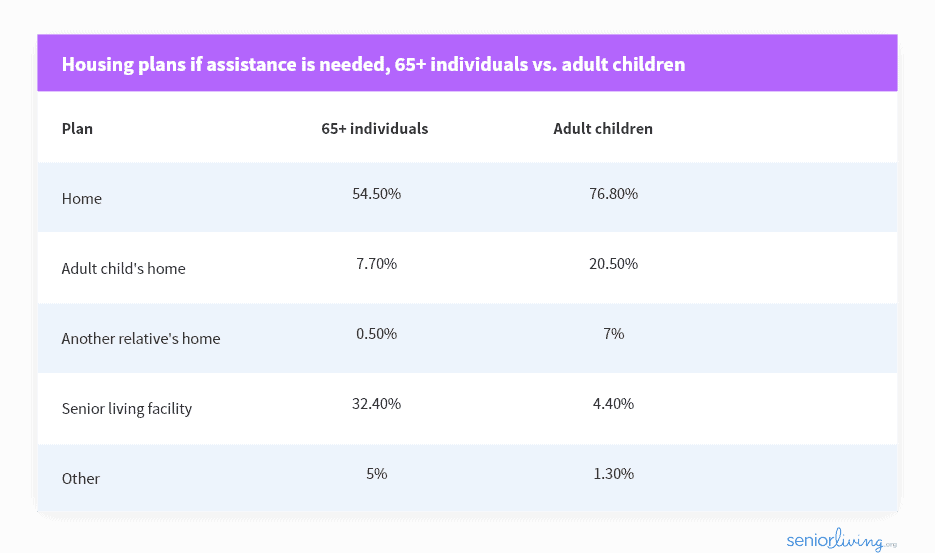 Finally, while our research found that most older adults said they're comfortable discussing their financial situation with their grown children, they are much less likely to say they're comfortable with their children taking an active role in decision-making about housing. Nearly two-thirds of the adult children's group said they wanted to be very involved in making these decisions, only about 37.5% of their parents' group agreed. 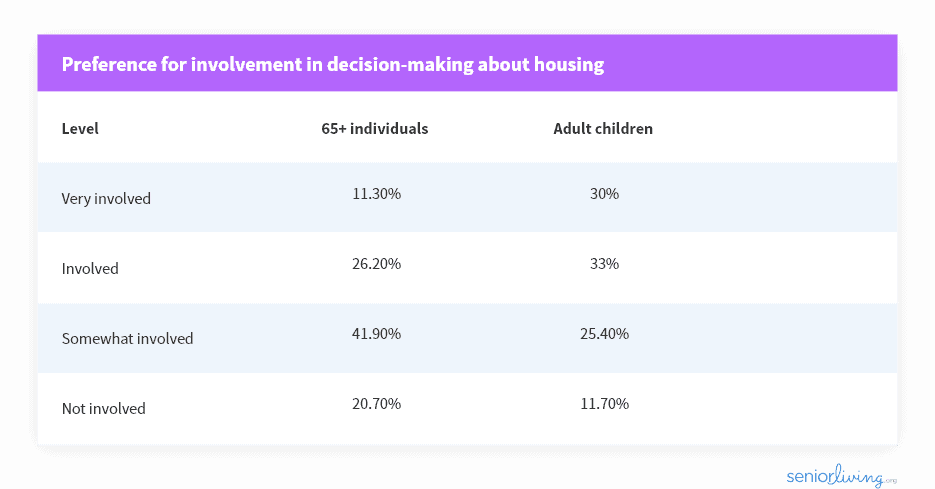 Most older adults believe they are prepared to tackle the challenges of retirement, though their grown children may not agree. However, knowing that the adult children of those 65 and older are largely uncomfortable talking to their parents about finances, it's likely that adult children aren't all that well-informed about where their parents stand in retirement planning.

About two-thirds of individuals 65 and older say they are prepared for retirement, but a troublingly large group (more than 1 in 10) say they are unprepared or very unprepared for a life without income from their jobs. Considering that this group is at most two years away from reaching 67, the age at which most people can claim their full Social Security benefit, this doesn't bode well for potentially thousands of older adults. 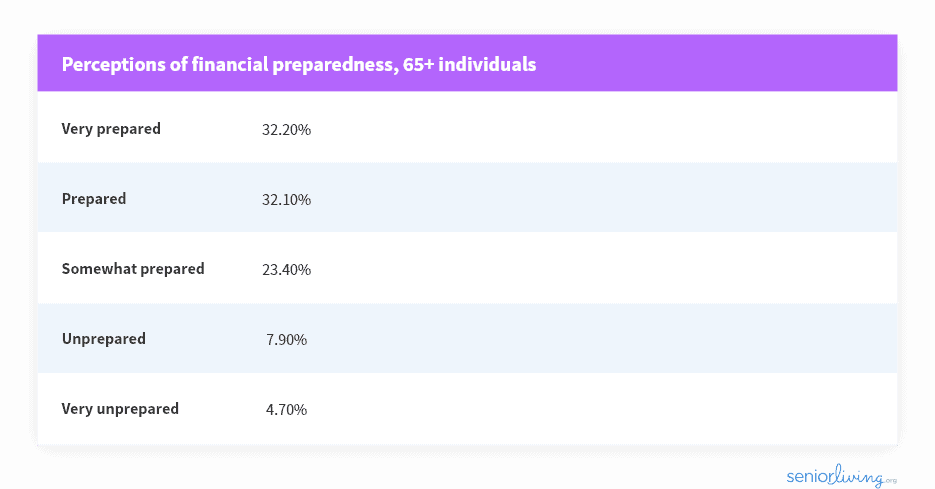 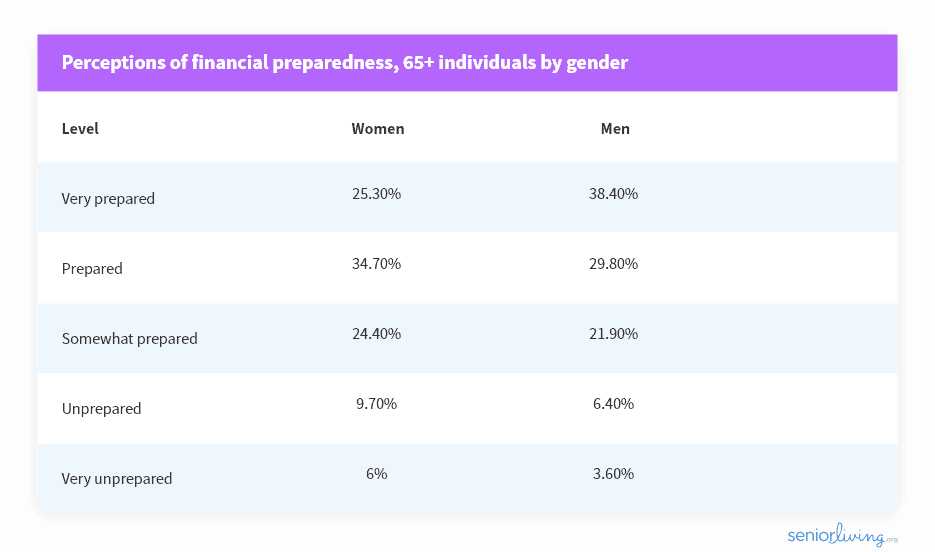 Of course, income-based differences exist as with fears over financial matters, but they are especially stark here. Among respondents who make less than $50,000, only about 13% say they are very prepared, while nearly 60% of high-income individuals said the same. And more than 1 in 4 low-income respondents report being unprepared for retirement, which is more than double the rate in the 65-and-older group overall. 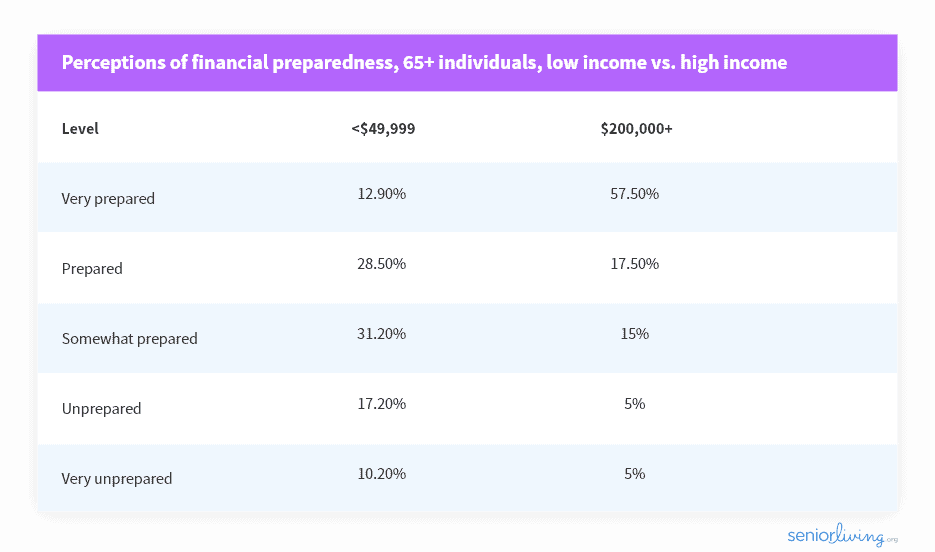 Consulting with a finance professional appears to have a considerable impact on the ease with which people think about retirement. In fact, having met with a financial adviser reduced by half the percentage of people 65 and older who feel unprepared for retirement. 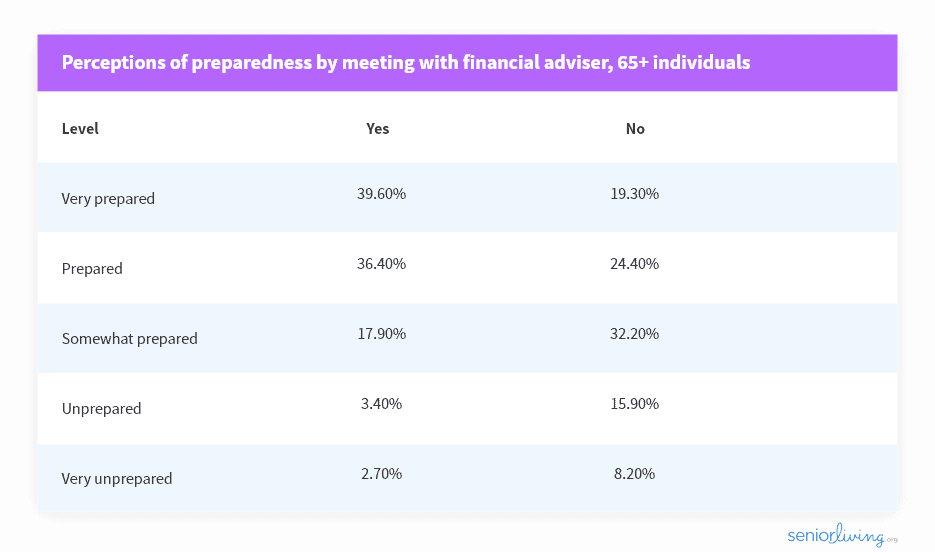 We surveyed more than 1,300 American adults 65 and older and asked about their financial preparedness for retirement, what fears they have about retirement, their opinions about how involved they want their adult children to be in their retirement planning decisions and other issues. Similarly, we surveyed more than 1,300 Americans under 65 with at least one living parent or stepparent who identified as being financially independent. We asked them the same questions but about their perceptions of their parents' readiness. The first section comes from surveys conducted the week of March 23rd.  Subsequent sections come from surveys conducted in February 2020.