How Old Is Your State?

More than 52 million Americans are over the age of 65, which represents about 16% of the overall U.S. population. That’s a number nearly the same size as adults under 30 and is a larger group than either 30-year-olds or 40-year-olds.

Folks at or near retirement age will make up an estimated 1 in 5 Americans by 2030, and by 2034, the number of people 65 and older will outnumber children in the U.S. America will grow in that time, but an even deeper trend indicates that it may grow older more dramatically than it grows in numbers.

An increasingly aging populace presents a raft of policy challenges from healthcare to housing to retirement and dozens of others. But data indicates some states may be harder hit by the graying of the American population than others.

Without involving the often thorny topic of which policy initiatives can best address aging and serve an older population, we wanted to look at which states have the highest numbers and percentages of older people, where that age group has seen the most growth and what the next decade might have in store for us.

Before we can analyze how many seniors live in each state, let’s first acknowledge the limitations of the terminology related to older Americans. Many people understandably consider the term “senior citizen” patronizing; an NPR poll a few years back revealed that less than 12% of people polled liked the term “senior citizen,” but even the highest-polling term, “older adult,” garnered only about 43% favorability.

The second major limitation with vocabulary is defining what ages apply. It’s possible to get senior discounts at stores as young as 50, but most 50-year-olds have almost two decades of work ahead of them, so it’s tough to say they really qualify as being in their golden years. For the purposes of this analysis, we’ve limited our scope to those who are 65 and older, as that will allow us to filter out most people who aren’t yet retirement age.

Where Do Most
Older Adults Live?

Two states already have crossed the 1-in-5 older adult threshold that the entire country will likely cross by 2030, and the state with the highest percentage of people 65 and older may come as a surprise. No, it’s not Florida — but just barely. 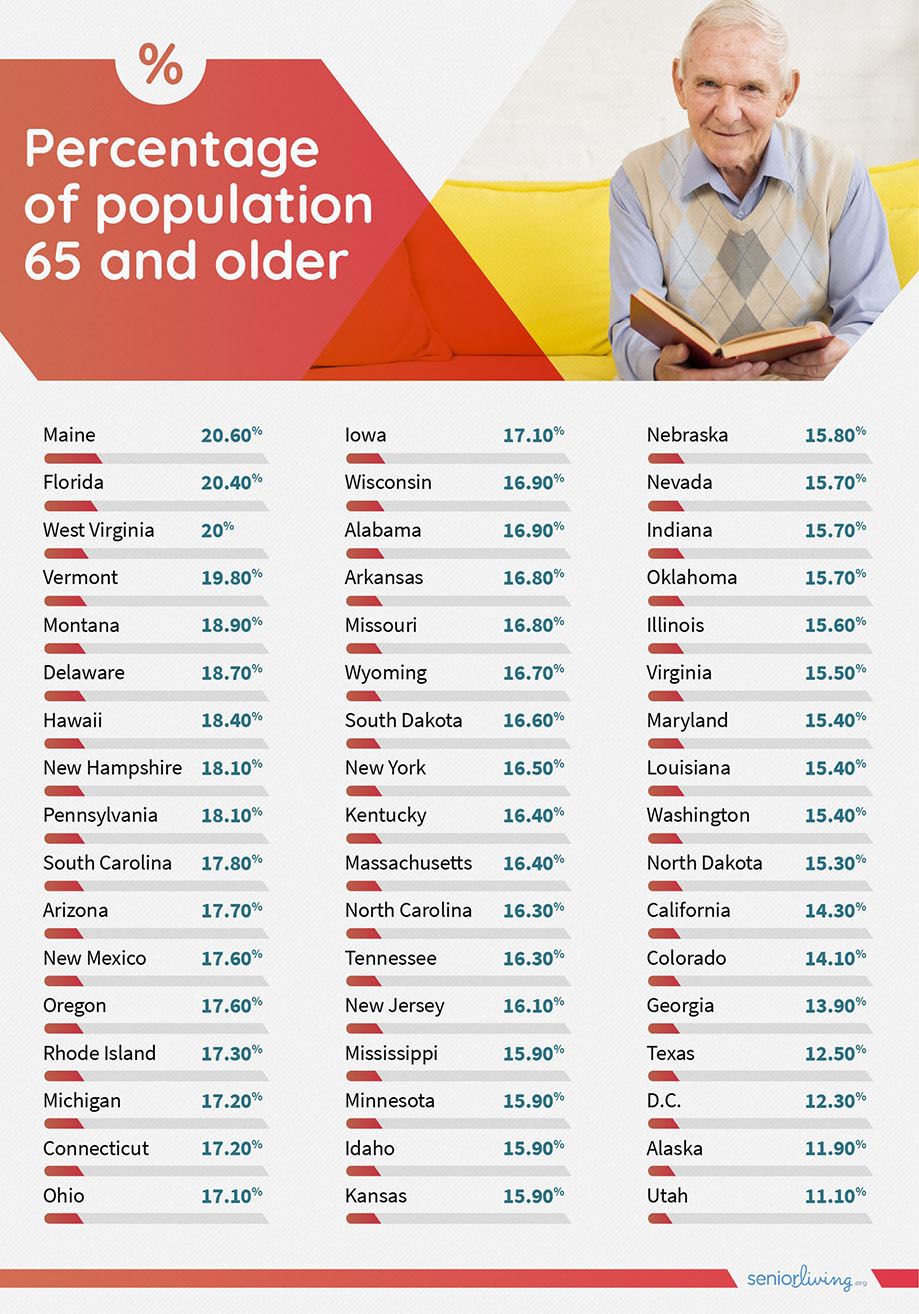 Maine has the highest percentage of residents 65 and older among its population, 20.6%, which is just ahead of retirement hotspot Florida at 20.4%. Other popular retirement and snowbird destinations like Hawaii (No. 7 overall) and Arizona (No. 11 overall) also outperformed the national rate of 16%. At the other end of the spectrum, just over 1 in 10 people in Utah are older than 65, with Alaska coming in ahead of Utah at 11.9%.

Of course, this is an age group that spans decades, and so splitting the group up can help provide even more context. In every state, the largest subgroup are those between the ages of 65 and 74. About 30.5 million people are in this group, accounting for 9% of all Americans. The oldest Americans, those 85 and over, account for about 6.5 million, or 2% nationally.

As with the percentage of all adults 65 and older, similar variations can be detected on the state level when splitting the larger group into three smaller subsets — 64-74, 75-84, 85+. Want to get even more granular? About 93,000 Americans are over 100 years old.

The 65-to-74 set is most dominant in Maine, while Florida has the highest percentage of those 75 to 84, and Hawaii sets the bar for people 85 and older. 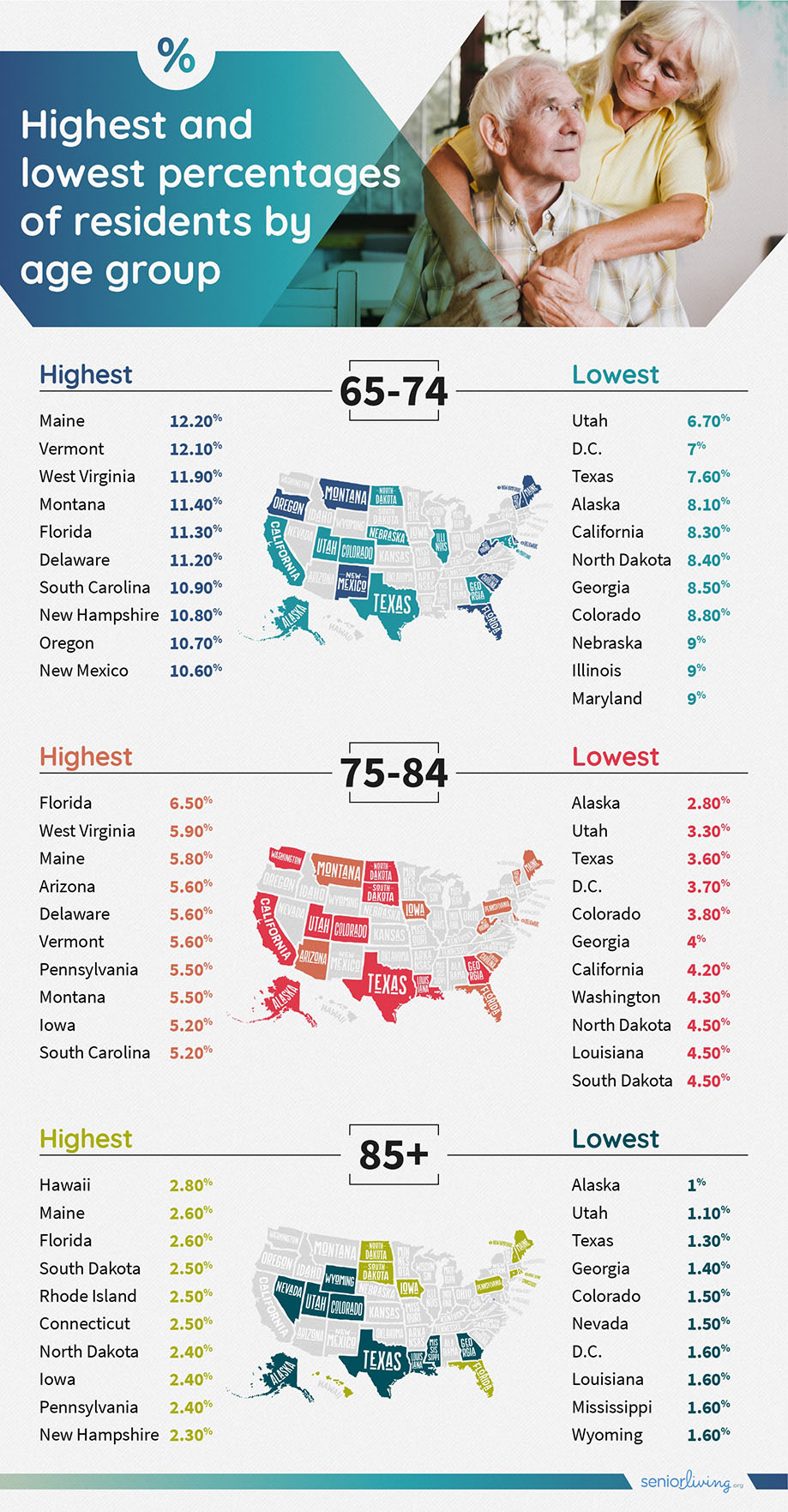 Nearly a decade ago, Florida had the nation’s largest percentage of residents 65 and older, and Maine, which is now No. 1, ranked third. No state has seen its older adult population decline as a percentage of its overall population, and most states have seen increases in the 20%-30% range, though a few have had more dramatic jumps. 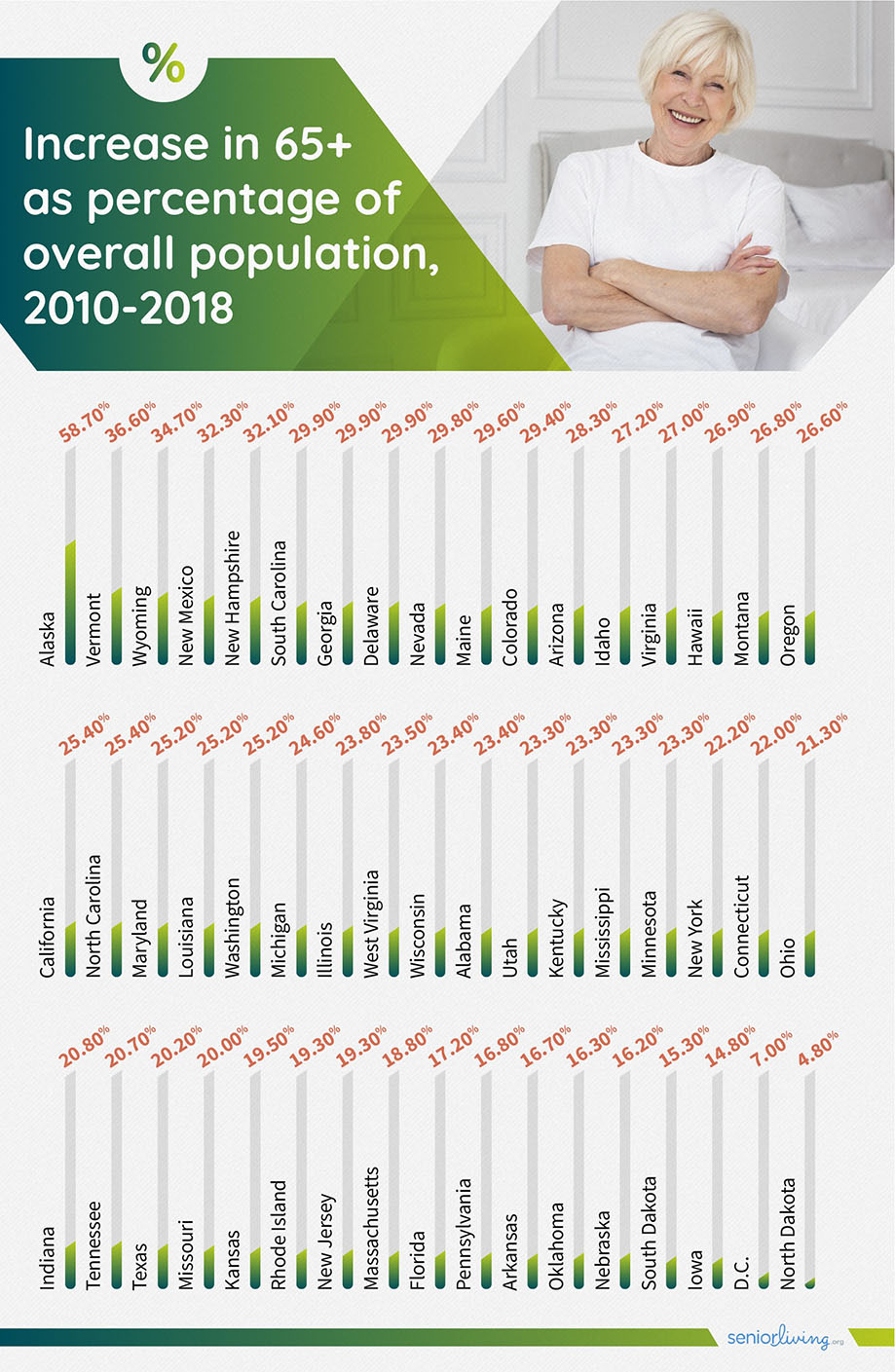 Unlike the broader 65-and-older population, several states have seen certain groups shrink over the better part of the past decade, though each age group has mostly seen its numbers climb since 2010. 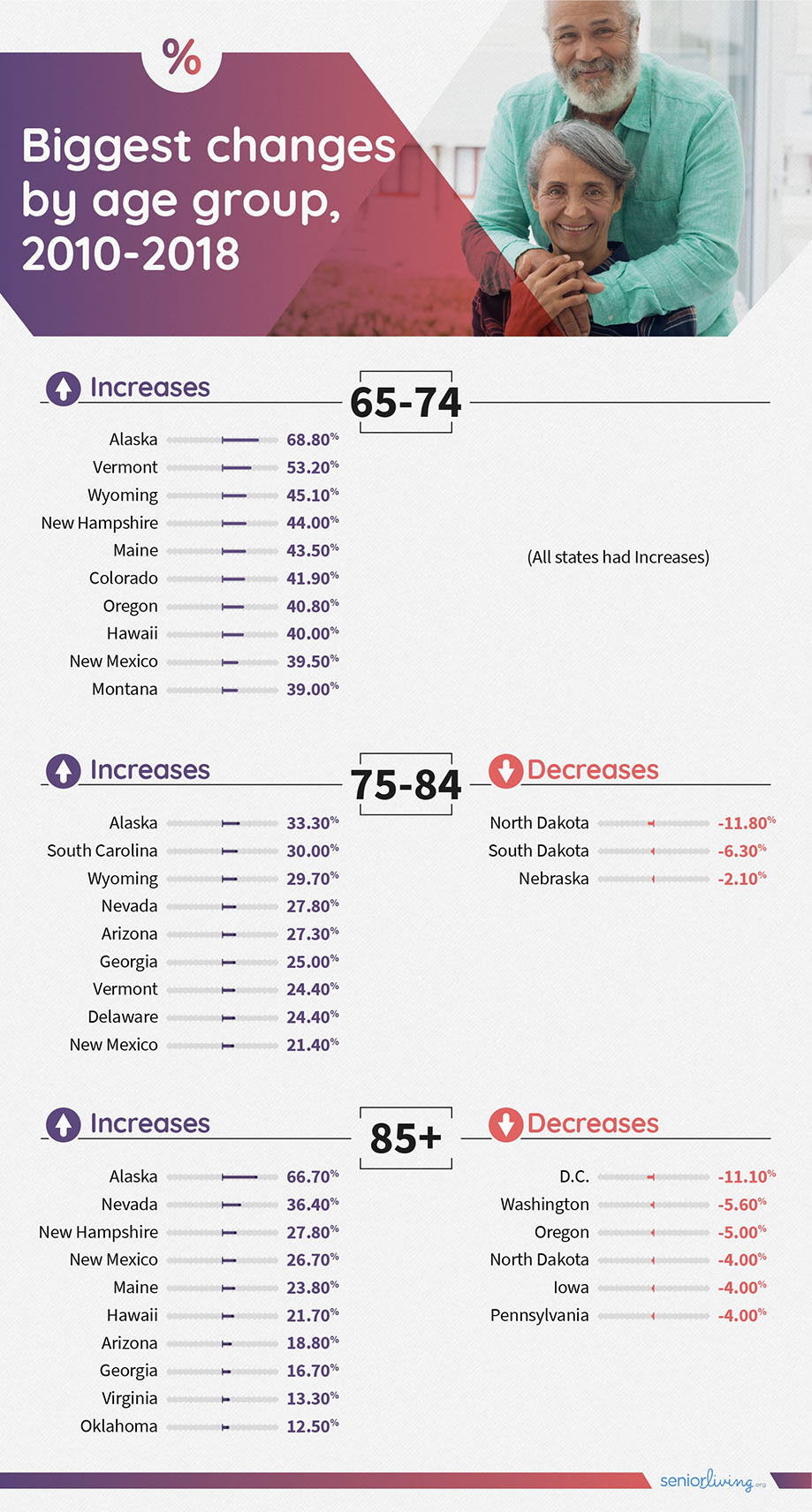 What Does the Future Hold?

As we’ve discussed, in just over a decade, 1 in 5 Americans will be old enough to collect Social Security (or close to it, depending on how the next decade of public policy shakes out). Every state is projected to see an increase in its percentage of adults over 65, though some changes will be much more dramatic than others, and some subgroups will see their numbers decline in that time.

According to projections, the most dramatic expansion of the 65-and-older population will be in North Dakota, where that group will grow by 64%. Among the 10 highest projected growth rates, four states are in the Midwest, three are in the West, two are in the South and one is in the Northeast. 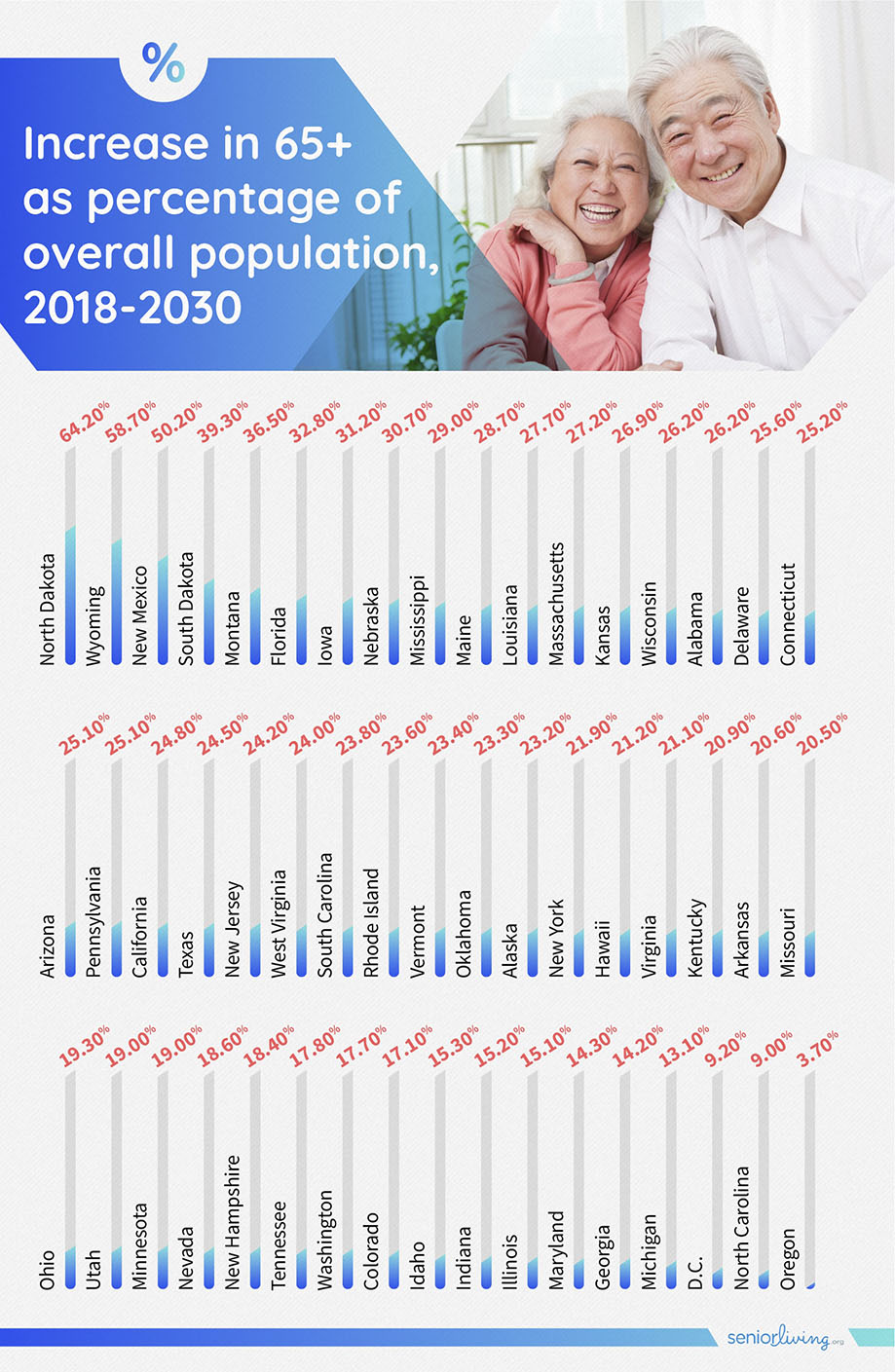 If those projections hold up, North Dakota will return to the top 10, while Florida will leapfrog Maine as the grayest state. Utah is still expected to have the smallest concentration of those 65 and older despite a 19% increase in the age group.

Narrowing the group down by age range shows that most but not all of the states will see the 65-74 group increase, while every state will see the other two groups grow. The largest change is the 131.3% increase projected in the size of the 85-and-up population in Wyoming, while the largest decline of any state is the -14.1% change expected among Oregonians between the ages of 65 and 74. 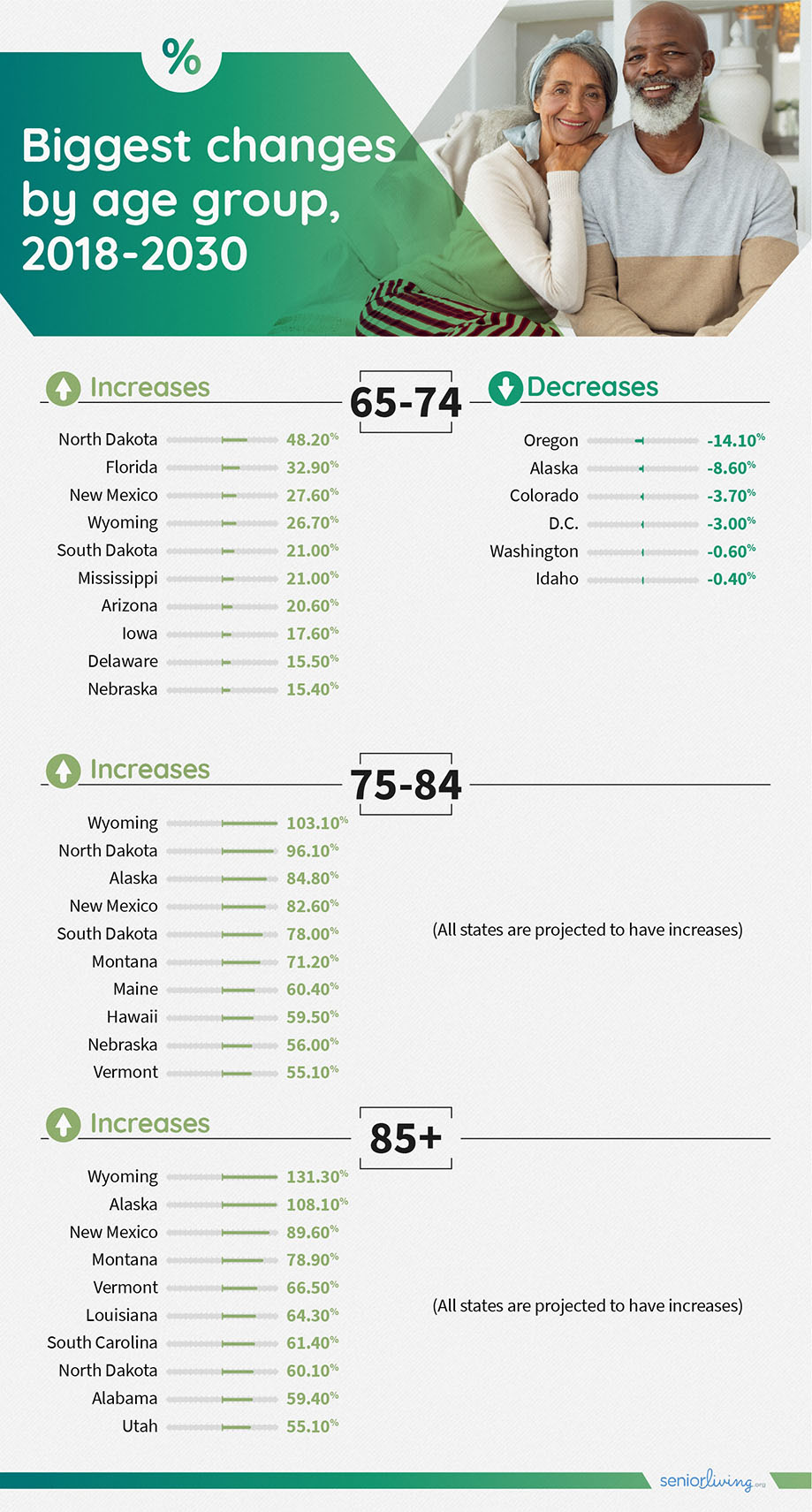 Today, the median age of an American is far from retirement (38), and that number won’t get to 65 anytime soon. But over the next several decades, the median age of Americans will climb considerably in addition to the increases we’ve seen since 2010.

Maine has the nation’s highest current median age at 45.1 year, two years higher than the next-closest state, New Hampshire. A total of 11 states have median ages north of 40, while Utah is the youngest state, with a median age of just 31.

The face of the typical American will grow about five years older than it is today by 2060. Sure, that’s a long way off, but most states have already seen major increases over the past decade in their populations of older adults, and those trends look to continue well into the future. As we continue through the 2020 election cycle, the unique needs of Americans 65 and older can hardly be seen as a special interest.

Here’s a look at the specific data used to compile this report and the sources we used:

Today’s population: To rank which states’ percentage of residents 65 and older were highest and how those ratios had changed over time, we used data from 2018 and 2010 (which is the oldest year for this particular dataset), both of which can be accessed here. That table also includes a breakdown of the age group subsets for each state, both for 2018 and over time.

You are free to share the information and images contained on this page at no cost for any noncommercial purposes. For those who wish to share this analysis with their audience, simply include a link to the URL of this page in your work.