An estimated 30 million older adults are dealing with hearing loss, according to the most recent estimates from federal health officials.

While many products have been developed to help mitigate hearing loss, most prominently hearing aids, many of these devices are quite expensive, and there's no single standard across the country for whether hearing aids are covered by health insurance.

Read on for our full study, but check out the high-level results here:

Using data from the National Institutes of Health and the U.S. Census Bureau, we estimate that upwards of 30 million Americans 55 and older have hearing loss. We asked nearly 650 adults age 55 and up about their hearing, including nearly 200 adults that have been diagnosed by an audiologist as having hearing loss.

Just over two in five respondents in our survey with hearing loss said they used hearing aids, with 58 percent saying they don't. Our survey found that hearing aid use generally rises with age, and this would seem to track with NIH data that shows hearing loss becomes more common the older a person gets. It's important to note that our survey was limited to those who have been diagnosed with hearing loss, which is not necessarily the same as having hearing loss, as many people with hearing trouble either don't realize it or don't seek help for it.

Still, our survey found that while just over one in five of those in the youngest age bracket of adults diagnosed with hearing loss are using hearing aids, it's about three times more common for those 85 and older to say the same. 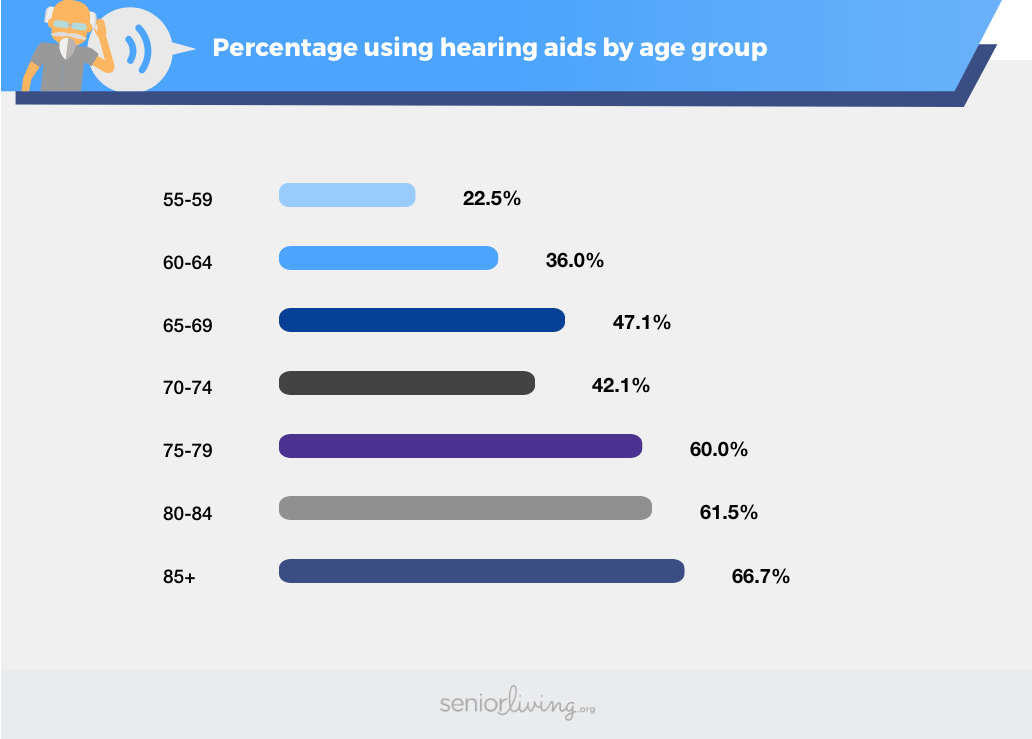 A majority of respondents in our survey don't use hearing aids despite being diagnosed with hearing loss. What's stopping them? Aside from their belief that they are doing well without one, cost was the most commonly cited reason, with almost 40 percent of people saying the devices are too expensive. 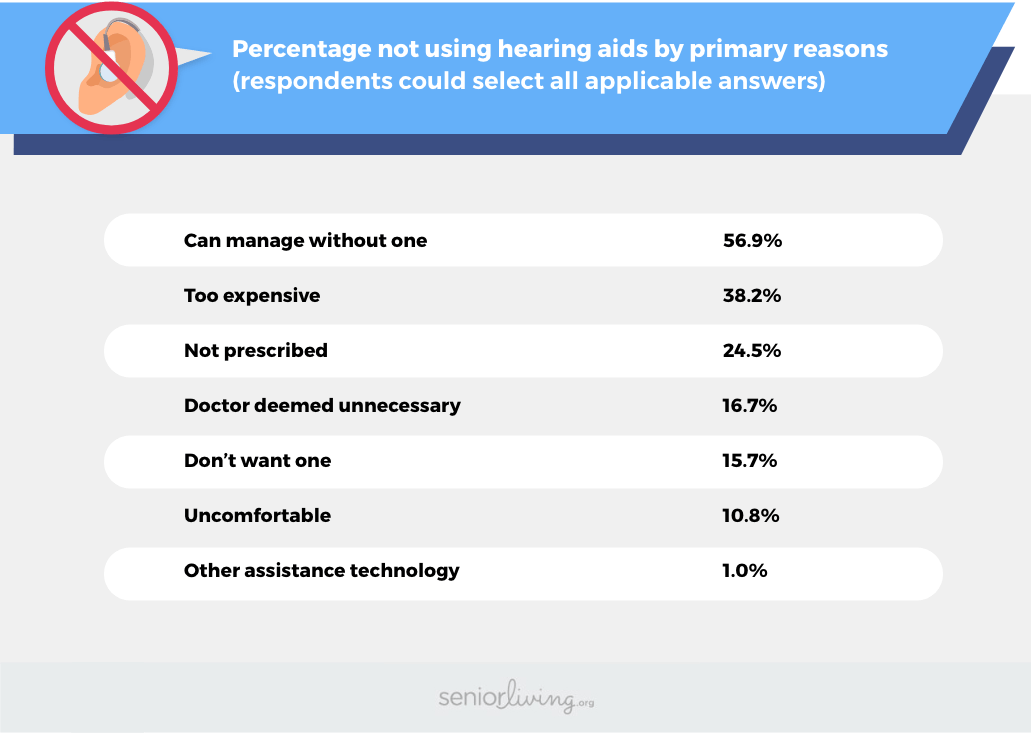 Using the estimate of about 30 million older adults with hearing loss, which we believe to be conservative based on the age of Census and NIH data, our data shows that about 6.6 million seniors who believe they would benefit from using hearing aids are unable to do so because of the expense involved.

The third most common response was that hearing aids had not been prescribed yet by their doctor, which indicates that as many as 4 million seniors would potentially benefit from widespread availability of over-the-counter hearing aid devices.

The average cost of prescription hearing aids is about $4,700 (for two), but over-the-counter models tend to be much lower, more in the range of $600 to $1,000, according to estimates.

That's not a surprise to our respondents. Among hearing aid users, the devices are considered very expensive, with more than three in four users (77.8 percent) saying the cost is too high.

Only about 4 percent rated hearing aids as well under their budgets, while about 18 percent said they were fairly priced.

For nearly one in three hearing aid users, price was the single biggest (or only) factor driving their purchase decisions, while about 22 percent said it wasn't a factor. Another big reason why allowing over-the-counter sale of hearing aids is important is because even among seniors who are on Medicaid, hearing aid-related services may not be covered. Medicaid covers hearing aid-related costs only under a narrow set of parameters, and most plans provide no coverage for hearing tests or other tests related to hearing aids.

We know from a broad set of medical studies that hearing aids and other assistive technologies are incredibly important for the physical and emotional health of those dealing with hearing impairment, including age-related hearing loss. 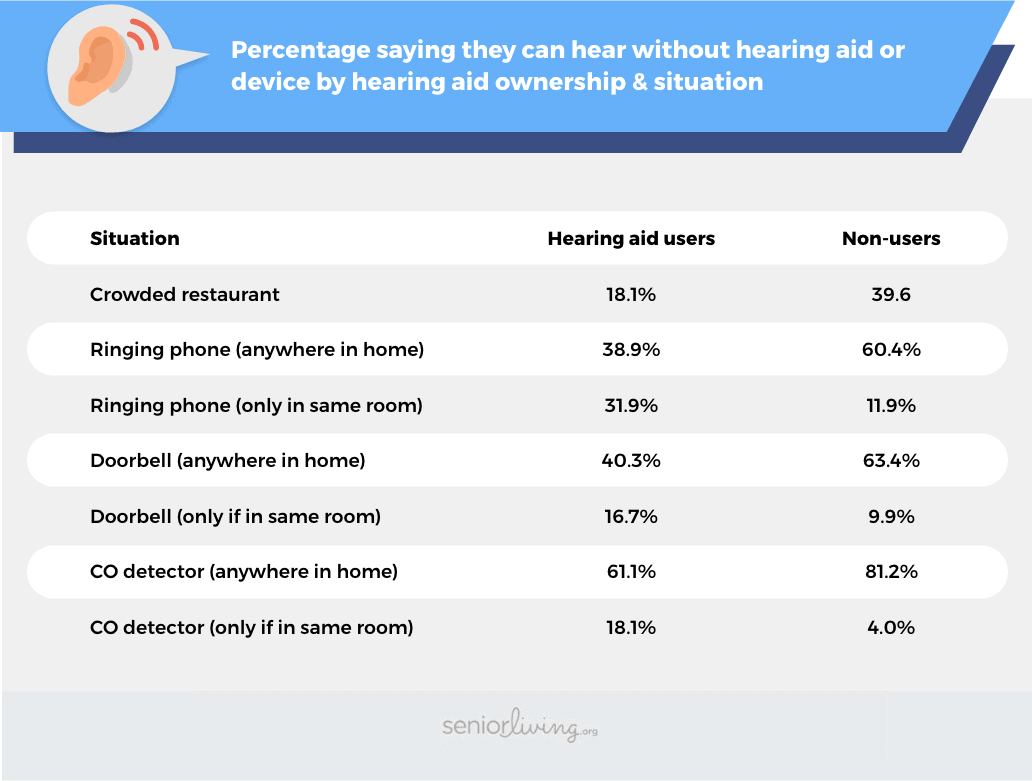 Our research indicates that more than 17 million adults who have been diagnosed with hearing loss don't use hearing aids or similar devices. While many say it's because they don't need one, it's tough to know how opinions might change if the expense of these notoriously pricey devices dropped.

SeniorLiving.org is where seniors and their loved ones can find and compare housing options for seniors, including assisted living, in-home care, and everything in-between. We publish research on issues facing assisted living and aging, and cover governmental programs, and economic and social issues facing seniors. We surveyed 644 adults age 55 and older about their hearing, including 176 adults who have been diagnosed by an audiologist with hearing loss. Our survey was conducted in July 2020.