When it comes to raising a child, there is no one right way to do it. There are multiple parenting styles, and it is up to parents to decide when, where, and how they want to broach certain topics with their children.

Cigarettes, drugs, politics, staying home alone – parents must dance a fine line between exposing their kids to difficult topics too early and waiting too long to discuss life's many challenges and hurdles. Age-related guidelines are available to help parents navigate the waters of appropriate conversations, but in the end, it is their call to make.

We surveyed 1,007 people to find out which ages they associate with a variety of challenging issues, the sensitive topics being discussed most frequently, and how gender and generational divides play a role in what parents see as acceptable behavior for their kids. Continue reading to see what we learned. 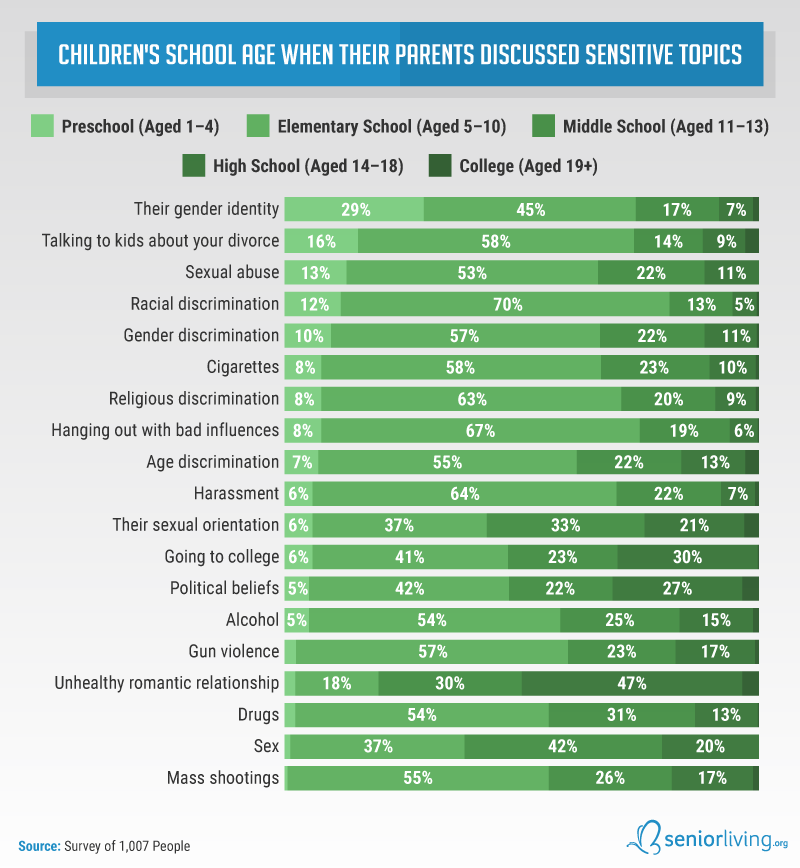 You're known by the company you keep, as the saying goes – and, on the whole, our respondents took their children's social development into account more than anything. Even as kids, the relationships we forge with our peers can have lasting effects on our future mental health and how well-adjusted we are as adults. 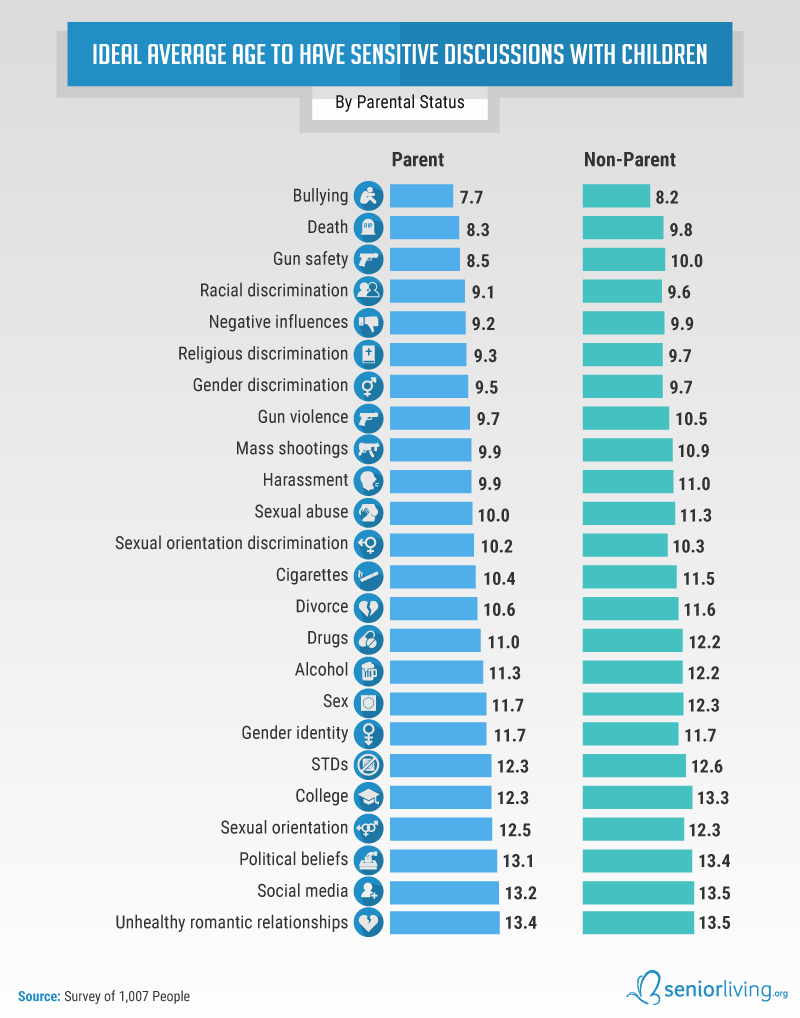 A lot can change when you have a child. Your family, social life, schedule, and priorities – among other things – undergo a fundamental shift as you transition into parenthood. So when it comes to appropriate ages for discussing challenging topics with kids, we wanted to know if and how parenthood skewed respondents' perspectives.

Interestingly enough, non-parents were more conservative with the grand majority of discussion topics but to varying degrees. There was only a handful – including sexual orientation discussions – that saw parents weighing in with an older suggested age than non-parents.

For example, while parents said that 8.5 was the ideal average age for talking about gun safety, non-parents wanted to wait until age 10. It is important to note that this conversation is just as relevant for families who have no guns at home, given that your child may know a classmate whose family owns a firearm. 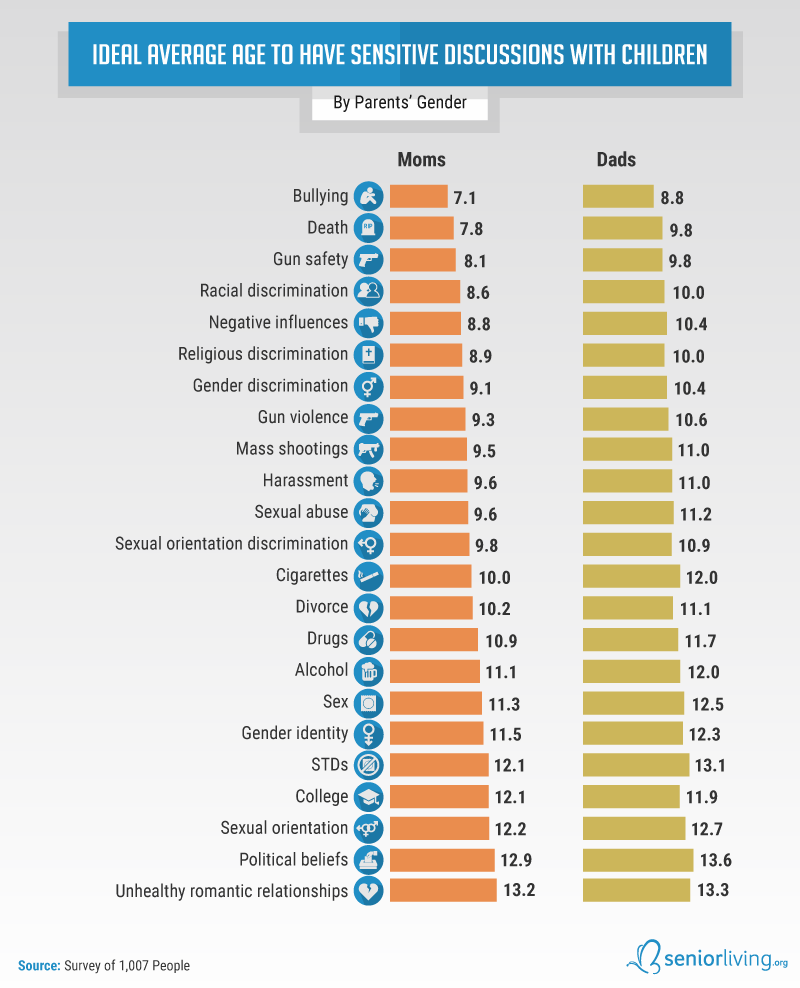 Discussing challenging topics, staying home alone, using social media … choosing the appropriate age to introduce a child to life's realities can be a huge responsibility. When it comes to having your child approach you with personal issues, age plays an extremely important role in healthy communication.

Among our respondents, fathers proved to be the more conservative half of a parental unit overall, even though moms are known to fret more than dads. While the discrepancy was usually down to a decimal when it came to the appropriate age to introduce or discuss any given topic, dads wanted to wait two years longer than moms to discuss death – at 9.8 and 7.8 years old, respectively. 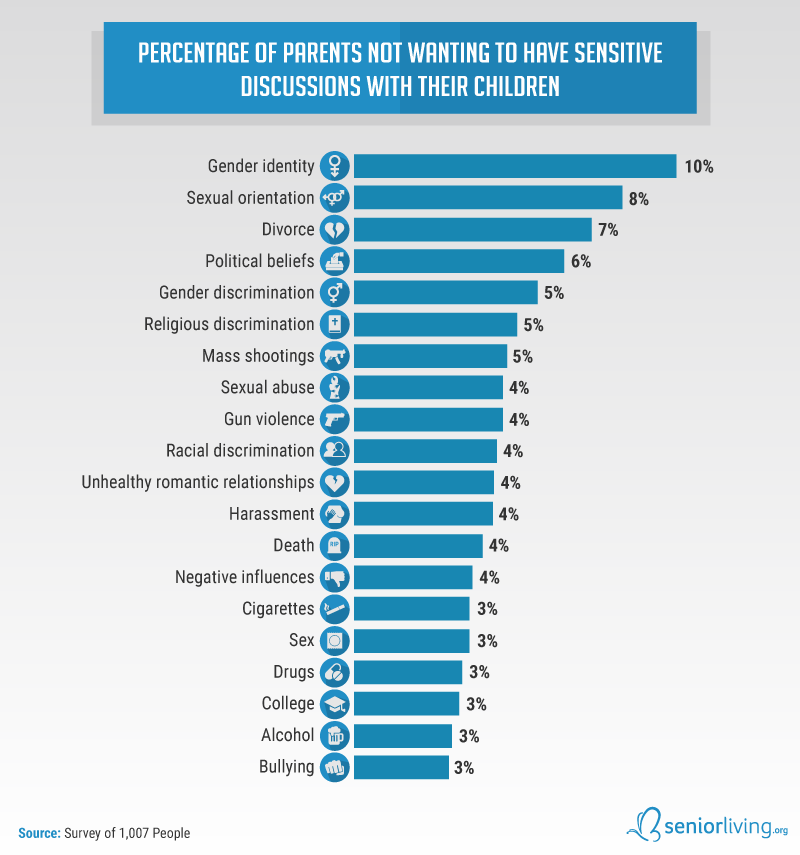 Sometimes, parents may wish to avoid certain conversations altogether. In particular, 10 percent didn't want to discuss gender identity, and 8 percent hoped never to have a talk about sexual orientation with their children. Perhaps some parents, especially straight parents, may find it difficult to broach more LGBT-centric subjects with their children.

Topics least likely to be skipped included bullying, alcohol, and college. These topics may not be the easiest to discuss but are perhaps more universally experienced throughout childhood. 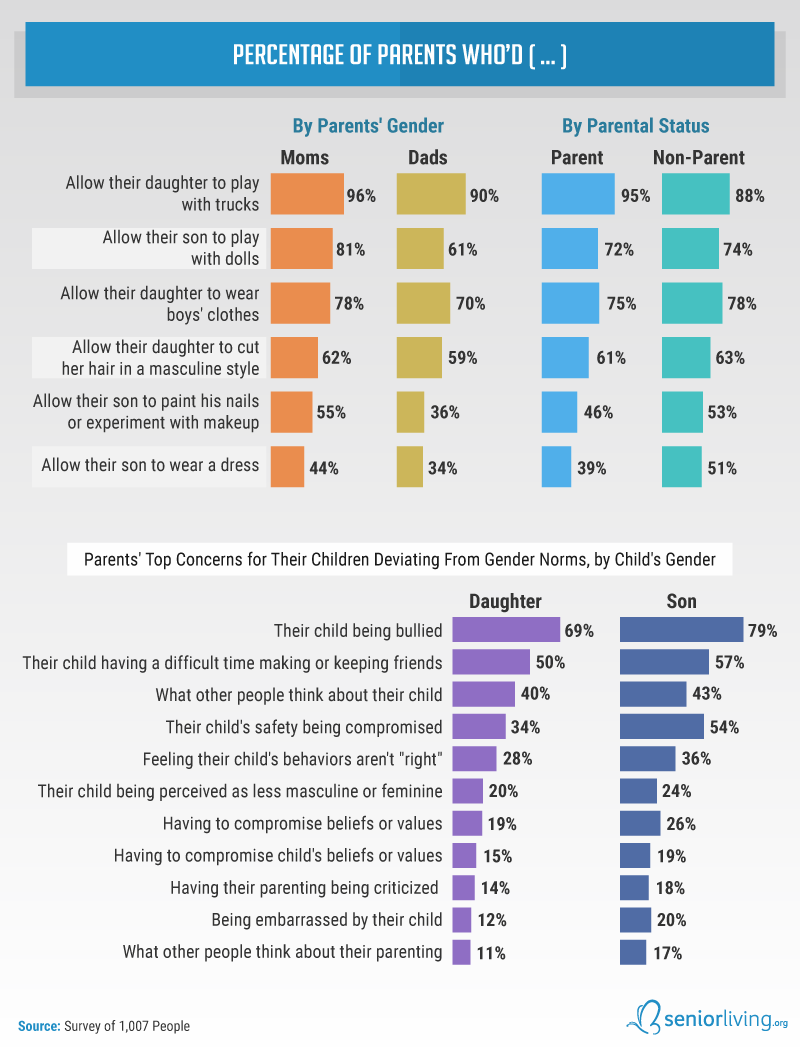 Across the board, women were more willing to let their child defy gender norms than men. While the majority of both genders were OK with allowing their daughters to play with trucks and wear boys' clothes, the most staunch discrepancies surfaced when it came to sons acting feminine.

While 81 percent of mothers were fine with allowing a boy to play with dolls, 61 percent of fathers felt the same, and only 36 percent of dads were OK with their son having painted nails or wearing makeup (compared to 55 percent of women).

Indeed, while young girls are being encouraged more and more to take on traditionally male roles, boys' gender exploration is incredibly stifled in comparison.

The process of raising a child is highly nuanced, and parenting tactics can vary greatly depending on where you are in the world, the era in which you were born, and the way your parents raised you back when you were a kid.

Hanging out with negative influences and bullying – both of which contribute directly to social wellness – proved to be two very important topics for our respondents to discuss with their children. We also found that between moms and dads, and between parents and non-parents, there were more similarities than differences when it came to the most appropriate ages to discuss challenging topics with kids.

Meanwhile, one of the most striking differences had to do with gender identity: Respondents were largely more open to the idea of a girl engaging in gender-bending activities like playing with trucks and much more against the idea of boys playing with makeup or wearing dresses.

Keeping your kids healthy, safe, and feeling good is a huge effort – and just like preparing them for stepping out into the world is an integral part of good parenting, making sure they're secure at home is equally important.

We surveyed 1,007 adults residing in the U.S. Forty-two percent of the participants were men and 58 percent were women. Participants ranged in age from 18 to 86 with a mean of 37 and a standard deviation of 10.

Our survey contained an attention-check question. Any participants who failed to demonstrate that they were paying attention to the survey questions were excluded from the analysis.

We hope you enjoyed reading our content! If you wish to share it with your own audience for any noncommercial use, don't make us tell mom – simply link back to this page to make sure we get credit for producing the story.