Giving Or Taking? An Analysis Of How Seniors Across America Contribute To The Economy

More than 90 million Americans are of an age where they can ask for senior discounts at restaurants, and the American population as a whole is getting older and older: Those 55 and older are the largest age group in the United States today. 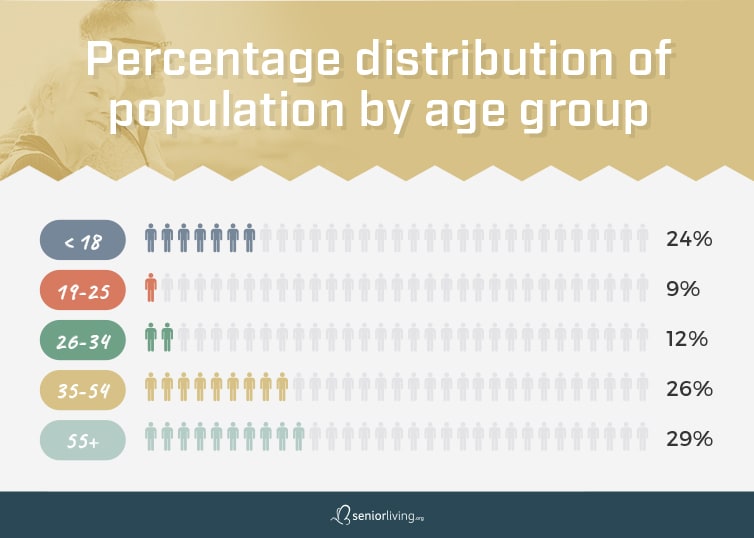 As more Americans reach retirement age, this combination is likely to present a serious economic crisis, as federal and state budgets are stretched to accommodate an increased population drawing public benefits like Social Security and Medicare.

In fact, the Congressional Budget Office recently estimated that by 2029, nearly two-thirds of all non-defense and non-debt federal spending will go to funding Social Security and Medicare. If those projections hold, the spending increase would equate to an 86 percent bump.

But seniors in several states are bucking that trend. Our analysis of Census data on income, healthcare and poverty finds that in about half the states, seniors are contributing at least as much to the economy as they take.

To determine which states’ economies are boosted by their senior populations, we examined three broad aspects of the most recent data from the U.S. Census Bureau using the Bureau’s excellent American FactFinder tool’s advanced search function:

That left us with two largely positive markers and two largely negative markers, which we compared to each other to determine the net benefit of seniors on the economy. For example, the worst performing state in our analysis was West Virginia, where 22 percent of seniors are still working and 24 percent earn incomes higher than $60,000, while 11 percent receive food assistance and 63 percent are on Medicare. Because there’s likely to be overlap in those groups, we averaged the two measures on either side and then did a simple subtraction of the average negative from the average positive. So for West Virginia that’s 23-37, for a net negative of -14%.

Read on to find out how each state scored in the individual areas we studied. 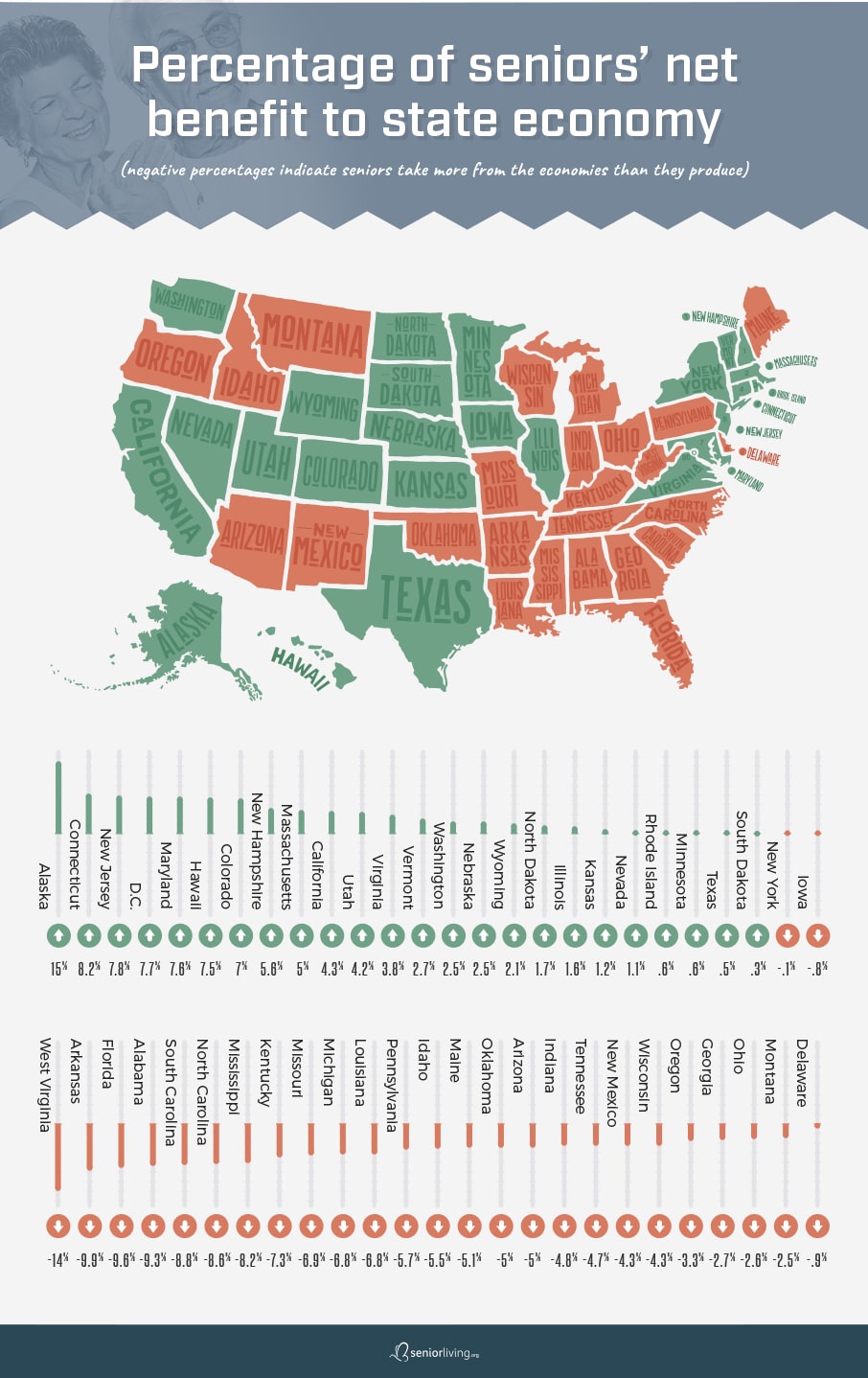 Alaska’s seniors are by far the highest benefit producers in the nation, with a net benefit of 15 percent, nearly twice the second-place state, Connecticut.

Twenty-three states and the District of Columbia see a net economic benefit from their senior citizens, while New York is just barely in the red at -0.1 percent. Here are a few more tidbits about the results: 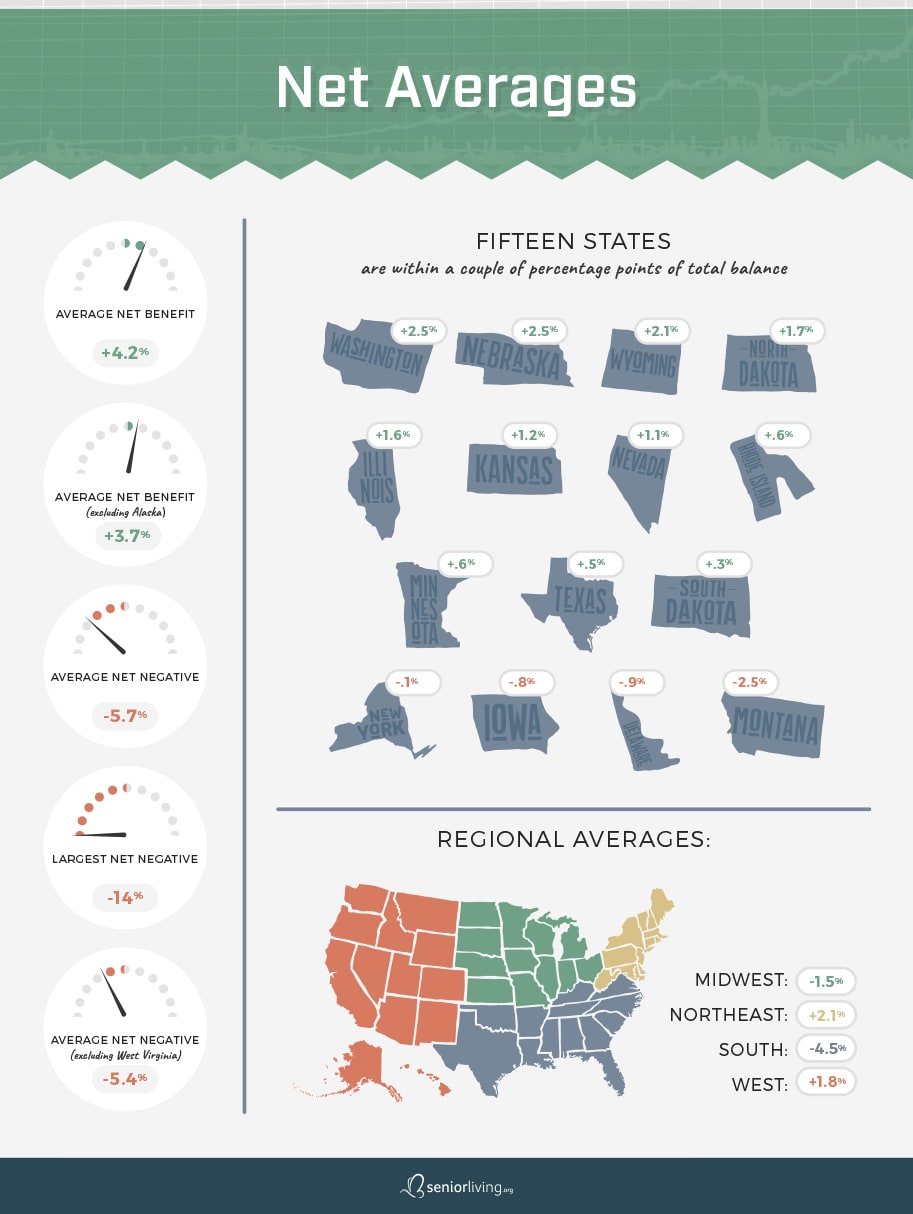 Nationally, just over 28 percent of individuals 60 and older are still in the workforce. That’s about a 12 percent increase from the level measured in 2009, though it still means that nearly three-quarters of those in the age group are no longer working. 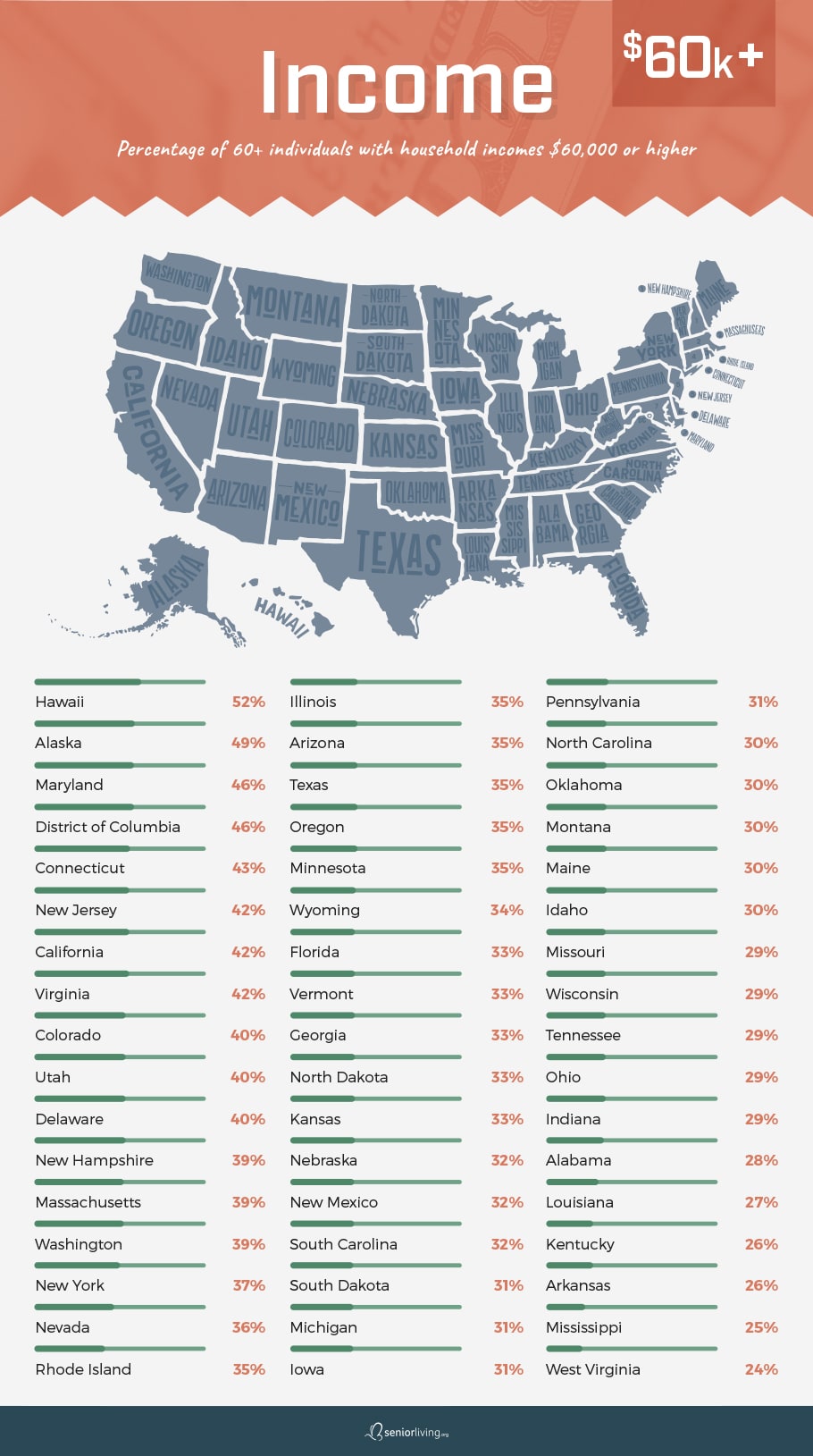 Regionally, the income numbers are quite variable, though it’s interesting to note that nine of the bottom 10 states are east of the Mississippi River. 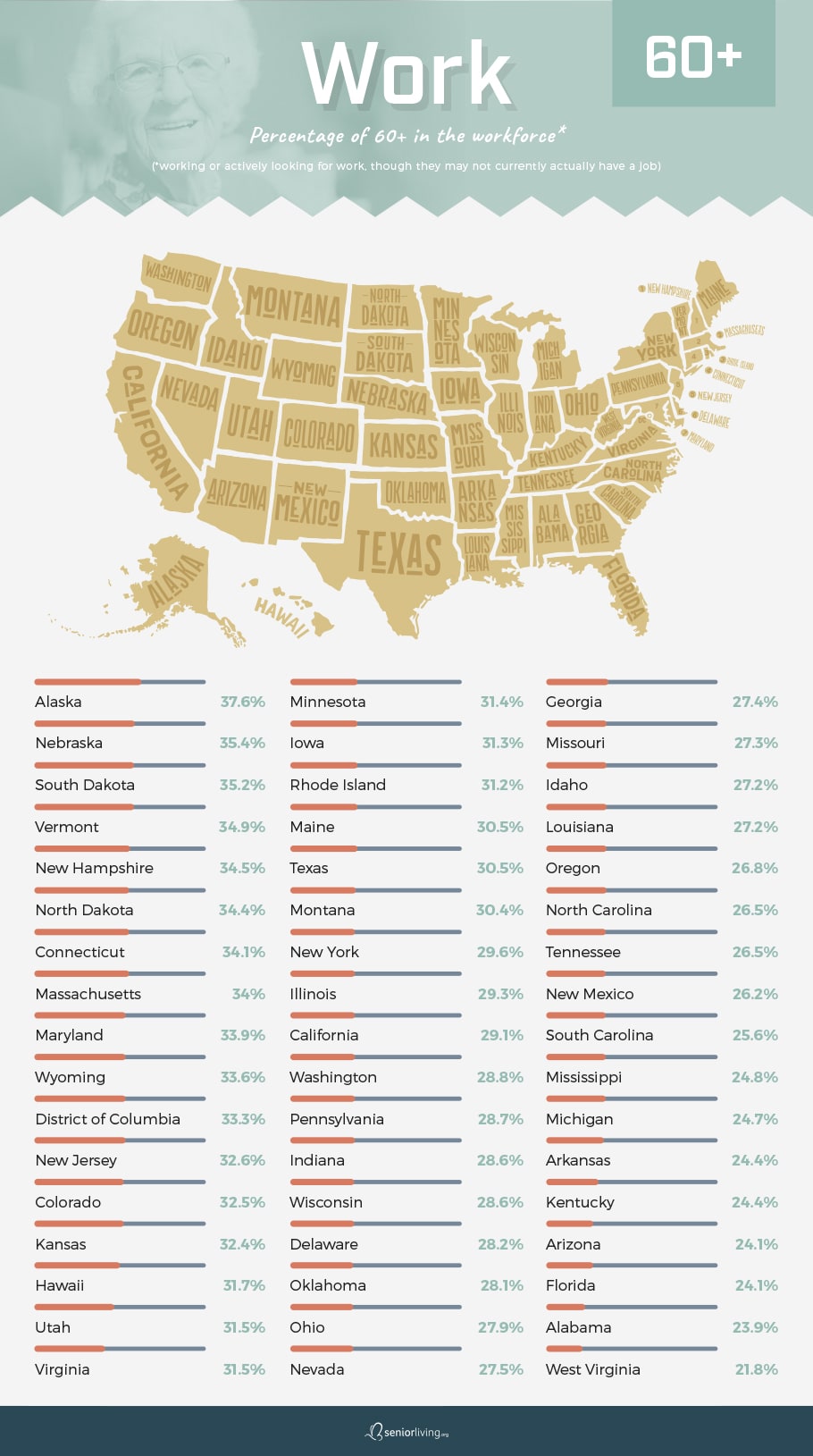 Noteworthy on this list — the two states generally considered retirement havens, Florida and Arizona, are tied with just about 24 percent of their 60-and-older residents still working. Go figure. 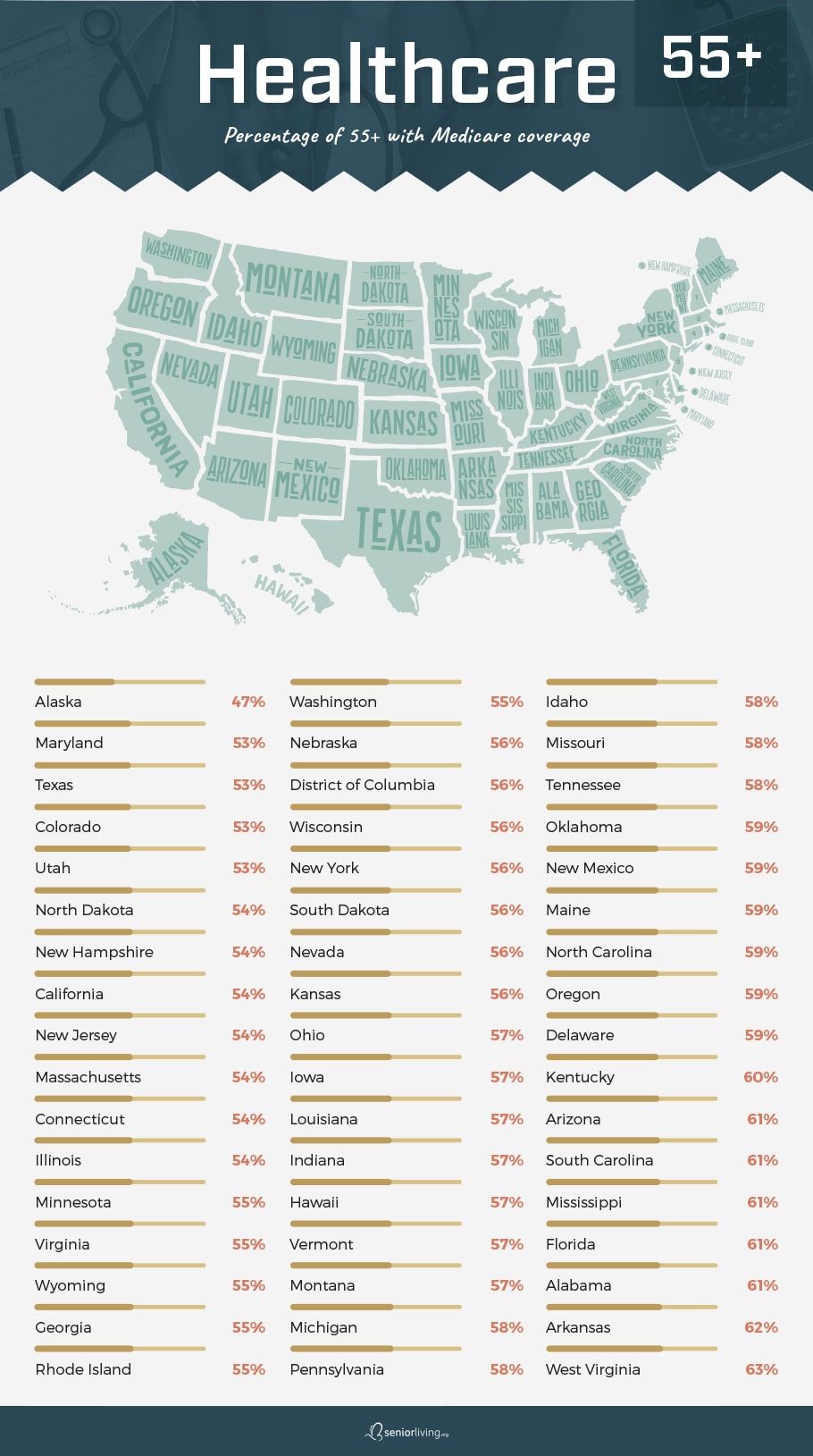 Alaska is the only state in which less than a majority of those 55 and older are Medicare recipients. Sixteen states and the District of Columbia are within 1 or 2 percentage points of the national number, but 14 states have numbers 5 percentage points or higher. 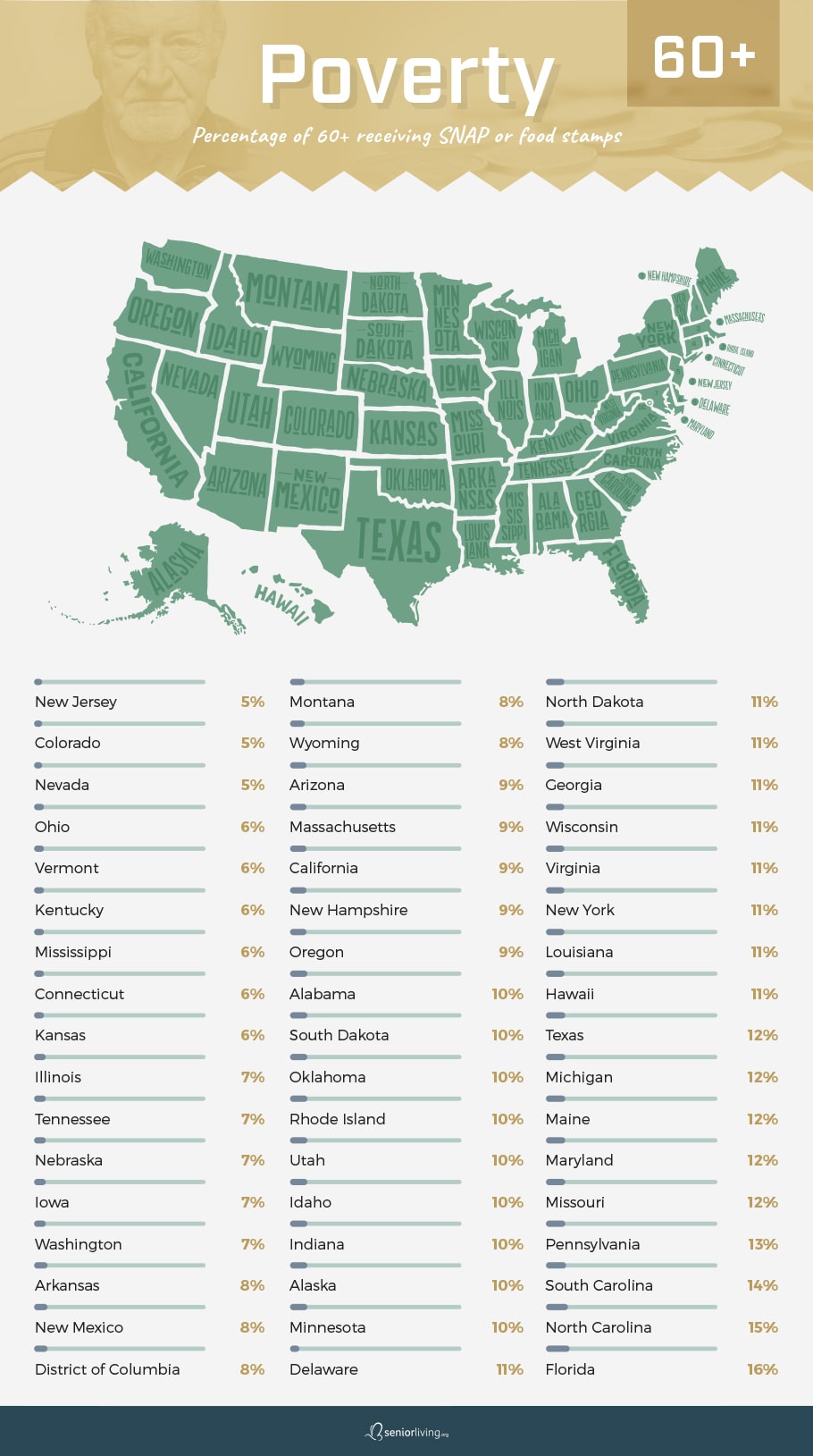 More than half of the states posted double-digit numbers in this area, and six others were at or near 5 percent.

Why This All Matters

Everyone agrees that individuals who have worked hard their whole lives and helped contribute to society over the decades should not have to toil long into their golden years. But with population increases and economic uncertainty, that’s seeming less and less likely.

For those born after 1960, the earliest they can retire and collect full Social Security benefits is age 67, and with Social Security such a popular topic for political debate, it seems all but assured that the retirement goalposts will keep moving for those even younger.

We linked to a few Census pages throughout this article, but we highly recommend you visit the American FactFinder tool and go digging on your own.

Other resources included the Kaiser Family Foundation, which helpfully aggregates Census data in addition to doing its own research, and the Congressional Budget Office, a nonpartisan agency that analyzes budgetary and economic policies and issues.

The material on this page is free to share for noncommercial use. When using the text or images from this page, all we ask is that you properly attribute it with a link back to the URL of this page.