Which States are the Most Dangerous for Seniors?

Violence in American society garners no shortage of media attention. From entire months devoted to raising awareness of domestic abuse to advocacy against gun violence or cyberbullying, it seems like for every segment of the population that experiences specific threats or acts of violence, there’s a corresponding push to understand and reduce that violence.

That’s one reason why a recent report by the federal Centers for Disease Control and Prevention is so shocking. In April, the CDC reported that the rates of homicides and assaults committed against older Americans has surged in recent years.

The rate of older Americans suffering non-fatal assaults rose by about 55% between 2002 and 2016, according to the CDC, which attributed the rise in rates partially to the increased numbers in the age group overall, as the U.S. population continues to get older on average. About 22% of Americans today are older than 60, but that proportion is expected to grow to about 28% by 2050. But even today, the proportion of older people in the population is larger than the proportion of children under 15 (19%).

Older Americans do have a lower rate of violent victimization than the overall U.S. population, but those 60 and over are at risk of particular type of violence that doesn’t affect younger people — elder abuse. It’s estimated that about 10% of those over 60 experience elder abuse every year, but the majority of elder abuse incidents go unreported.

While the CDC report revealed startling trends in violence against older Americans, the homicide rate of those 65 and older has fallen slightly in the past few years, though when looking at state-level data, there’s little cause for celebration.

In which states are older Americans most likely to be the victims of homicide, what does elder abuse look like and how can you protect yourself or a loved one?

Most & Least Deadly States for Seniors

National-level data, such as the rise in the national violence rate noted by the CDC, is definitely important to understanding the state of violence against older Americans, but this is a huge and diverse country. What’s true in one state isn’t always true in another, so we wanted to explore which states pose the greatest risk of violence for older Americans.

The CDC’s WISQARS (Web-Based Injury Statistics Query and Reporting System) tool reports data related to both fatal and nonfatal injuries across the country. For nonfatal injuries, the figures are not split out by state, but they are for fatal injuries, which can include homicide, suicide and police intervention.

While older Americans are much less likely overall than their younger counterparts to become homicide victims and the trends are going in a positive direction, some states paint a far darker picture for those over 65. 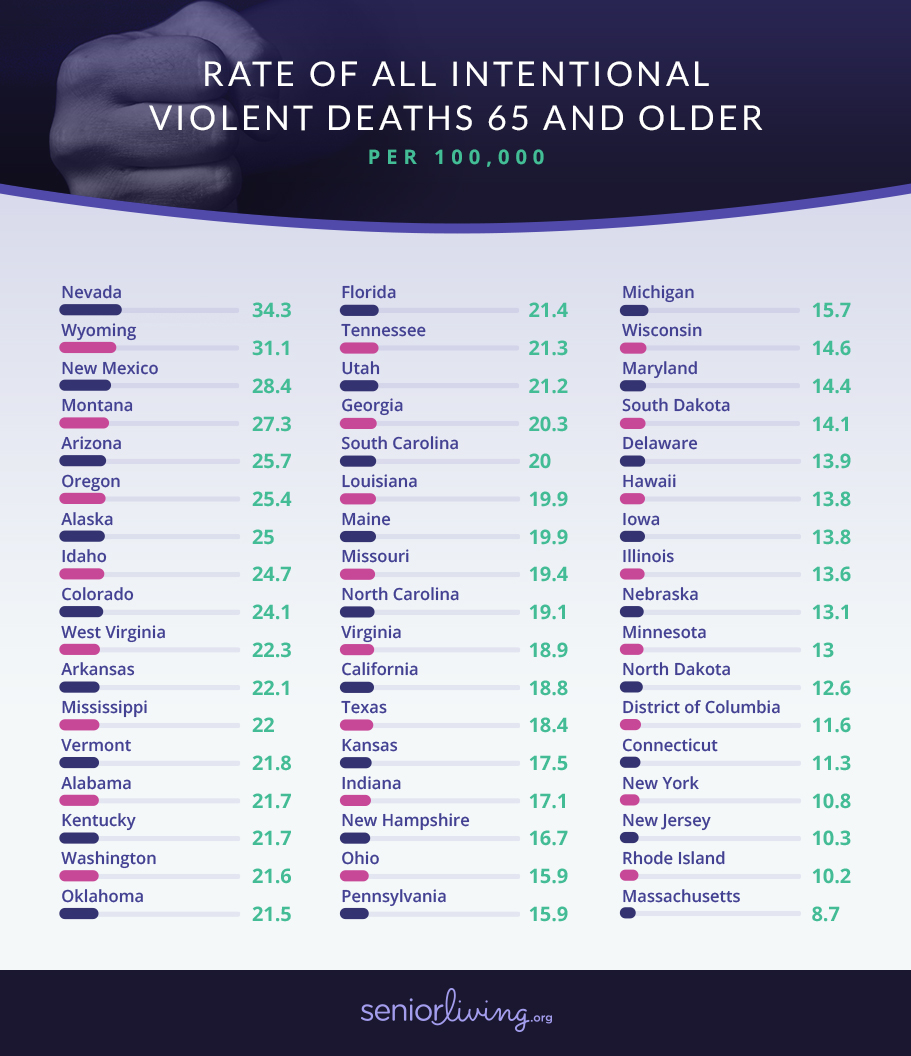 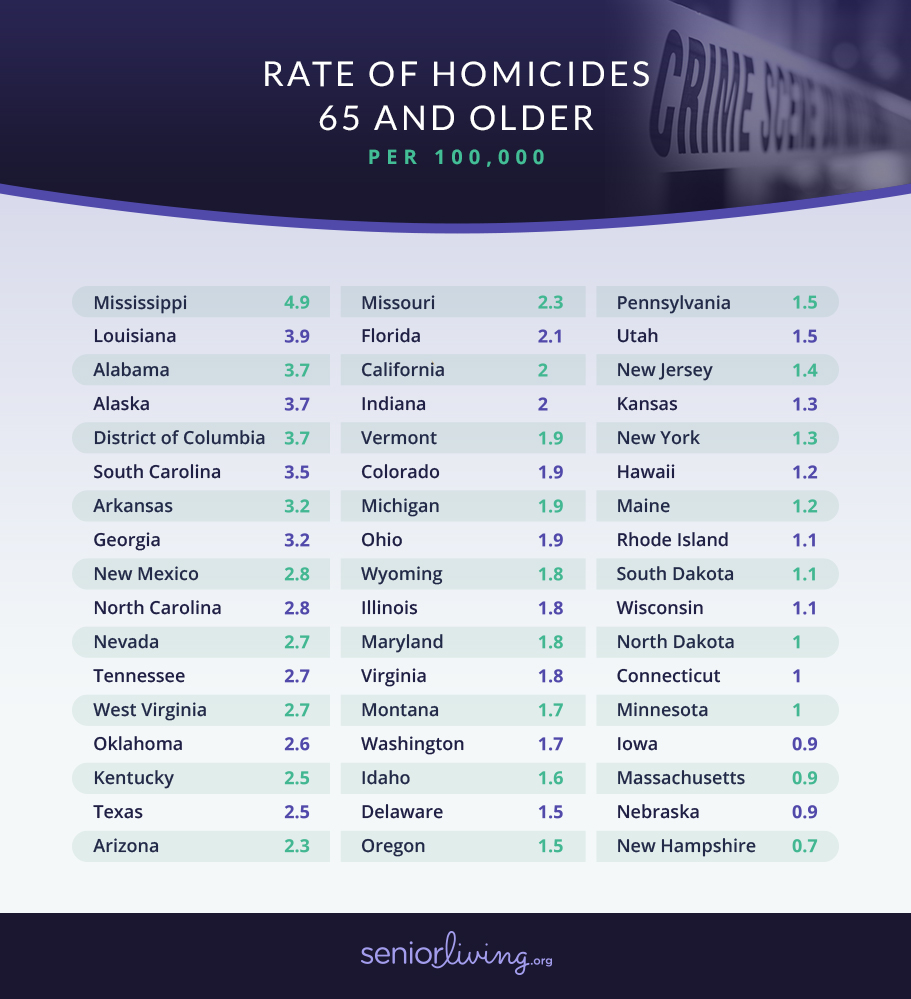 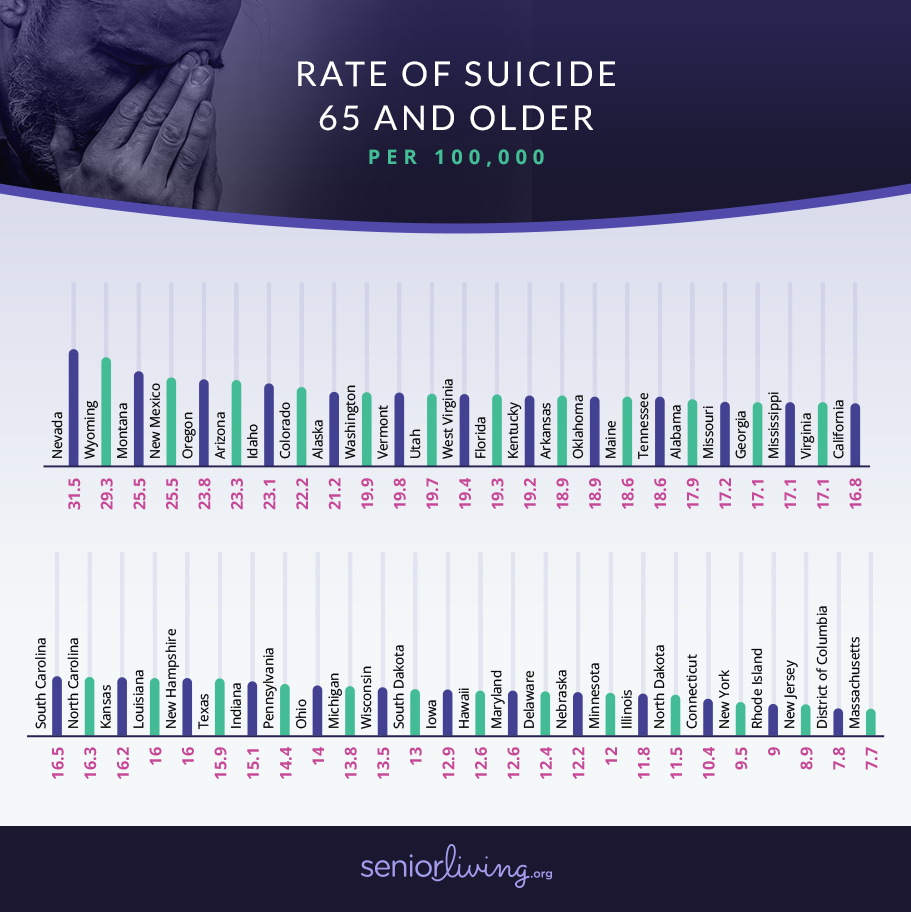 For the oldest Americans, suicide is much more common than either homicide or police action. Suicides account for more than 88% of the violent deaths of Americans 65 and older, but in which states do homicides, such as murder or manslaughter, account for the highest percentage of overall violent deaths of older Americans? 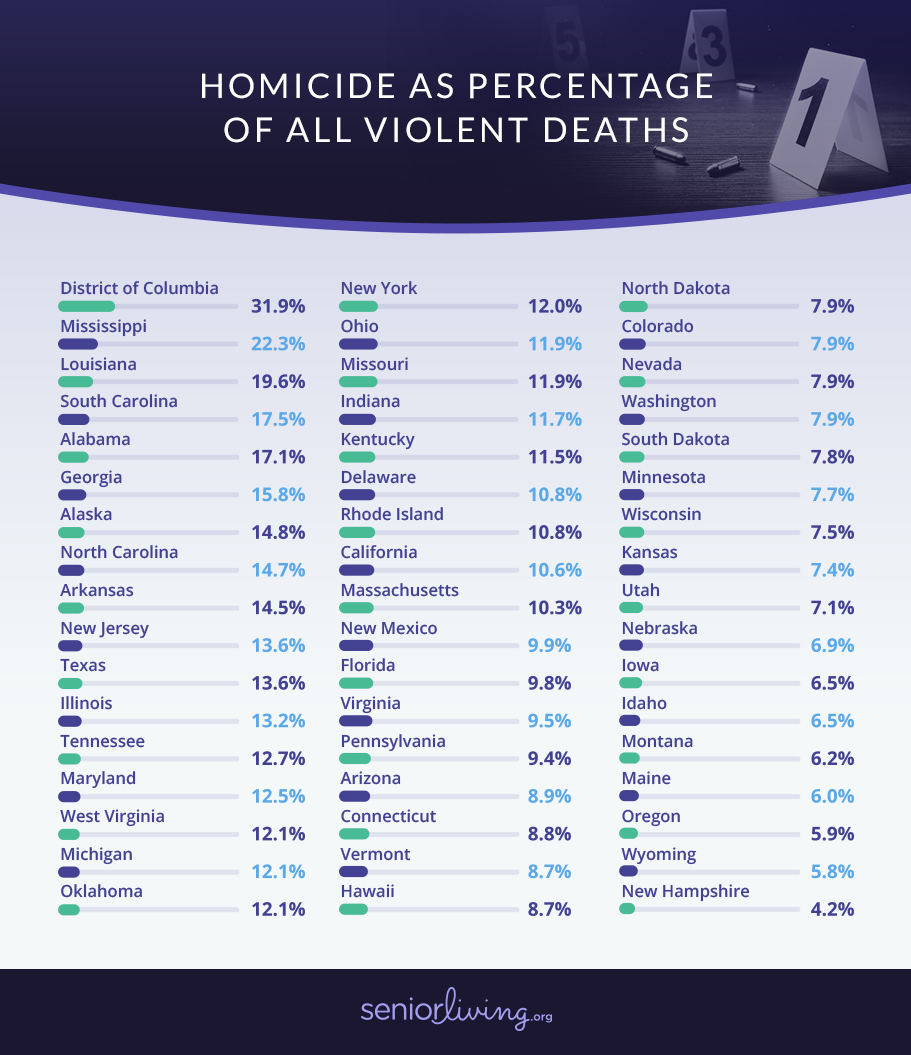 Perhaps it’s not surprising, but major differences also exist when the data is broken down along racial lines. For instance, older African-Americans are far more likely to be homicide victims, while older white Americans are more frequently suicide victims. 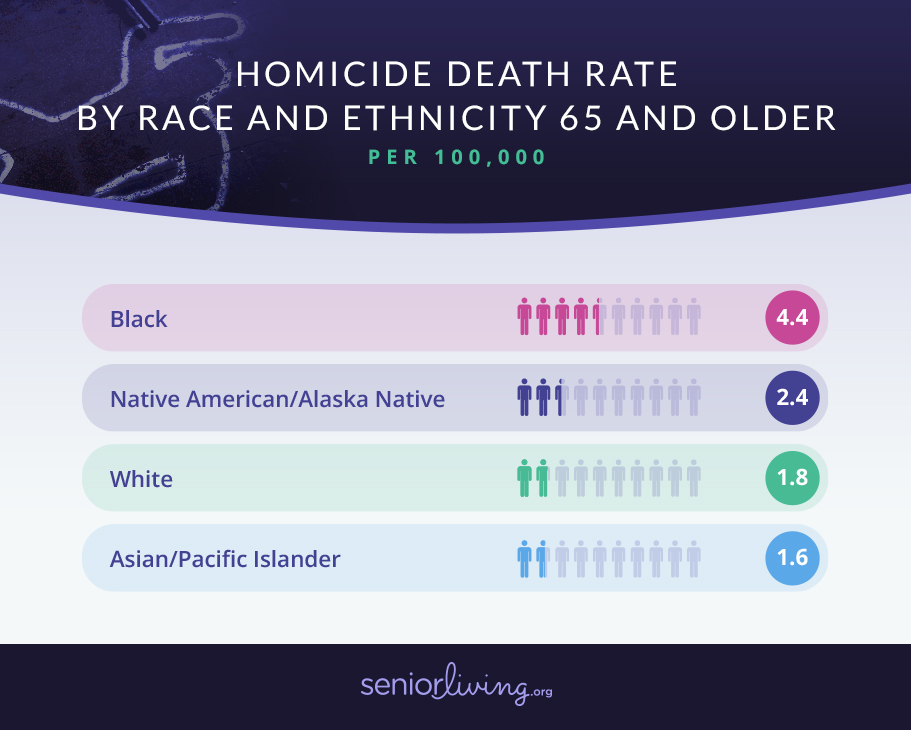 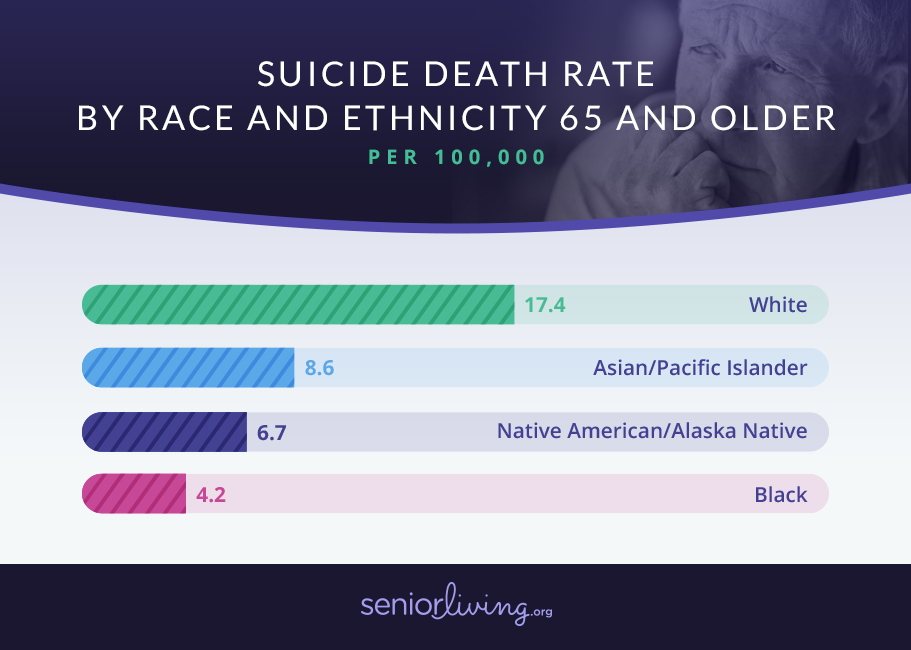 Other Violence Against Older Americans

Though the trends are moving in the wrong direction, older Americans still are statistically less likely to be the victims of violence than their younger counterparts. For instance, the total rate of violent victimization among those 12 and older is 18.6 per 1,000 people, while for those 65 and older, the rate is just 5.2 per 1,000 people.

However, older women are much more likely to experience violence than older men to the tune of about double the rate. 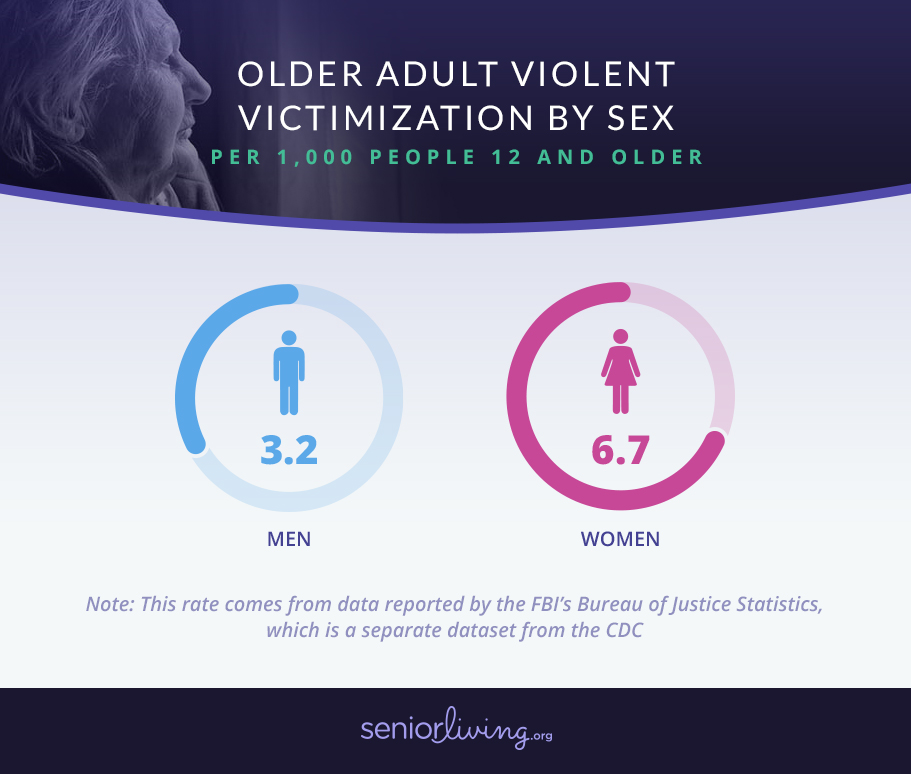 Let’s explore other characteristics of nonfatal violence against older Americans. Using the CDC’s WISQARS tool, we can split violence data in a great many ways, including looking at the age of the victim, what caused the injury and whether the incident was intentional.

Among those 65 and older suffering nonfatal injury between 2007 and 2017, about two-thirds were the result of assault. 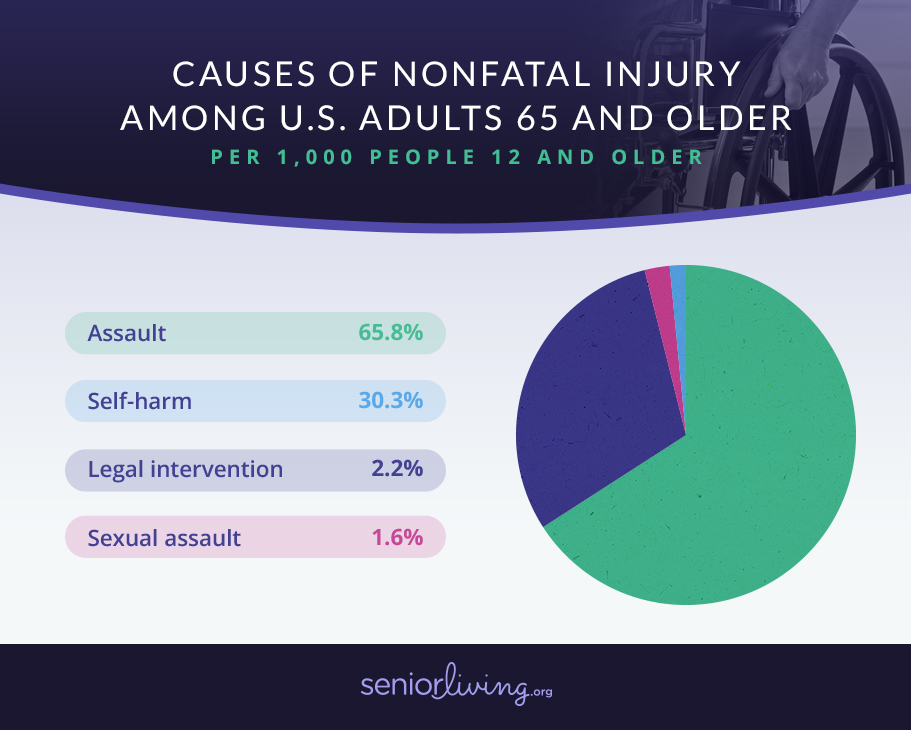 Among all other Americans, nonfatal self-harm injuries are much less common (20.7%), and while police incidents account for a still-small proportion of nonfatal injuries, legal intervention is much more common for those under 65 (3.9% vs. 2.2%).

Most nonfatal assaults of older Americans involved hitting or punching, but nearly 1 in 5 were poisonings. 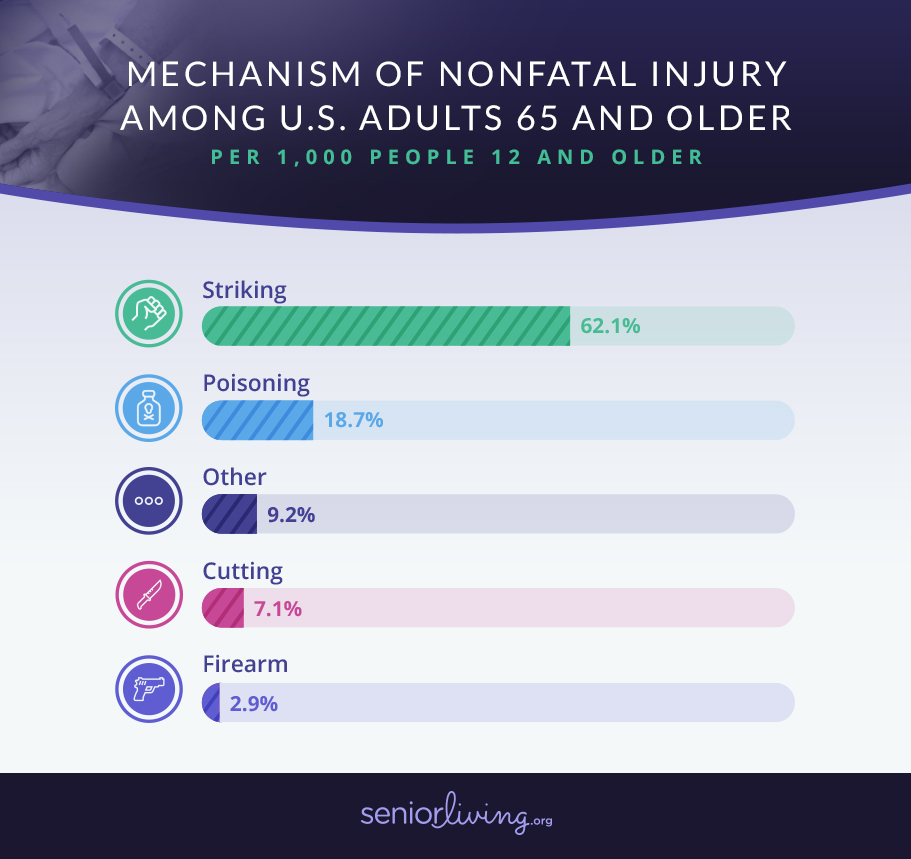 Poisoning-related injuries are much less common for Americans under 65, though that still accounts for more than 1 in 10 injuries. Among those under 65, 11.2% of nonfatal injuries were caused by poisoning.

Among older Americans, those who are the youngest in the age group have by far the highest rate of nonfatal violent injuries. 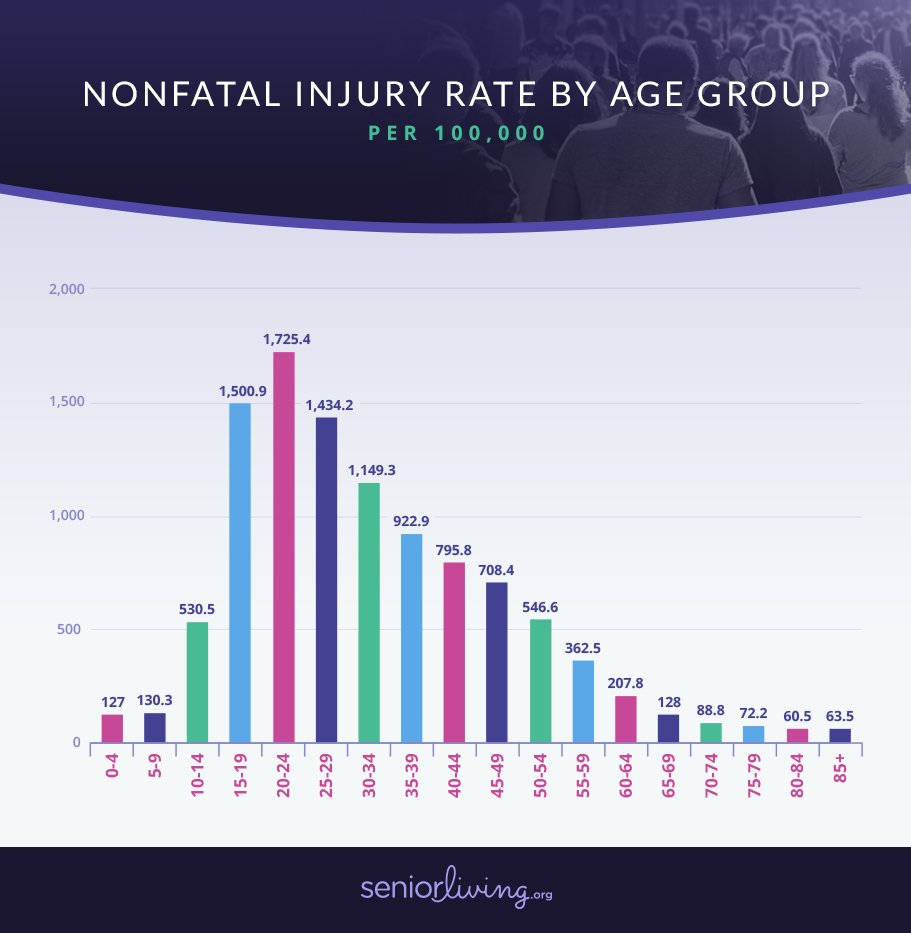 Violent injuries to Americans between 65 and 69 about as common as for those under age 4, but those between 15 and 24 are by far the most likely to be the victim of such incidents.

Elder Abuse: How to Spot It & Stop It

Elder abuse includes physical abuse or assault, emotional abuse, neglect, exploitation, sexual abuse or assault and abandonment. While perpetrators can include strangers, older Americans often are victimized by people they know, including children, spouses and other caregivers.

While CDC statistics show us elder abuse is on the rise in the United States, the truth is that the majority of elder abuse incidents are never reported to police. In fact, only 45% of cases are reported to authorities.

How can you spot elder abuse? The National Council on Aging says the warning signs of elder abuse include: 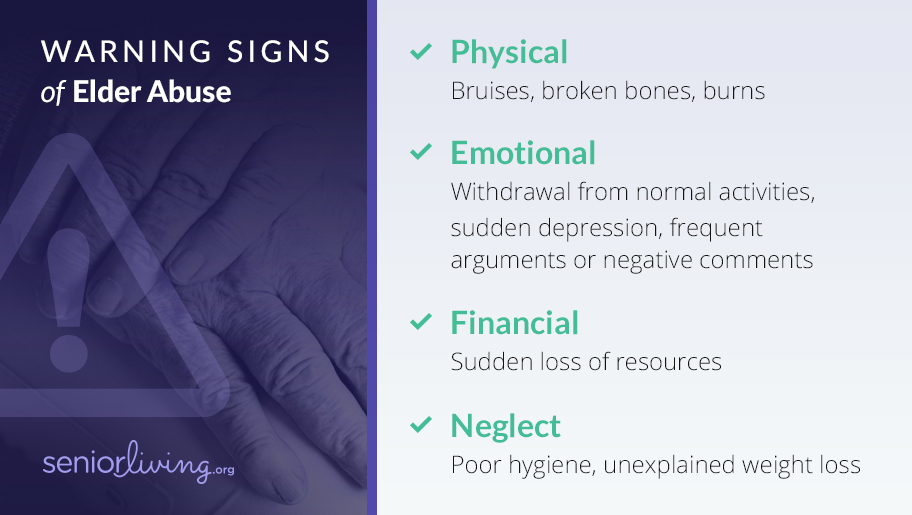 If you suspect elder abuse, what should you do? In most states, laws specifically prohibit elder abuse and statutes outline specific penalties for those who break such laws. So you should your local police and/or adult protective services.

As we age, many parts of our lives begin to undergo major changes. We stop working. For those of us who are lucky, the stresses of everyday life become less significant. But with national data trending in the wrong direction, it’s clear far too many older Americans are stuck in situations that are dangerous and potentially deadly.

Where possible, we’ve linked to the original sources throughout this story. However, several charts and maps are based on data contained within the CDC’s WISQARS tool, which covers fatal and nonfatal injury information spanning nearly two decades. We used the data filtering tools on the site to determine the state-level violent death and national violent injury rates. Because the data is sometimes spotty, particularly when looking at the state level, our data covers 2007-2017.

Feel free to share the material on this page for noncommercial purposes. When using any text or images from this page, please properly attribute the material and include a link back to the URL of this page.