“The economy, stupid” — a rallying cry for the staff of Bill Clinton’s 1992 presidential campaign, often misquoted as “It’s the economy, stupid,” this phrase remains one of the most popular maxims in modern American politics.

Economic health is considered a central issue in any presidential election, and 2020 looks to be no different. While it’s not entirely clear to political scientists exactly how voters judge the health of the economy, there’s no doubt that for many people, the perceived state of the economy will be one of the biggest influences on their vote. In fact, for about 1 in 3 American adults, the economy will be the main driver of their voting decisions in 2020.

Today, more Americans view the national economy as being in excellent shape (18%) than in poor shape (12%), but as with many other political issues, most of us are in the middle with 37% rating the economy as good and another 30% saying it’s only fair. Still, the percentage of people who say the economy as excellent more than doubled from the start of 2018 to the end of 2019.

But the truth is that the nation’s economy, healthy or not, is really a collection of a bunch of smaller economies, and as the states go, so goes the nation. So which states have the most robust economies — and which ones need to make the most progress?

To understand the relative health of the individual economies of the 50 states and the District of Columbia, we’ll examine data from the U.S. Bureau of Labor Statistics and the Bureau of Economic Analysis covering topics like unemployment, average wages and gross domestic product.

You can jump to the bottom of the page to see our full methodology, but here’s a quick summation: We ranked the states from best to worst in a total of nine categories, and those rankings were added together to create a total ranking in which higher numbers equate to a healthier economy.

According to our formula, the state with the healthiest economy is Massachusetts, followed closely by Colorado. Just six points separate No. 1 Massachusetts and No. 2 Colorado. California, New Jersey and Virginia make up the remainder of the top five, giving the West and Northeast each two states in the top five.

The state with the worst economy, according to our analysis, is Mississippi, with a total score that’s less than one-ninth the score for Massachusetts. 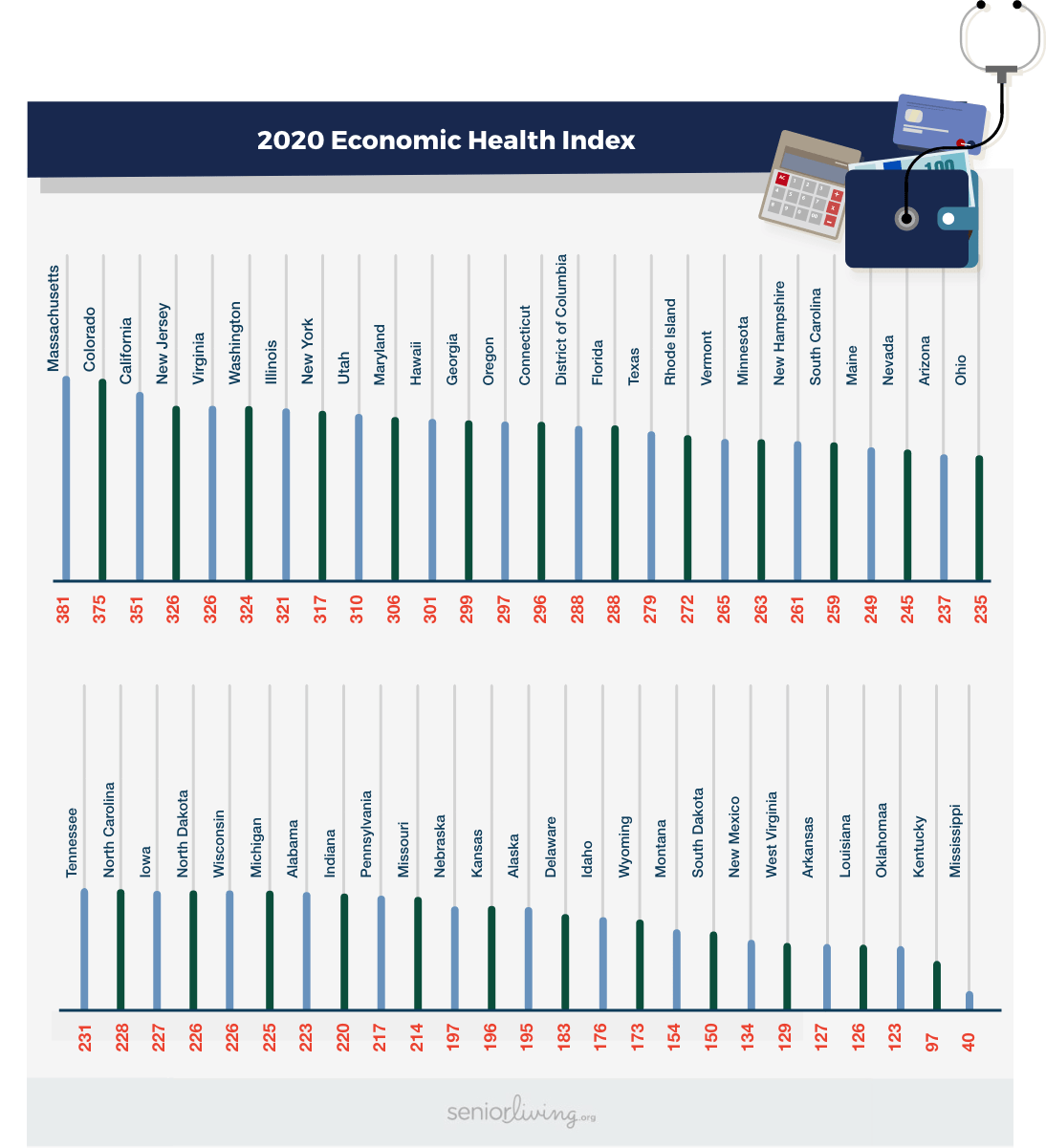 In addition to being home to the No. 1-ranked state, Massachusetts, the Northeastern U.S. has the highest average score of any of the four major regions of the country. 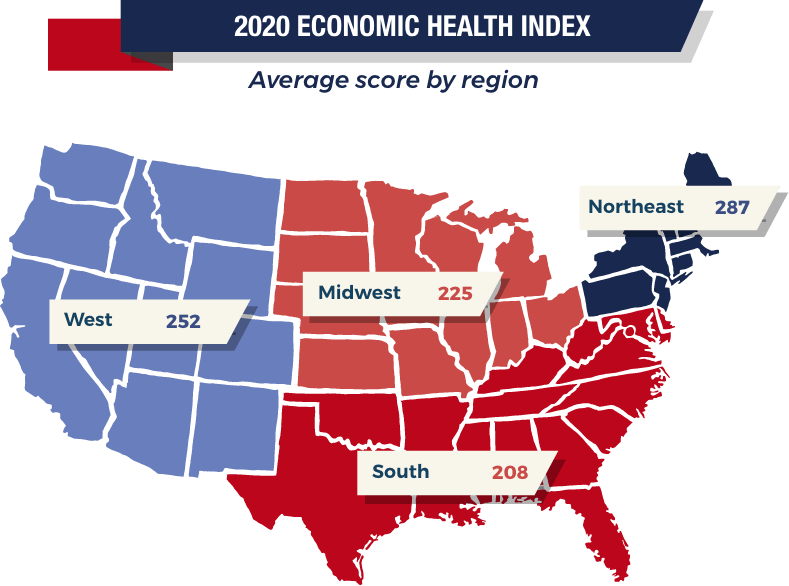 The Midwest and South have by far the lowest average scores of the four regions, and six of the bottom 10 states are in the South. However, both regions have at least one state in the top 10, and the South is home to the overall No. 5 state, Virginia.

Few issues impact the average person more than the availability of jobs where they live. Nationally, since the dark days of the Great Recession, unemployment dropped by nearly two-thirds between November 2009 and November 2019, falling from near-double digits (9.9%) to just 3.5%. More than half the states have rates even lower, though a few have considerably higher jobless rates. 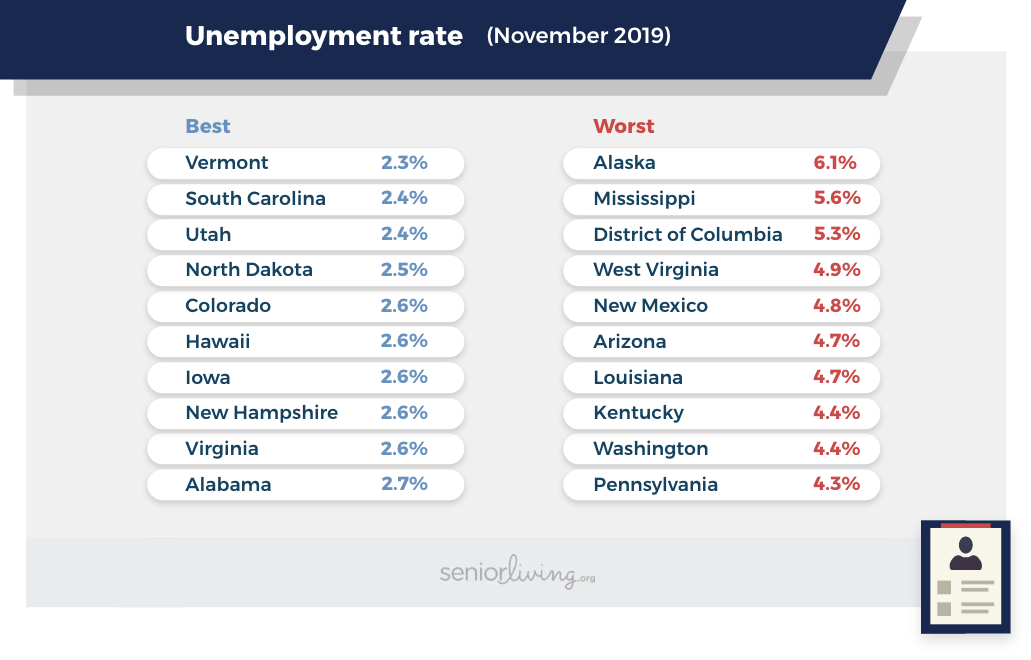 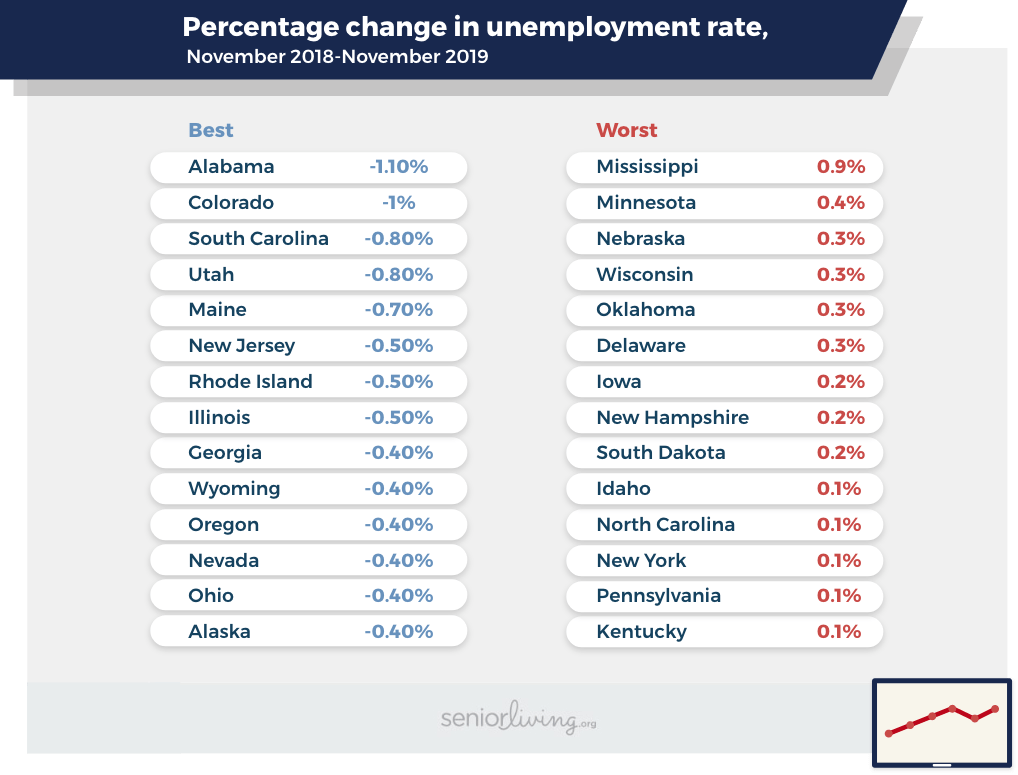 When taking an even longer view of joblessness data, only two states have failed to see their rates decline over the past five years. South Dakota’s rate is unchanged from the 2015 annual average, while Nebraska’s unemployment rate has increased by 3.3% in that time. 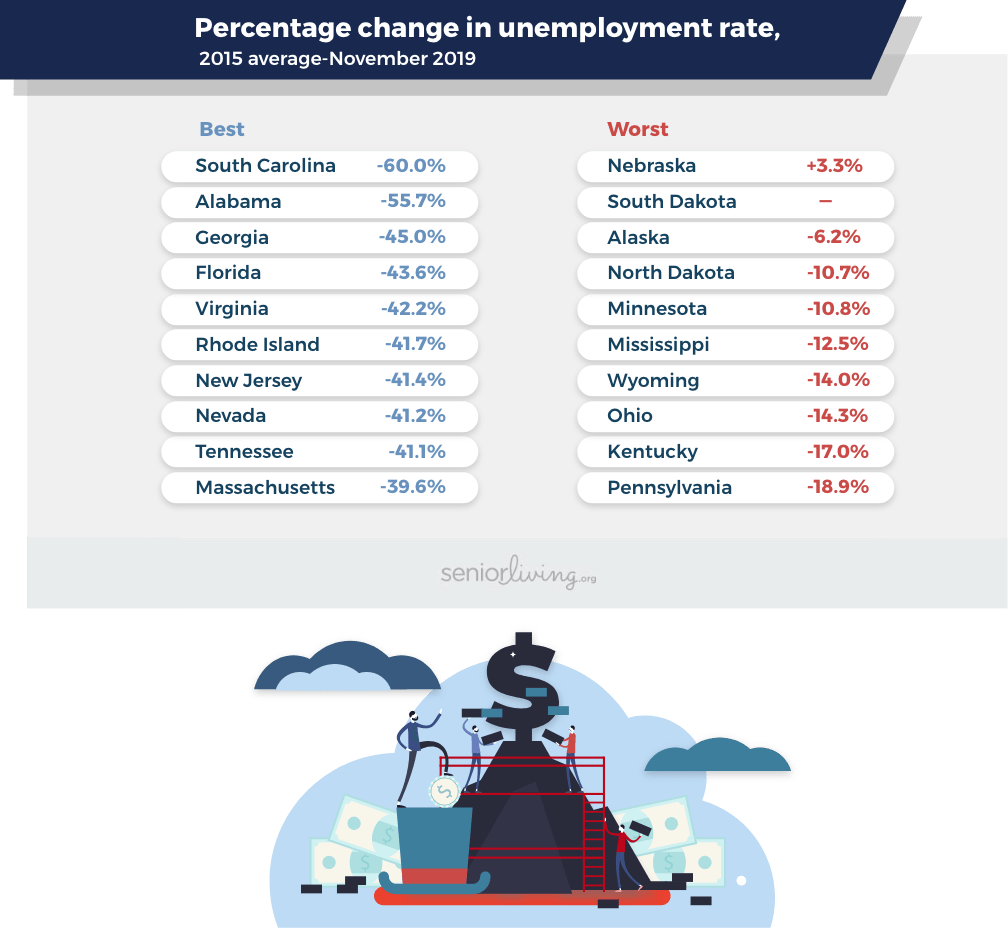 Getting a job is only half the battle; getting a good job with a healthy hourly wage or annual salary is the real challenge. The average American worker today earns an average hourly wage of $24.98, which translates to an annual average of $51,960. In most states, though, annual wages aren’t as high as that, owing largely to a very high typical salary figure in Washington, D.C. In fact, if we omit the district from the analysis, the average annual wage reflects the overall health index ranking for the best state and the worst state — Massachusetts and Mississippi. 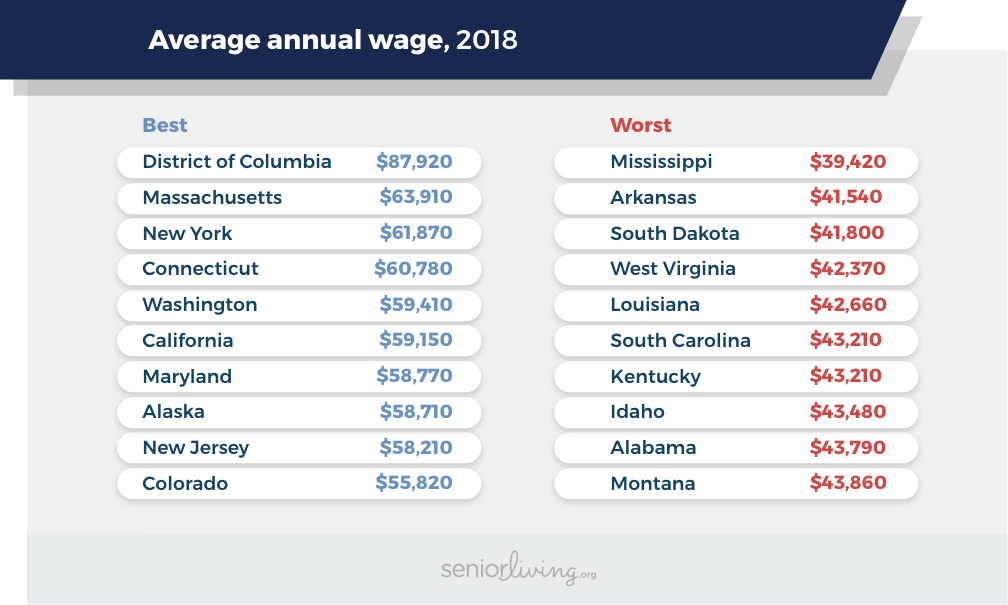 Average salary figures include all wage workers, meaning those who just started out their careers as well as those with long-established or lucrative careers. Our analysis also included the 90th percentile wage in each state, or the wage earned by the top 10% of workers. A total of 14 states have 90th percentile wages in the six figures. 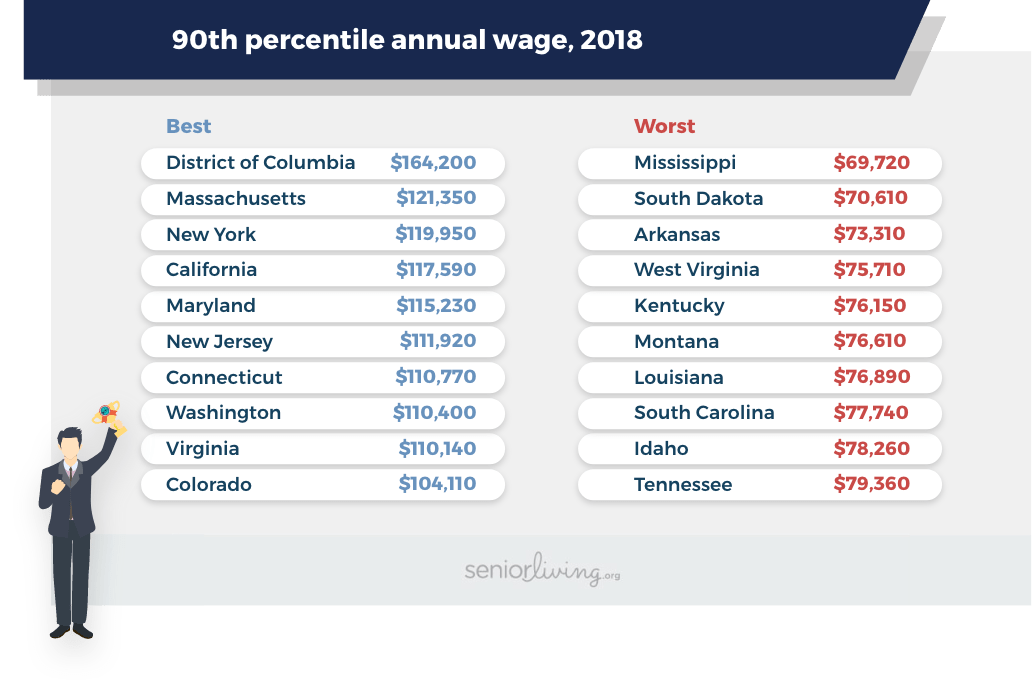 In every state, the average annual wage has risen over the past five years, with an average increase of 10% between 2014 and 2018. Still, some states have seen far higher wage increases for the average worker. 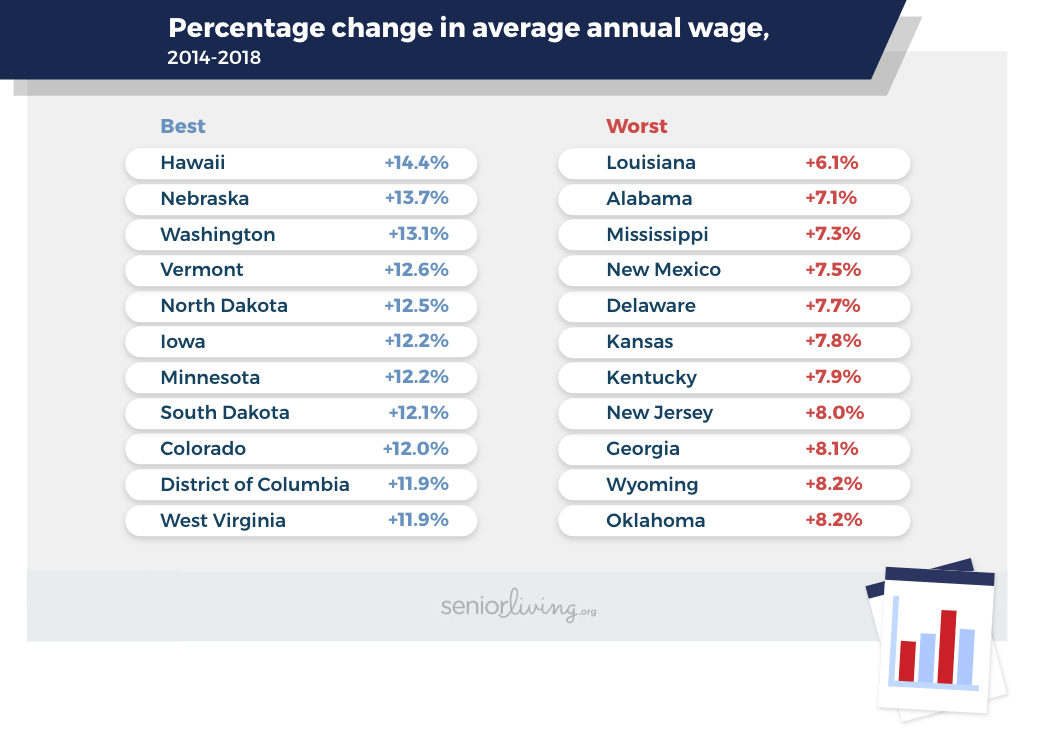 Another way of understanding the health of a state’s economy is to measure its total production, or gross domestic product, which is a calculation of the total value of all goods and services the state produced. In 2018, the U.S. economy produced a total GDP of nearly $21 trillion, an increase of more than 5% from 2017. The states mostly have seen GDP rise in recent years, though there are some exceptions. 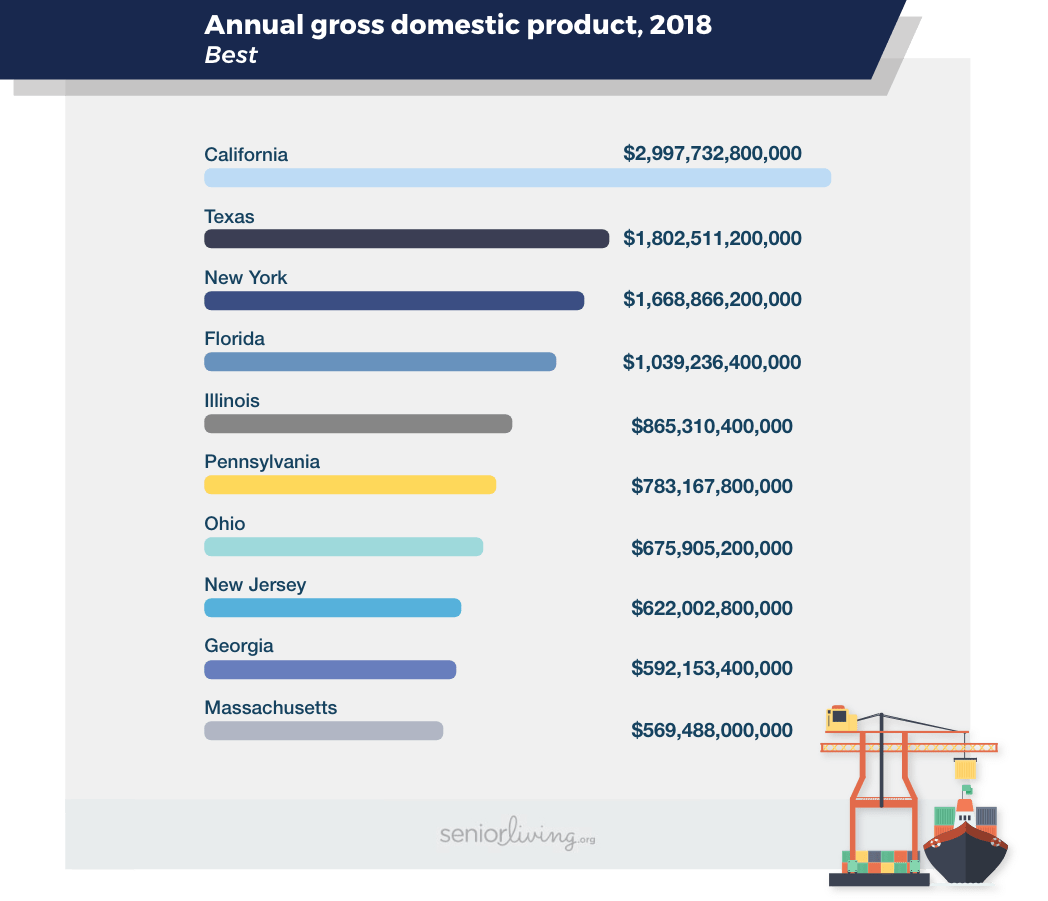 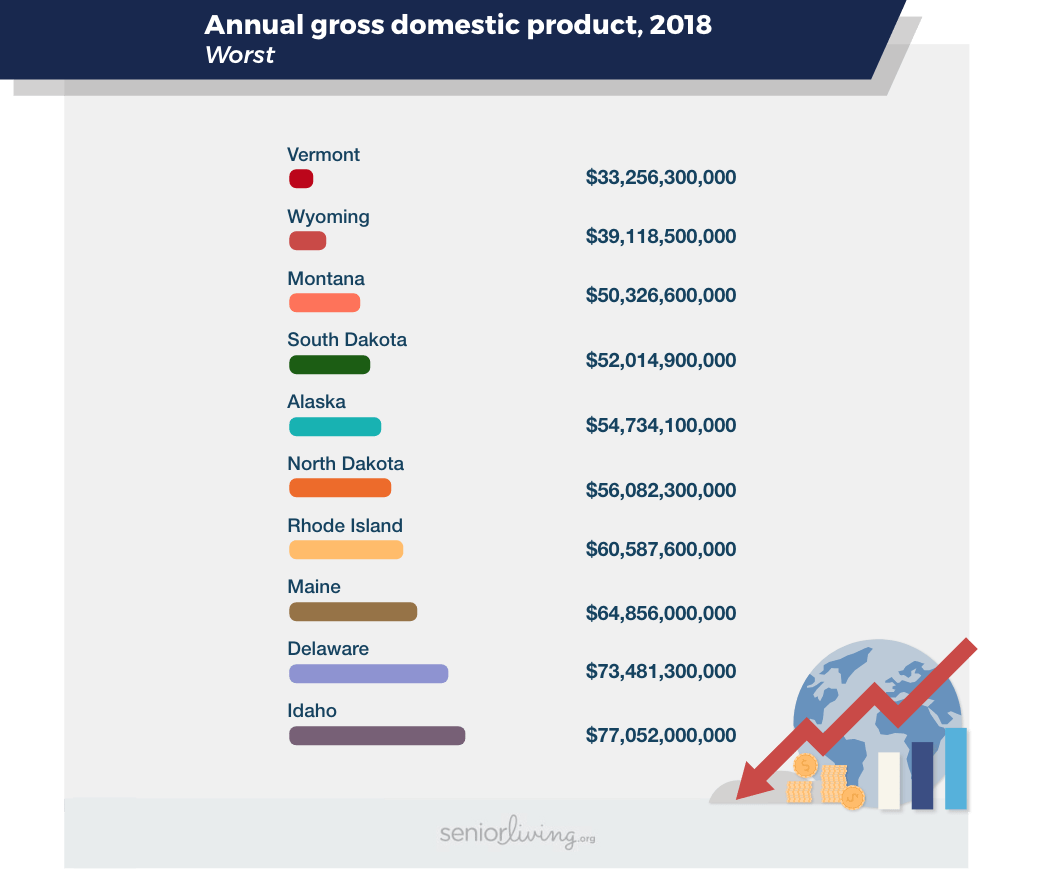 Over the most recent five-year period for which data is available, 2014-2018, the American economy, as measured by GDP, grew by more than 17%, and the bulk of the states have similarly seen GDP rise. In fact, all but three states have posted increases to GDP in that time. 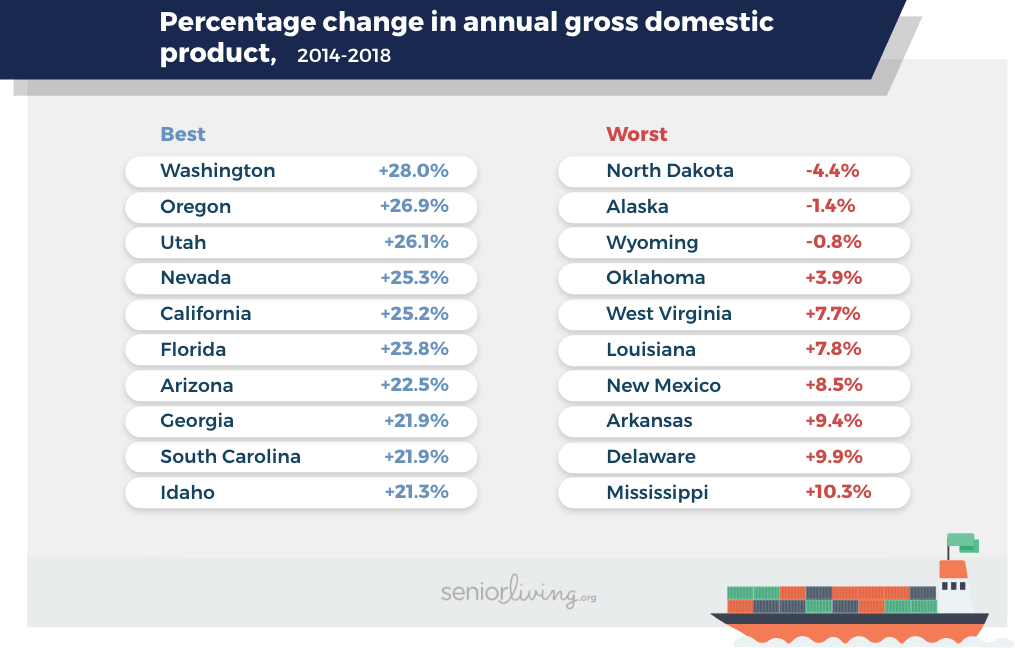 Generally, the larger a state, the higher that state’s GDP will be since the metric measures economic production and larger states have more workers. So how do they stack up after adjusting for population? As expected, there’s a huge range of variation in this measure. 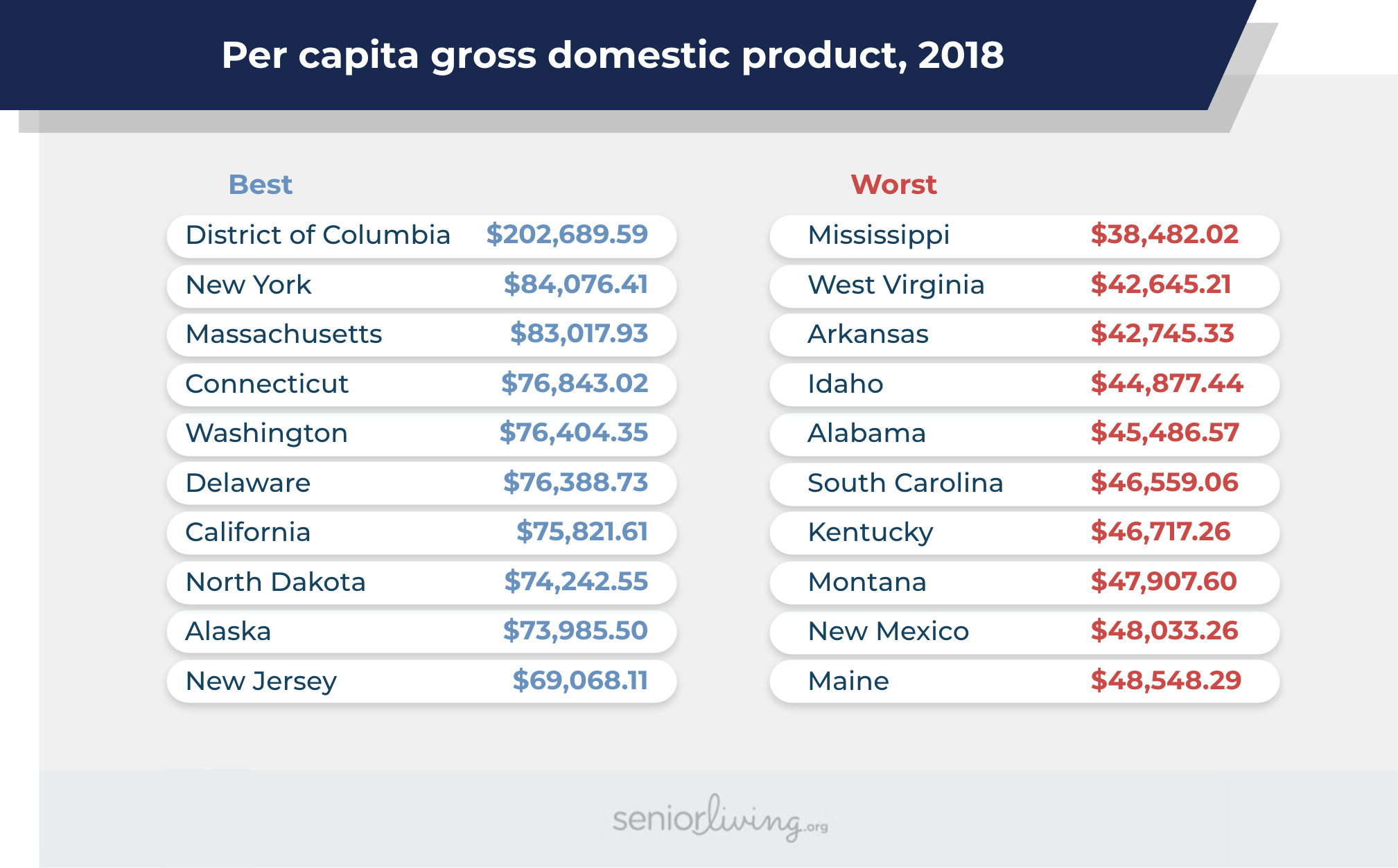 What About Your State?

Interested in seeing the economic situation in your state in more detail? Here’s a look at all the data we used to create our rankings, broken down state-by-state.

As with almost every issue facing a nation as large and diverse as the United States, gauging economic health is not as simple as looking at broad national data, and what’s true for the economic and fiscal health of one state definitely isn’t true for all of them. In many states, wages, employment and total economic production aren’t improving as quickly as in others, so the question of how healthy the economy is definitely depends on your point of view.

To create our 2020 Economic Health Index, we compared all 50 states and the District of Columbia in nine total categories:

In each category, the states were ranked from best to worst and values were assigned to each such that higher numbers equated to better rankings. For instance, Vermont’s November 2019 unemployment rate was 2.3%, the lowest in the country, so that state scored a 51 in that category, compared to the 1 posted by Alaska, which had the nation’s highest jobless rate. Rankings in each of the categories were added together to create the total overall ranking.

All data on unemployment and wages came from the U.S. Bureau of Labor Statistics. November 2019 unemployment rates were published here, and year-over-year changes are here. Five-year change rates were calculated using the 2015 annual averages. Wage data was gathered from tables the BLS for 2018 and 2014.

Figures on the gross domestic product of the U.S. and each of the states came from the Bureau of Economic Analysis. Tables on annual GDP by state can be found here.

The research, analysis and imagery on this page are all free to share for any noncommercial uses. If you wish to share anything you’ve seen here with your audience, please include a link to the URL of this page so proper credit can be given.