In life, experience begets wisdom, and wisdom informs good decisions. Whether we choose to turn to our elders for advice or entrust the citizens of the internet with our burning questions, one thing is for sure: When it comes to navigating the intricacies of romantic relationships, two heads are often better than one.

Reddit is an online content aggregation site that hosts thousands of topical forums dedicated to asking questions, sharing ideas, and discussing diverse hobbies and interests. We decided to dig into a handful of relationship-specific threads that shed some light on contributor's experiences with successful relationships and divorce, including the lessons they've learned along the way and the most important components of a strong marriage.

Get ready to soak up some wisdom from individuals who have been there. Read on to learn more about their personal stories and perhaps even reflect on a few life experiences of your own. 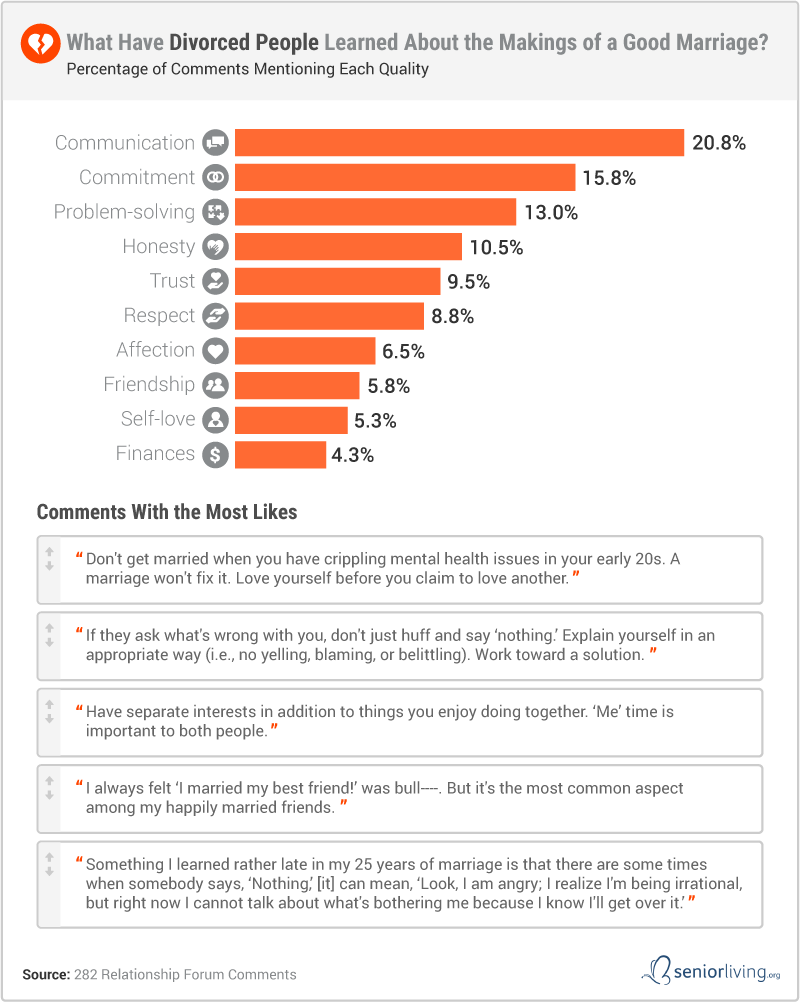 Between 40 percent and 50 percent of American couples go through a divorce, so there is no shortage of input available from individuals who have come out on the other side of a separation. As is the case with many life events and experiences, hindsight can often be 20/20.

According to Reddit's divorced respondents, nearly 21 percent have learned that communication is the key to a successful marriage. Another 15.8 percent listed a solid commitment to the partnership as the most important factor, especially given the many ways in which infidelity can manifest.

Woes of the Wed 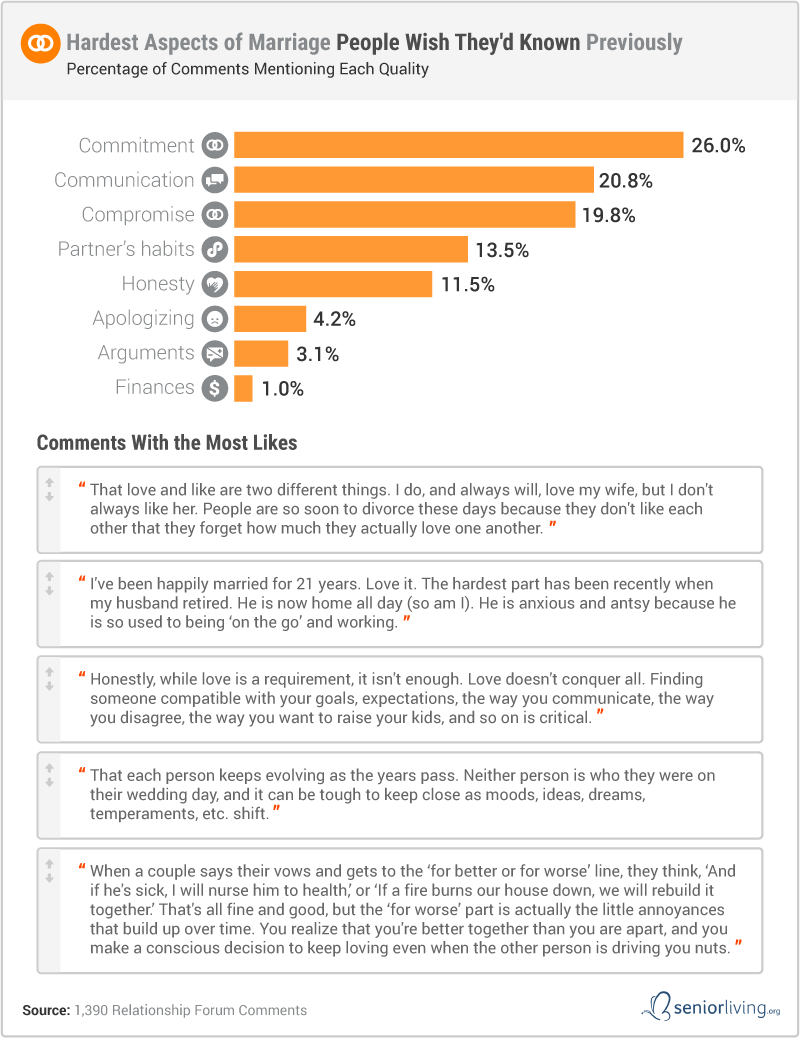 Marriage, just like any other relationship, has its fair share of ups and downs – when two people have been together for decades at a time, how could it not?

Among all of the challenges faced by married folks, 26 percent of commenters said that commitment was the most difficult part of matrimony they wish they knew about sooner. Committing to a single person is so difficult, in fact, that commitment-phobia is a recognized fear.

Next up was communication, which was the most challenging part of married life for almost 21 percent of the online population. Effective communication does not necessarily come naturally to everyone – rather, it is a skill that can be developed with a little time, energy, and effort.

Compromise was another emotional curveball for roughly 20 percent of commenters. Just like communication, learning to compromise is an ability that can be honed and developed, paving the way for more balanced and fulfilling relationships. 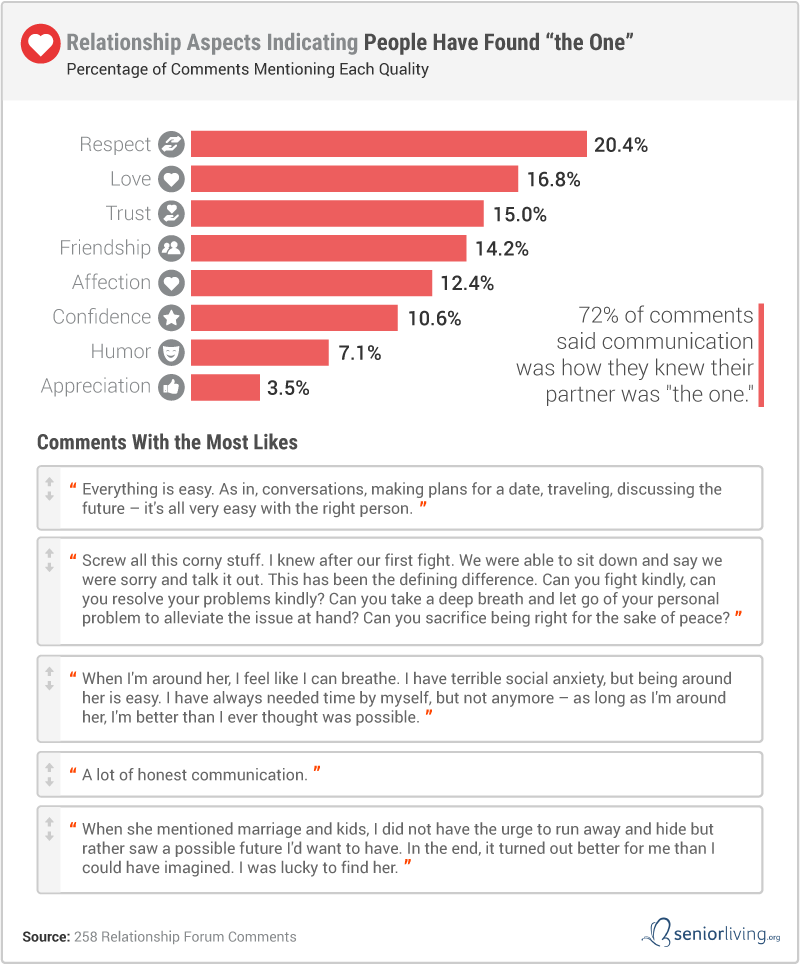 We have already established that communication is an integral part of a happy marriage and something that many comments mentioned as a core relationship challenge. It is no surprise, then, that good communication was the nearly universal barometer for identifying whether people had found "the one."

Seventy-two percent said proper communication was the flashing neon sign indicating their current couplehood was no ordinary relationship. Healthy communication can take on many forms, including speaking face-to-face, identifying the right time for a difficult conversation, and being a good listener.

Pillars like respect, love, trust, friendship, and affection – while extremely valuable for the health of any romantic relationship – were of nearly negligible importance in comparison. 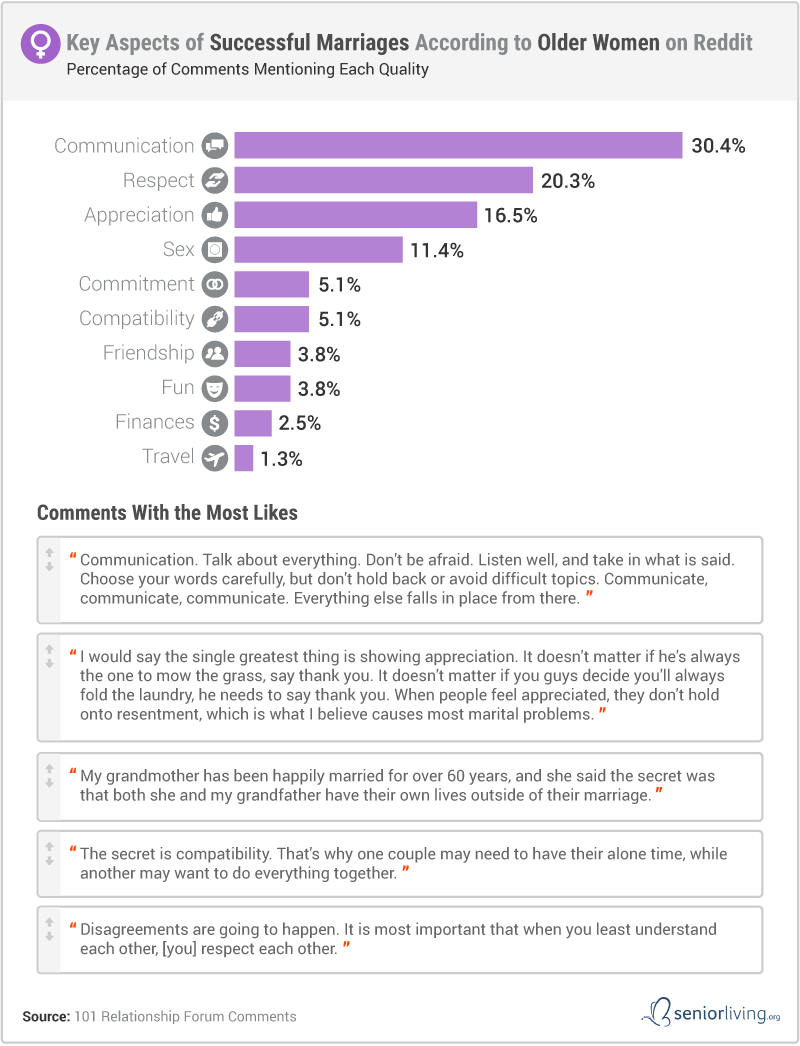 Older women continued the trend of singing the praises of communication, with 30.4 percent listing this one factor as the key to a successful marriage. This demographic also put a particular emphasis on respect, with 20.3 percent of commenters touting it as an essential component of merry matrimony.

The good news is that there are a ton of ways to respect your partner in many situations, such as remaining open to their opinions, supporting their life choices, expressing gratitude, and leaving impatience and irritability at the door.

Appreciation (16.5 percent) and sex (11.4 percent) also got honorable mentions from older women, with percentages dropping off at commitment and compatibility (5.1 percent each). 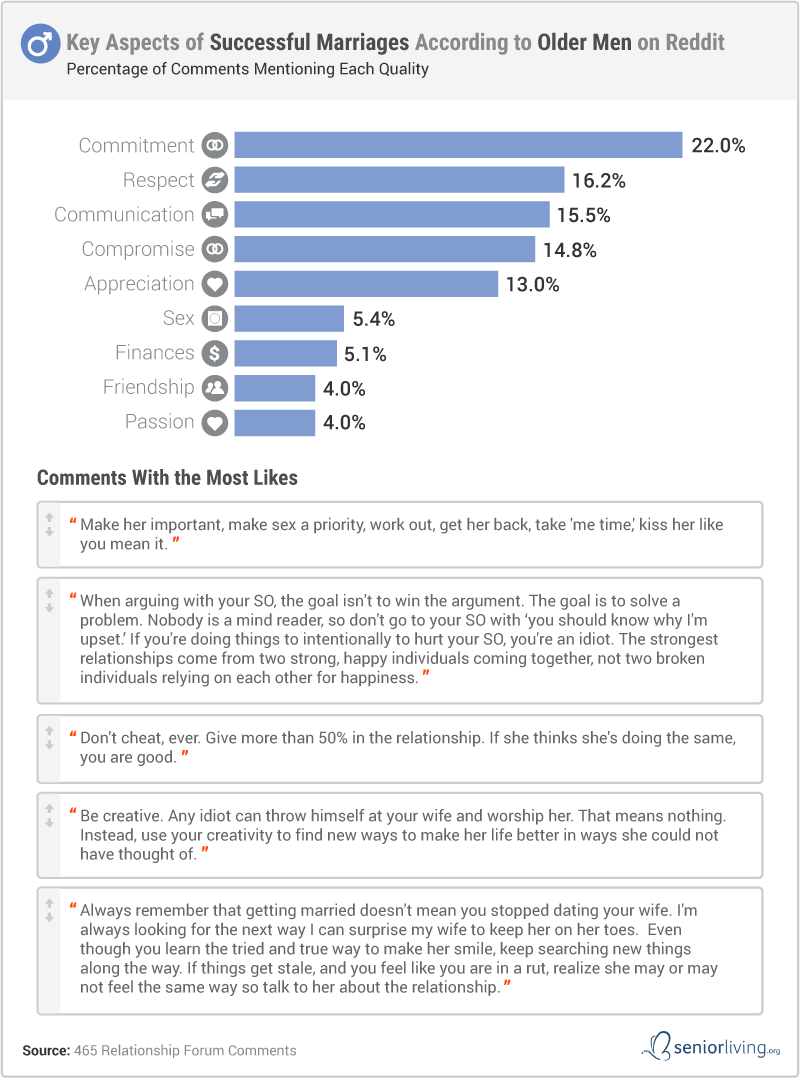 Older men's opinions marked a slight snag in the "communication is king" trend. While this factor was the third most important quality, it was commitment that took home the gold: 22 percent of commenters of this demographic cited this factor as the key to a successful marriage.

Within the context of marriage, commitment can actually take on multiple forms depending on the situation. However, the most important type for a healthy marriage is personal commitment, which sees both partners valuing their emotional bond above all else and staying together because of internal desire as opposed to external pressures.

Respect was also a runner-up among older men, and interestingly enough, sex ranked as the sixth most important quality for this demographic.

Communication was nearly universally lauded as the most important component of a healthy partnership. Whether recounted by divorced people looking back on their past relationships or people reminiscing about the moment they knew they had found "the one," the idea of communication as a tool for success reigned supreme.

Nearly one-third of older women listed this pillar of couplehood as the most important part of a healthy marriage, although older men exhibited a firm belief in commitment above all. When it came to distinguishing the average relationship from a real gem, communication was once again the winner.

We gathered 2,496 comments from r/AskReddit threads about long-lasting relationships, finding the one, and lessons learned from divorced people. We then classified comments by subject matter according to their use of various keywords and phrases for analysis. To determine the most popular responses to our questions of interest, comments were then organized by the number of likes each had received from the Reddit community. Comments that were not relevant to the original thread were excluded from the analysis.

Have you fallen head over heels for this content? Feel free to share it with your audience for noncommercial purposes only. When doing so, please link back to this page so that our authors receive proper credit.