Seniorliving.org’s 2021 Report on Age Discrimination in the Workplace

Fault lines exposed by a global pandemic have forced America to confront social injustices based on ethnicity, orientation, and gender…but one prejudice that often remains overlooked is age discrimination.

Though several federal statutes expressly forbid age-based discrimination, the practice remains so common in the workplace that social scientists have dubbed it the “last acceptable prejudice”.

As older Americans continually comprise a larger portion of the population and workforce, age discrimination is poised to become another civil rights hotspot affecting millions of people and hundreds of billions of dollars in economic growth.

With that in mind, we conduct annual research to monitor age discrimination in the workplace. Our first study was last year and set a baseline against which momentum might be measured.

Though the pandemic and recession that dominated this past year complicate direct comparisons, several compelling insights can be found in data collected from nearly 1400 Americans aged 40+:

This cloudy year presented few silver linings, but our research indicates that a reduction in workplace age discrimination was one of them. 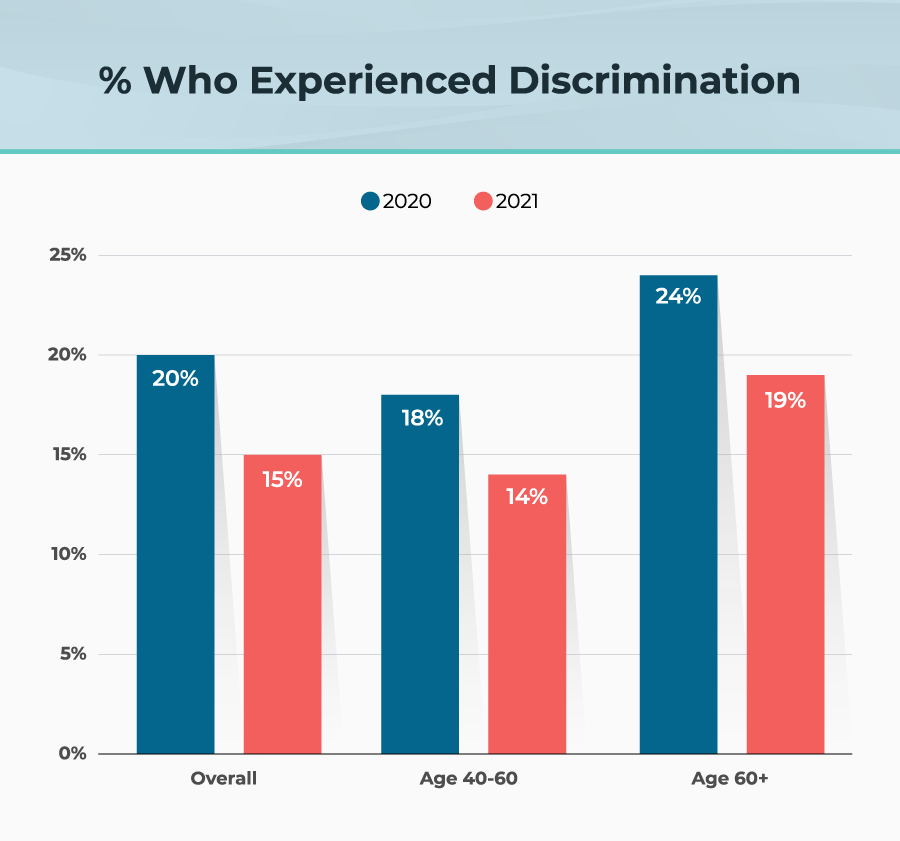 Overall, the number of workers reporting age-related discrimination at their current job dropped from 20% in 2020 to 15% in 2021. Comparable improvement was seen across different age groups, with discrimination among those aged 40-60 declining from 18% to 14% and those over 60 experiencing a similar slide from 24% to 19%.

Psychological intangibles — like increased empathy and renewed respect for older Americans who endured the virus – may have played a role in reduced discrimination, but there were also measurable factors at play. Post-pandemic hiring difficulties make older applicants more valuable, and expanded remote working opportunities make their employment more viable, as well as more insulated from discrimination. 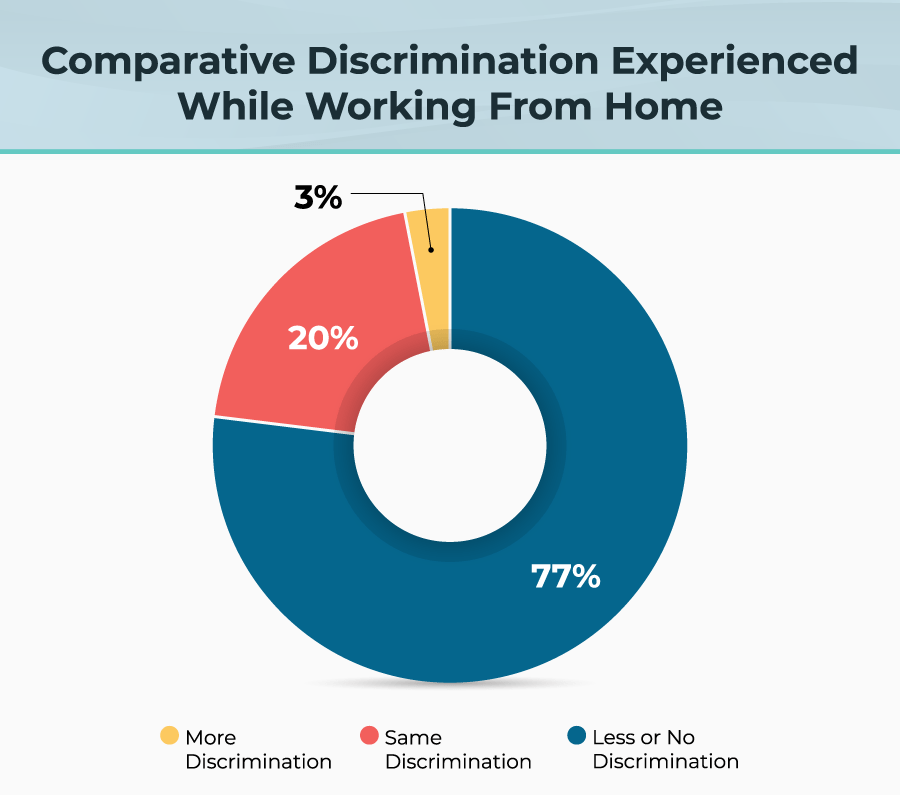 Effects and Empowerment by Age

Though there was progress in the battle against workplace ageism last year, the fight is far from over. Reducing discrimination further will require accurate identification of offenses and widespread reporting of prejudice, each of which tends to vary by age.

Age-related bias comes in many forms, and we found that the nature of discrimination varied as workers grew older. 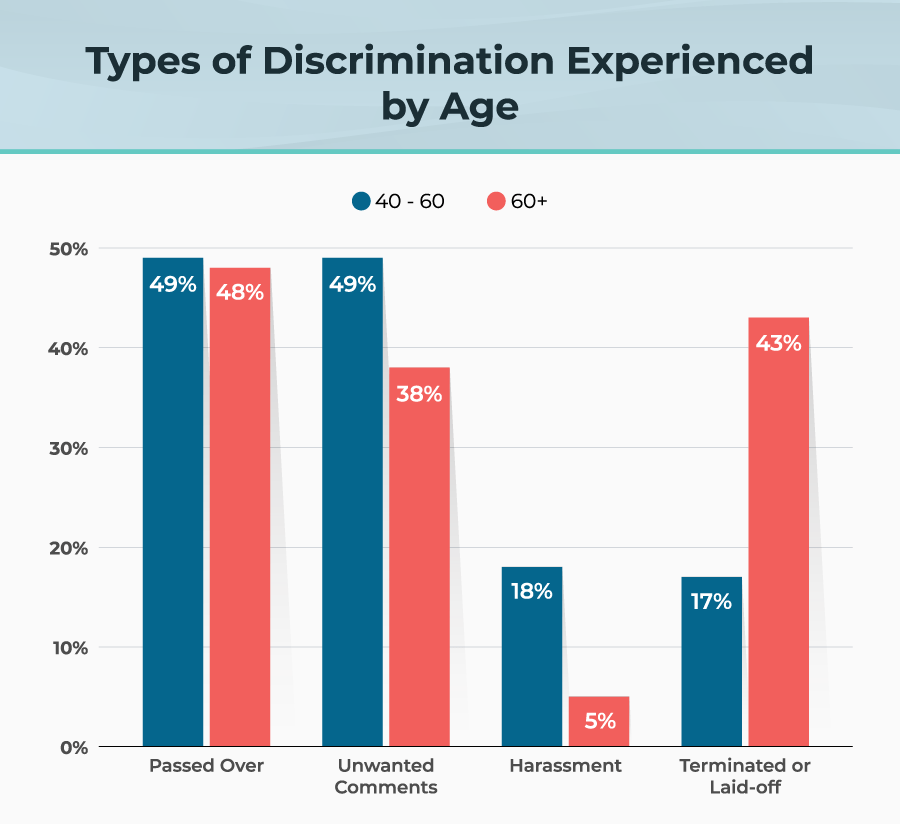 Being passed over for raises and promotions was the most common form of prejudice suffered by those on either side of 60, but other unfairness was inflicted at very different rates.

Respondents aged 40-60 reported almost 30% more incidents of ageist comments, and 300% more age-related harassment compared to those over 60. Perhaps those transitioning into later years are more sensitive to verbal triggers and treatment, indicating that employers should reinforce training and guidelines for communication with that group.

Workers over 60 suffered less harassment but reported discriminatory terminations and layoffs 2.5X as often as 40-60 year-olds (43% to 17%). Losing one's job is arguably the harshest form of discrimination, and one that's difficult to redress with a former company, so older Americans must know their rights and legal options in such instances.

Lawyers, HR departments, government oversight, and common sense all provide basic guidance for thwarting age discrimination – but employers must be aware of shortcomings before they can address them.

The fight against ageism relies upon victims to report workplace bias, and their willingness appears to vary by age. 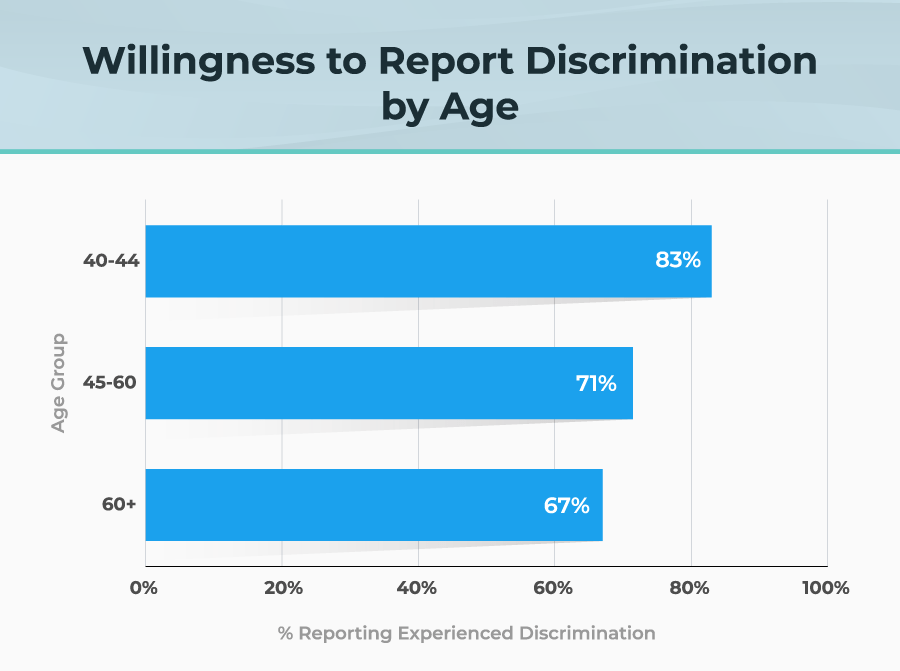 The older the victim, the less likely they were to report discrimination, though their stated reasons for not reporting the offenses remained consistent among age groups. 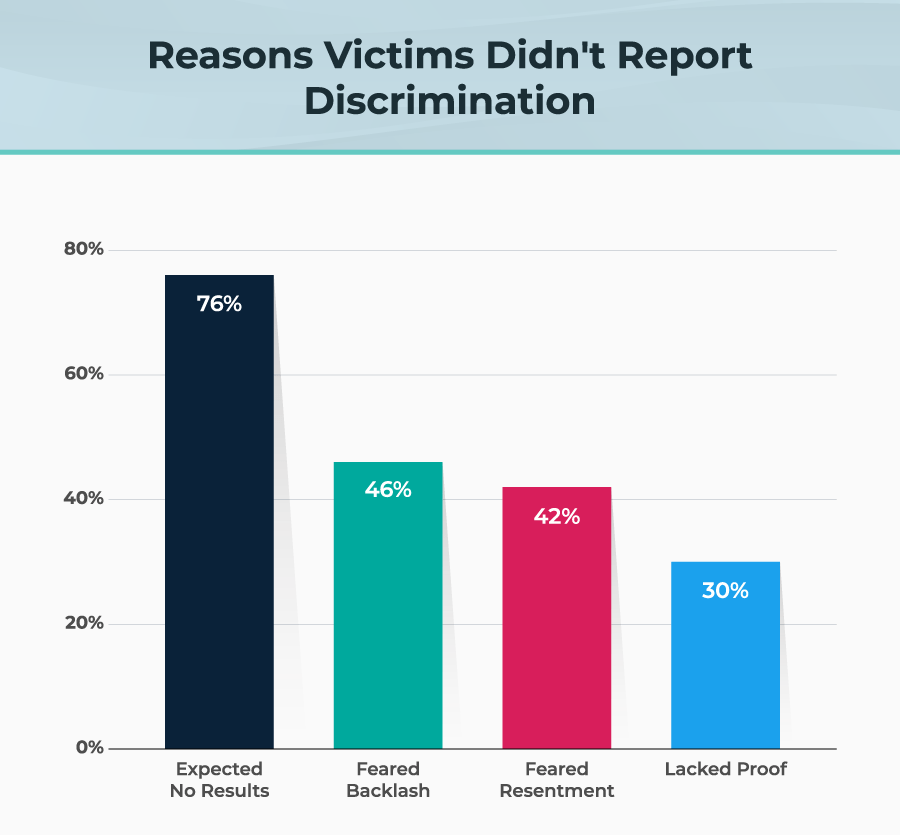 Reluctance to report age discrimination primarily stemmed from the belief that nothing would be done in response to the complaint…and this often proved to be the case. 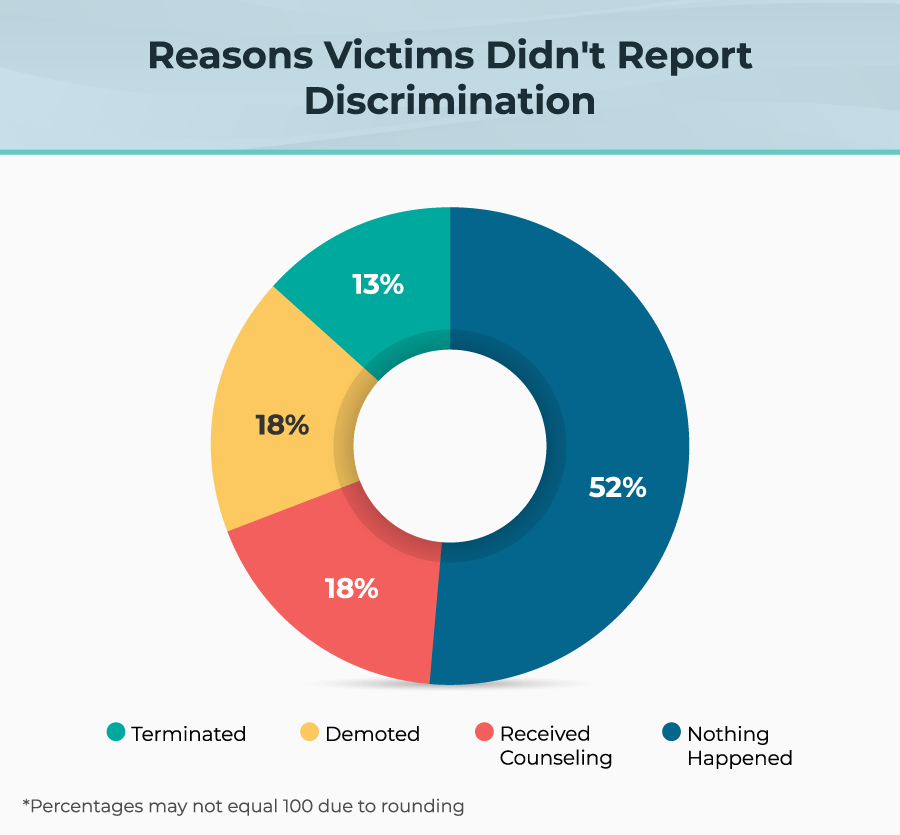 Even when victims reported age-based discrimination, employers ultimately took no action against alleged offenders in over 50% of the cases. This rate was even higher in cases lodged with large employers.

In fact, several statistical points of interest were observed based upon company size, indicating that it may be one of the key factors in diagnosing ageism.

Americans work for businesses of all sizes, and feedback gathered during our research revealed that the frequency, reporting, and repercussions of discrimination often correlated to payroll counts. 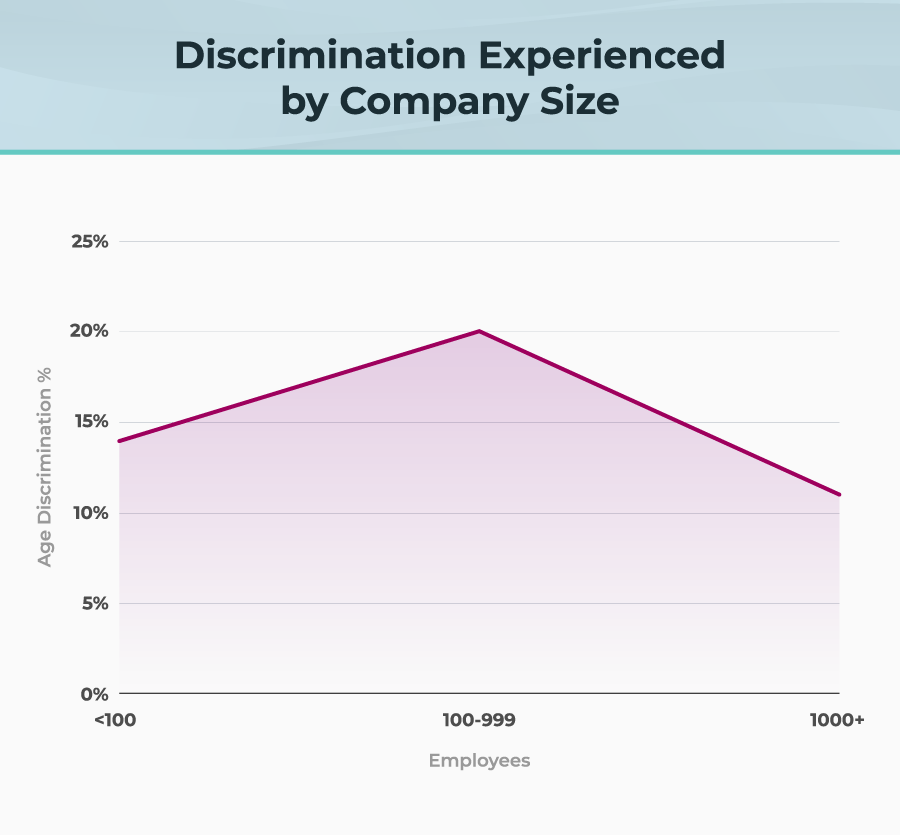 The number of employees who experienced age-based discrimination at smaller companies (< 100 workers) was a moderate 14%. That number shot up to 20% at mid-sized firms (100-999 workers) and dropped dramatically to 11% at the largest employers (>1000 workers).

That spike mirrors last year's findings, and are not surprising given typical company cultures at various sizes.

The personal connections and loyalties forged in smaller workplaces likely diminish the perpetration (and perception) of discrimination. Mid-sized companies lack the same intimacy/trust and are often businesses in the midst of expanding more rapidly than policy or personnel can manage. Conversely, large employers have usually already emerged from growing pains with full legal departments, experienced HR staff, higher public accountability, and perhaps some tough lessons behind them.

More surprising is the disparity in reporting rates found among the different-sized businesses. 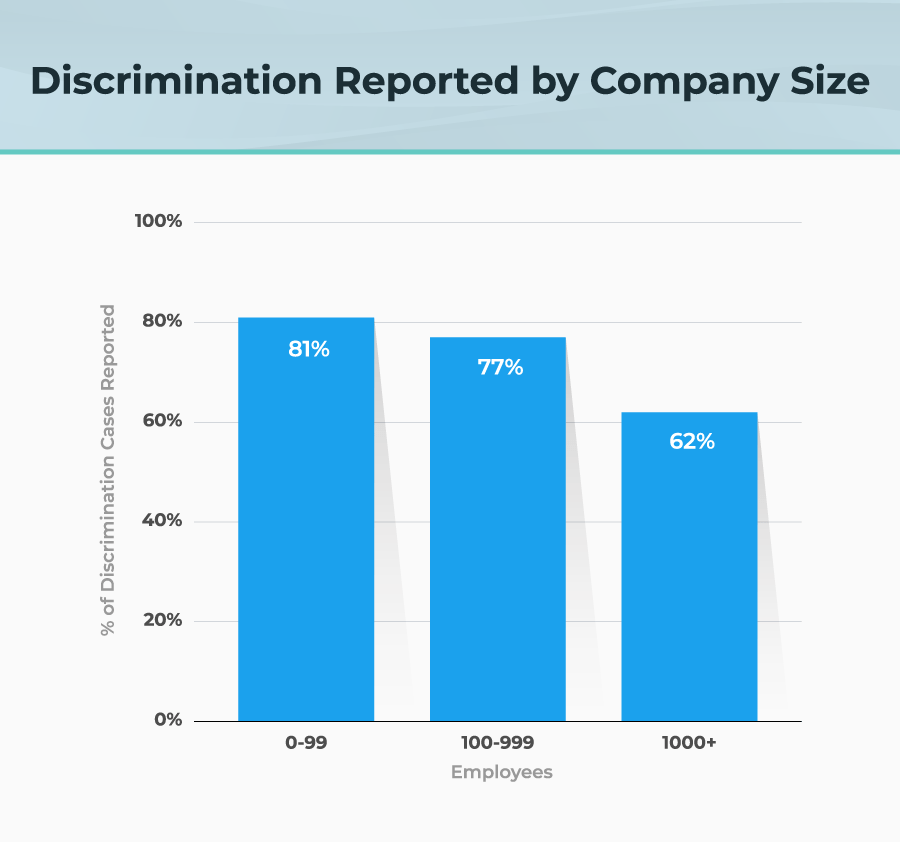 Despite effectively minimizing the amount of ageism experienced on the job, the largest corporations inspired the least confidence in employees to report offenses when they occurred. Their workers reported only 62% of discriminatory acts, compared to 77% at mid-sized companies and 81% at the smallest employers.

Perhaps it's more intimidating to confront a corporate giant, or maybe it's the well-founded belief that nothing will be done to rectify the problem…which was the outcome in 74% of reported cases at the largest firms. 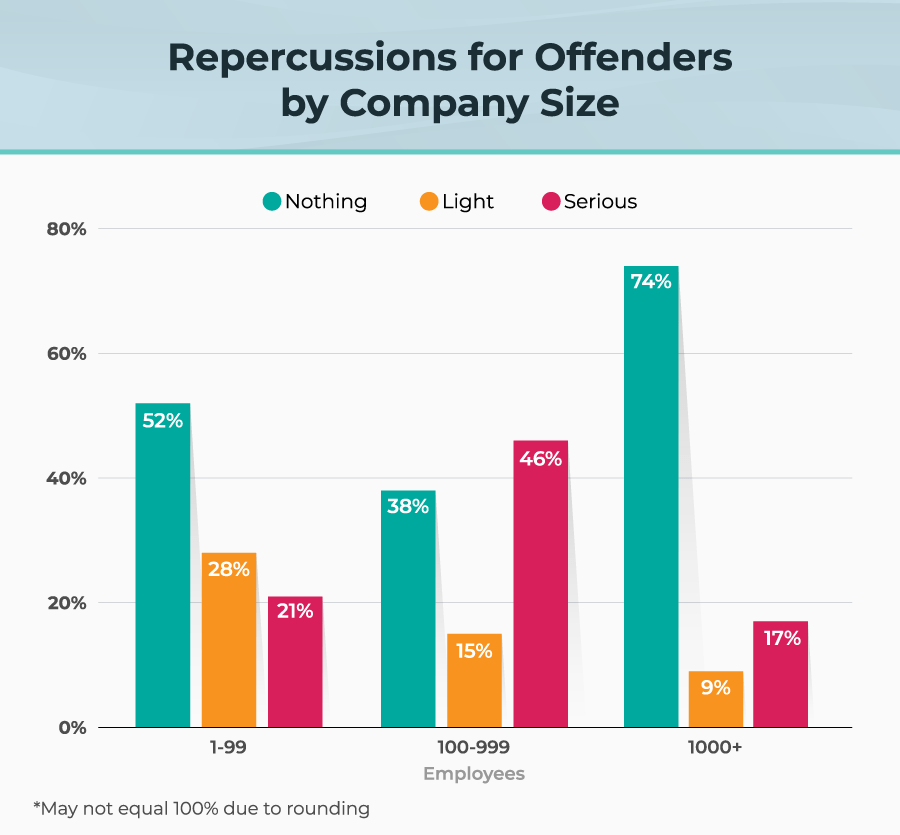 An absence of consequences can't be labeled unjust without assessing the merits of each allegation, but even the perceived lack of accountability dissuades future reporting and leads many to suffer in silence. The takeaway would appear to be that larger corporations should focus as much on addressing discrimination transgressions as they do on preventing them.

Breaking down the data along gender lines revealed remarkably equitable results regarding the sexes. The amount of discrimination, types of discrimination, and willingness to report offenses were essentially identical for men and women…with one significant exception.

The severity of consequences suffered by offenders deviated widely depending upon the gender of the victim. 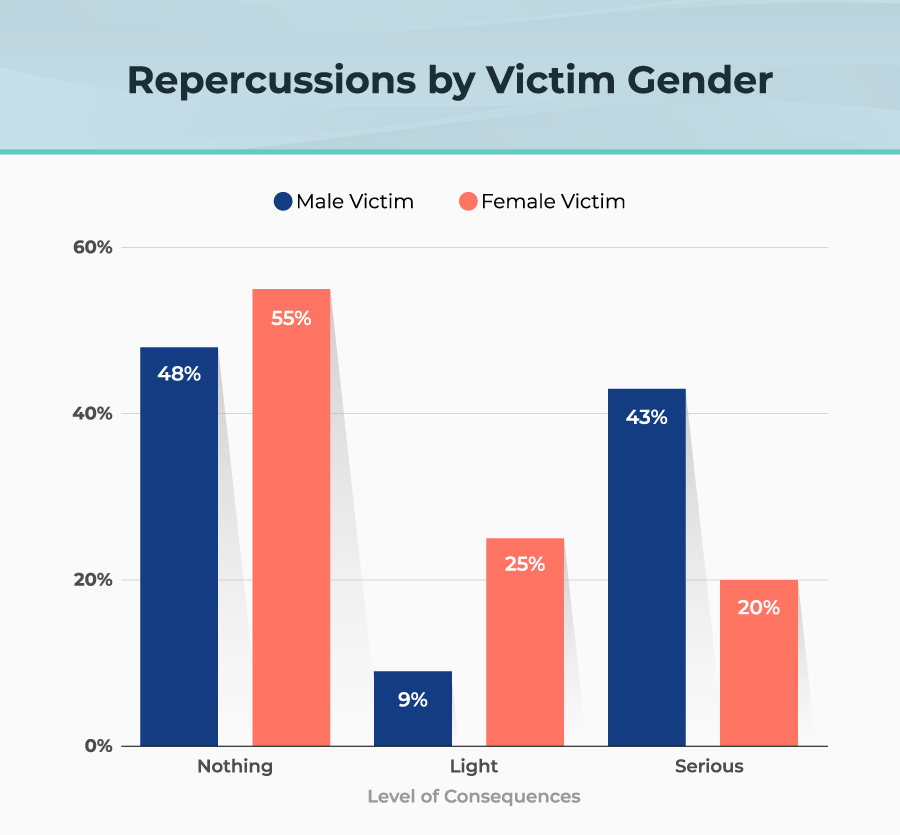 While nothing was done in response to roughly half of the discrimination complaints by either sex, consequences ifor wrongdoing were far harsher when the case was filed by a man.

Serious disciplinary actions (demotion, termination) were twice as likely when the victim was a man, while those who discriminated against women were let off with counseling nearly three times as often.

These numbers indict current disciplinary proceedings as mechanisms that view age-based discrimination as a less serious transgression when committed against women.

A challenging 2020 ravaged the health and prosperity of many Americans, but also ushered tides of social change, like reduced age discrimination in the workplace.

What remains to be seen is whether that improvement was a sign of evolution, an illusion in an anomalous year, or a limited perspective from the eye of a storm.

We know that employers traditionally use economic downturns to shed senior salaries (the “Great Recession” brought a jump in age-based discrimination claims and a similar surge is expected in COVID's wake)…but heightened social awareness has made ageism less acceptable, remote working has made it less prevalent, and labor scarcity may put a premium on hiring/retaining older workers.

The numbers inspire cautious optimism, but a deeper reading of the results suggest that further progress will require:

This survey was conducted in keeping with SeniorLiving.org's mission to provide accurate information, insightful analysis, and quality advice regarding issues important to older Americans. Data was gathered from 1,380 people over age 40 regarding their workforce participation, employment background, personal experience with age-based workplace discrimination, and job changes imposed by pandemic restrictions.