17 Million U.S. Seniors With Hearing Loss Do Not Use Hearing Aids

More than 1 in 4 seniors forego hearing aids because of cost, but more over-the-counter options may be available soon

Millions of American adults could benefit from using hearing aids. Yet, fewer than 1 in 3 adults over 60 with hearing loss use them. To help us understand why this gap exists, we analyzed a study of Americans aged 55 or older as well as data from the National Health Interview Survey (NHIS) to get a sense of current attitudes about and usage of hearing aids.

Our study revealed a number of barriers that stop people with hearing loss from purchasing hearing aids, including cost, comfort, and appearance. Luckily, technological advances and shifts in political ideologies are paving the way towards more accessible hearing aids.

Read below for the full report on why people forego hearing aids, who's planning to upgrade their devices, and what advances hearing aid users are likely to benefit from in the near future.

According to our analysis of NHIS data, about 34 percent of all seniors over 60 in the U.S. have some trouble hearing. People ages 60-69 were most likely to report hearing loss. 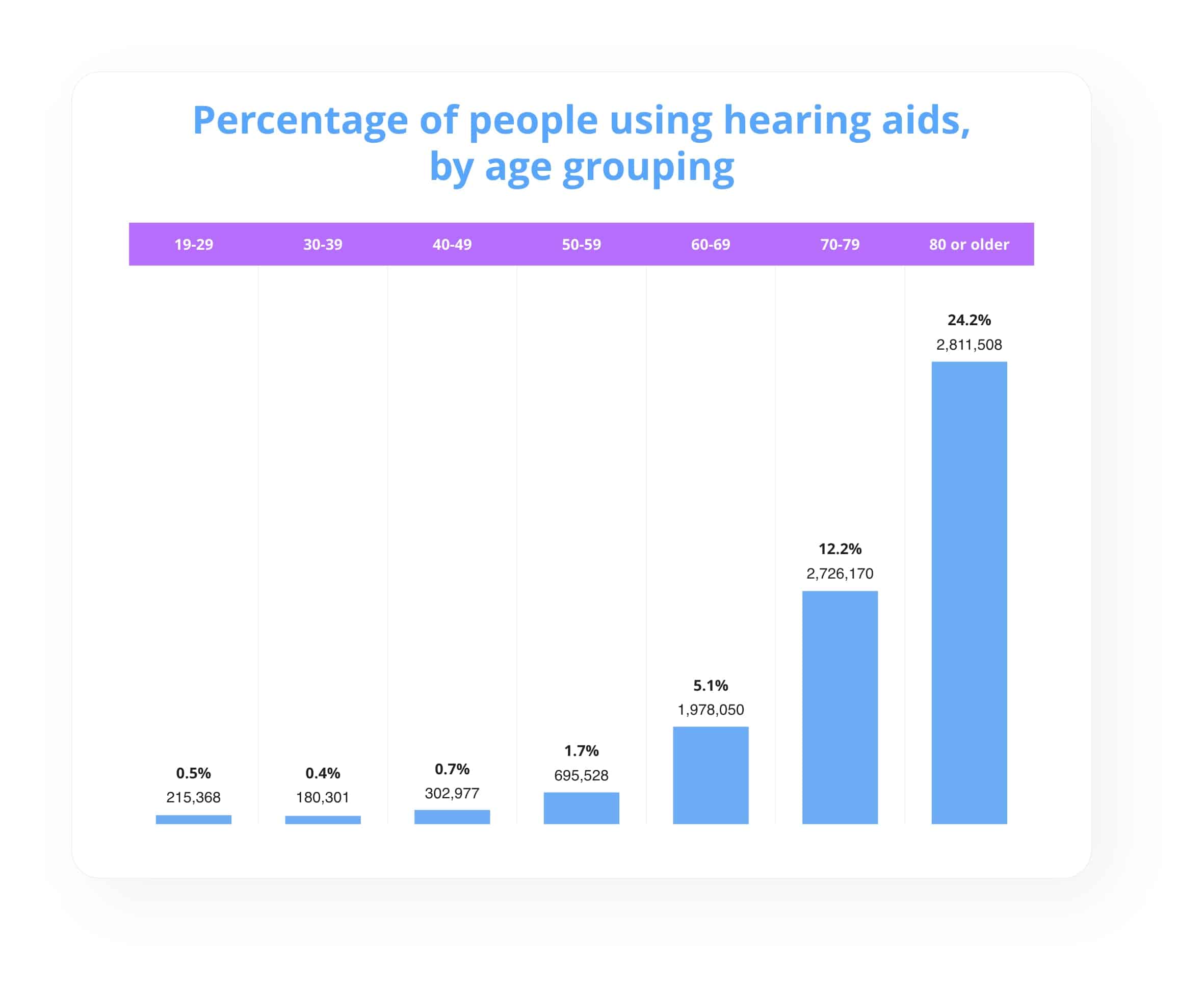 Hearing aid usage among people with hearing difficulties is relatively low: According to the 2018 NHIS, only 28 percent of people aged 60 or older with poor hearing use hearing aids. Nationwide, this is more than 17 million people.

Hearing aid usage among people with at least some hearing loss, by age group

More than half of people with minor hearing loss don't use any devices to support their hearing, though. This is perhaps due to lack of awareness about their hearing loss, the cost of devices, or feeling that they can function well enough without a hearing device. Stigma surrounding hearing loss or aids may also be a factor.

Hearing aid technology has come a long way since its inception. Even the most basic hearing aid models today perform better than the highest quality hearing aids of previous years. Nearly three out of four people in our study using hearing aids felt satisfied with their performance.

Although most people in our study found their current hearing aids effective, 55 percent of users plan to upgrade their aids within the next year.

Hearing aid technology is continuing to evolve to benefit users. Modern-day hearing aids are becoming increasingly automated, helping users navigate conversations and hear better in difficult listening situations. While many hearing aids in the past were large and bulky, many of today's models are smaller and sleeker than ever. Some of the latest features include Bluetooth compatibility, remote support, and remote microphone technology

Why do people forego hearing aids?

This is an improvement over last year, when 38 percent of people told SeniorLiving that hearing aids were too expensive. As businesses reopened, the economy began to rebound, and relief checks were mailed out, more people might have been able to afford hearing devices in 2021.

As mentioned above, cost was a key player in many people's decisions to wear hearing aids. Of the people we surveyed, 85 percent said cost was a factor in their decision to purchase hearing aids.

Hearing aid costs vary widely, ranging from $1,000 to upwards of $5,000. Typically, a set of hearing aids falls somewhere in the middle. However, there are often additional costs when purchasing hearing aids, including the price of hearing tests and hearing aid fittings.

One of the biggest reasons people with hearing difficulties choose to go without hearing aids is inaccessibility. Not only can hearing aids themselves be costly, but the sheer task of hearing tests and fittings may be enough to deter some people.

Additionally, hearing aid dispensers often work with a small number of manufacturers, meaning hearing aid wearers may be limited in their options and may have no choice but to buy a more expensive hearing aid model.

Another factor that drives up the cost of hearing aids is bundling or bundled pricing. When hearing aid users can choose unbundled services, they can lower their expenses by selecting only the necessary items.

Despite millions of Americans experiencing hearing loss, most insurance policies do not cover the cost of hearing aids or examinations and fittings.

If healthcare plans include hearing benefits, they are often limited, covering only a portion of hearing aid costs. In some cases, insurance plans may offer discounted hearing aids from specified healthcare providers, but this is far from enough coverage for some.

While the standard Medicare plan has some hearing benefits, it does not cover hearing aids or hearing tests. However, the Medicare Advantage Plans offer optional coverage for hearing aids at an additional cost. The plan typically covers the hearing aids themselves, as well as the cost of examinations and fittings.

Impact of Hearing Aids on Quality of Life

According to our analysis of NHIS data, people over 60 who have significant difficulty hearing but do not use hearing aids are two times more likely to report feeling depressed daily or weekly than those with poor hearing who use hearing aids.

Depression frequency among people 60+ with at least some hearing loss

Hearing loss makes it difficult for people to participate in conversations, which can lead to feelings of loneliness or isolation. If hearing aid accessibility improves, thousands of American citizens may be able to improve their quality of life and even their relationships.

As the population of people over 65 grows in the next 10 years, so will the number of people shopping for hearing aids. Luckily, some of the barriers to acquiring hearing aids appear to be coming down.