Happiness, Satisfaction and Aging in 2020:
More than four in five seniors report their “satisfaction with life” is the same, better or much better than they expected as youths.

Several studies, including a recent AARP study found that more 60-plus adults said they were happy than those between 18 and 39. We wanted to better understand what areas of life are most satisfying for older adults and how those things compared to how they imagined aging as youths. With Generation X officially joining the 55 and older crowd, we also wanted to understand what younger generations think they might have in store as they grow older.

More than 800 adults who self-reported which generation they belonged to (Silent Generation, Baby Boomers, Generation X, Millennials or Generation Z; we used the generally accepted years of those generations) provided us detailed information about aging. Here's what we found:

We asked seniors to rate their life satisfaction compared to their expectations at youth. For the purposes of this study, we define seniors as 55 or older; which encompasses two distinct generational groups — the Silent Generation, those who were born before 1945, and Baby Boomers, those born between 1946 and 1964. (On the heels of Baby Boomers are members of Generation X, the oldest of whom will be turning 55 this year.) 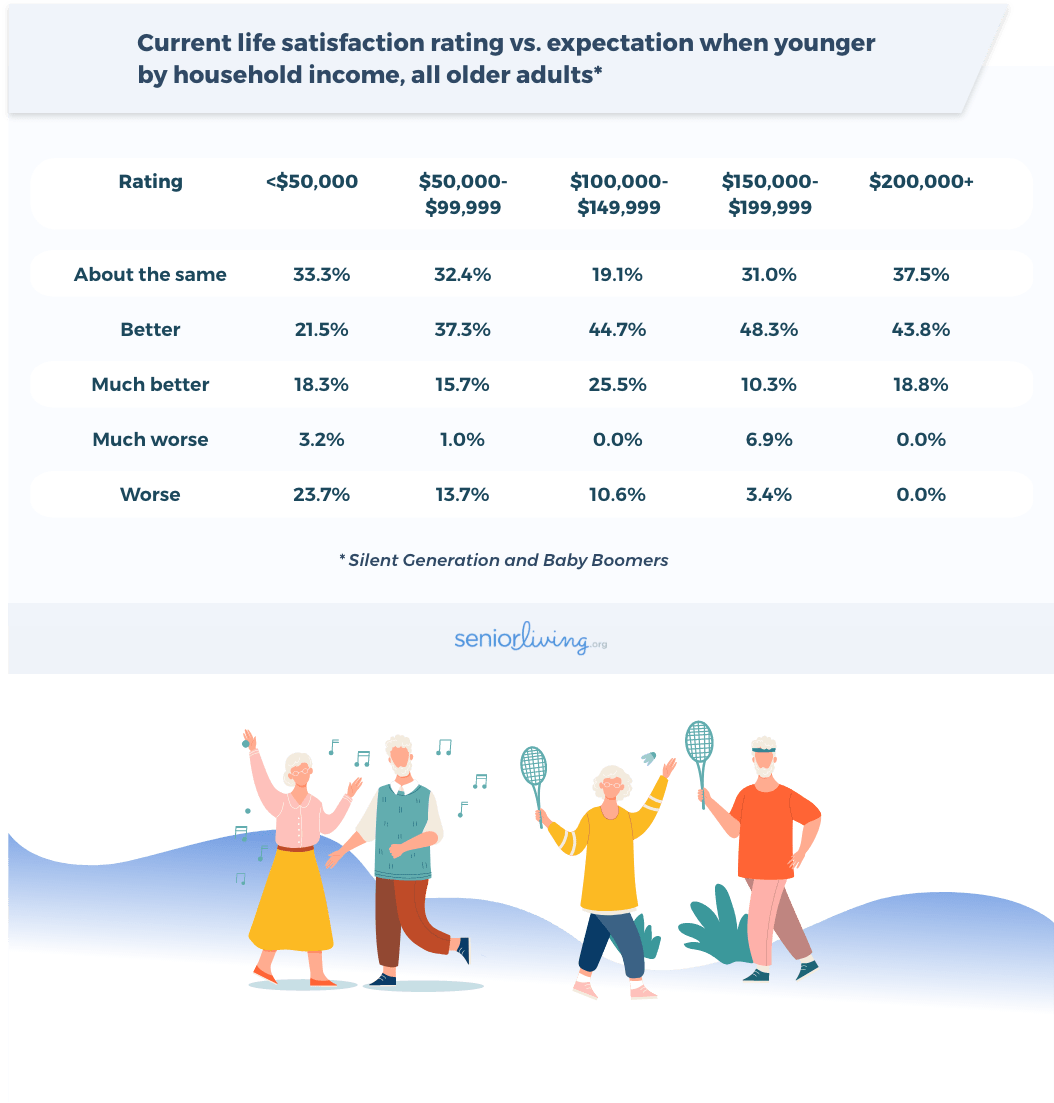 For about 30 percent of those 55 and older, their lives have turned out about as they expected when they were younger, but generational differences are stark when separating members of the Silent Generation from Baby Boomers.

Almost one in four Boomers rated their current life satisfaction as “worse” or “much worse” compared to their expectations vs. less than 10 percent of Silents. In both cases, “much worse” was the least common answer, but Boomers were about twice as likely to rate their lives that way than Silents.

Conversely, members of the Silent Generation rated their lives as “better” or “much better” at about a 57 percent rate compared to about 49 percent of Baby Boomers. 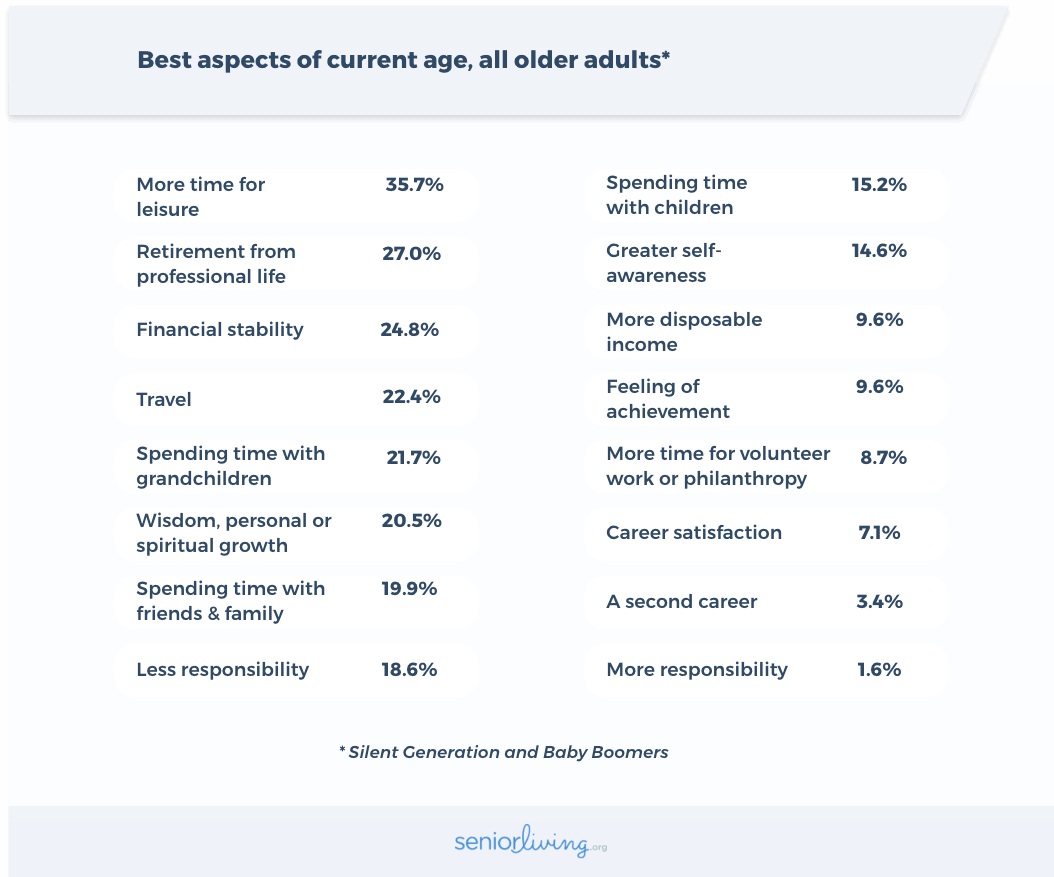 Differences along gender lines were less pronounced than when considering the generation older adults belong to, but there are a few clear distinctions. About one in five men rated their lives as “worse” or “much worse” relative to their expectations vs. about one in seven women.

Female survey respondents were equally as likely to rate their lives as “about the same” as to say they were “better” than expected. In each case, about one in three women chose that rating level when thinking about their plus-55 lives compared to what they expected when they were younger. 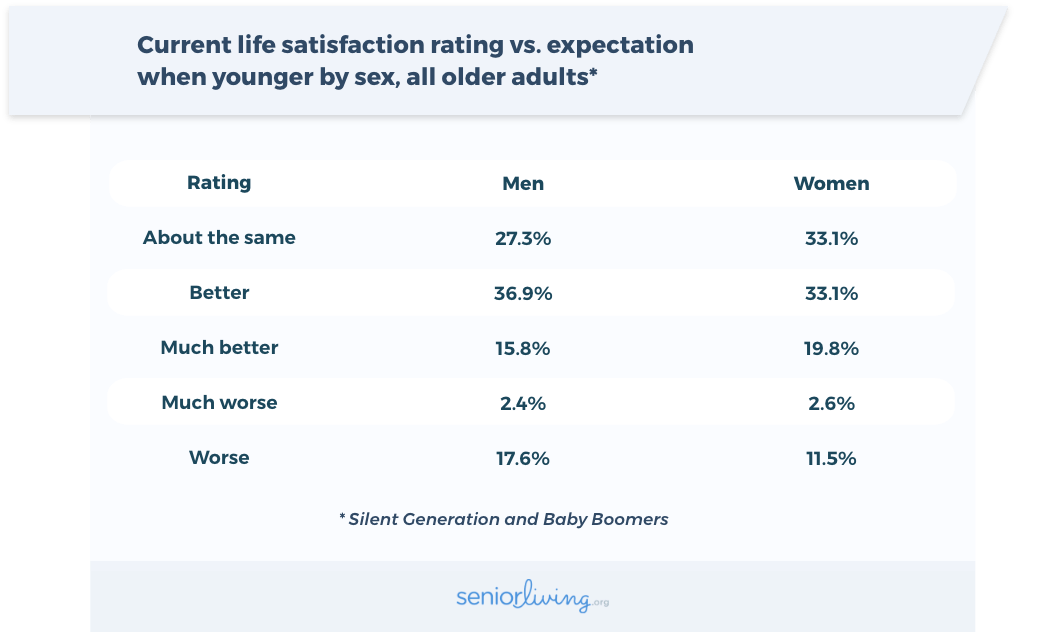 Though it's perhaps not surprising, the biggest predictive factor in current life satisfaction was income. The bracket most likely to rate their lives as worse than they expected were those with household income below $50,000. In that group, more than one in four said that compared to their expectations, their lives at 55 and older were “much worse” or “worse.” No other group broke a combined 20 percent for those two ratings.

On the other hand, about one in three of the poorest older adults in our survey said their lives were “about the same” as expected, which is similar to what other income brackets reported.

Interestingly, the middle-income group, those with household income between $100,000 and $149,999, were the most likely to say their lives were better than they'd expected. Just over seven in 10 members of this group rated their lives at “better” or “much better” than expectations, though more than half of every group except those earning less than $50,000 said the same. 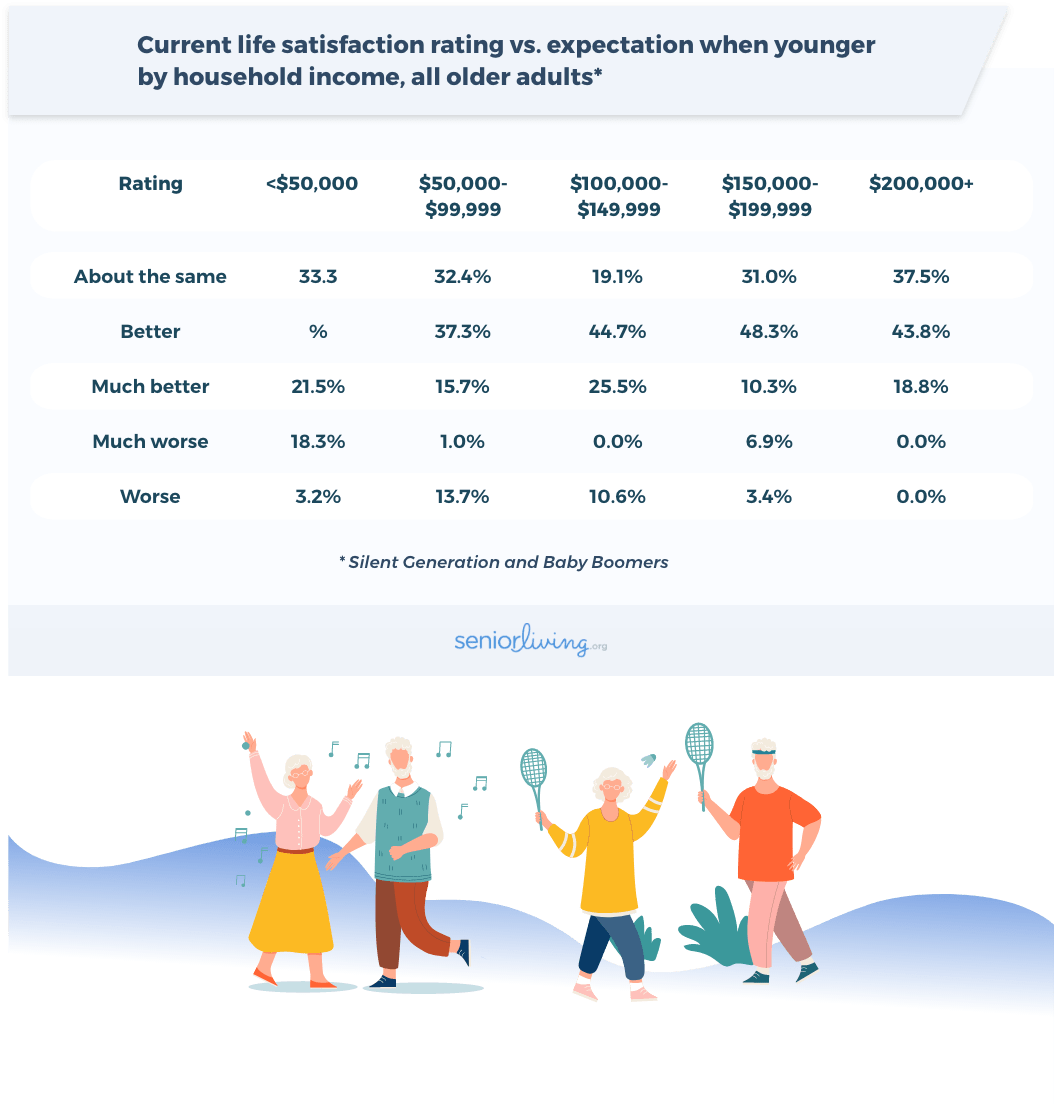 What's Best About Getting Older?

If the majority of seniors are happy, and more than half of those 55 and older say their lives are better today than they expected when they were younger, what makes getting older so great? We asked respondents to tell us their three favorites from a list of factors that can make a person's golden years especially sweet.

Some reasons relate to no longer being part of the workforce, while some are a bit more ethereal. More than one in three older adults said having more leisure time is the best aspect of being their age, followed by retirement (27 percent) and financial stability (about 25 percent). 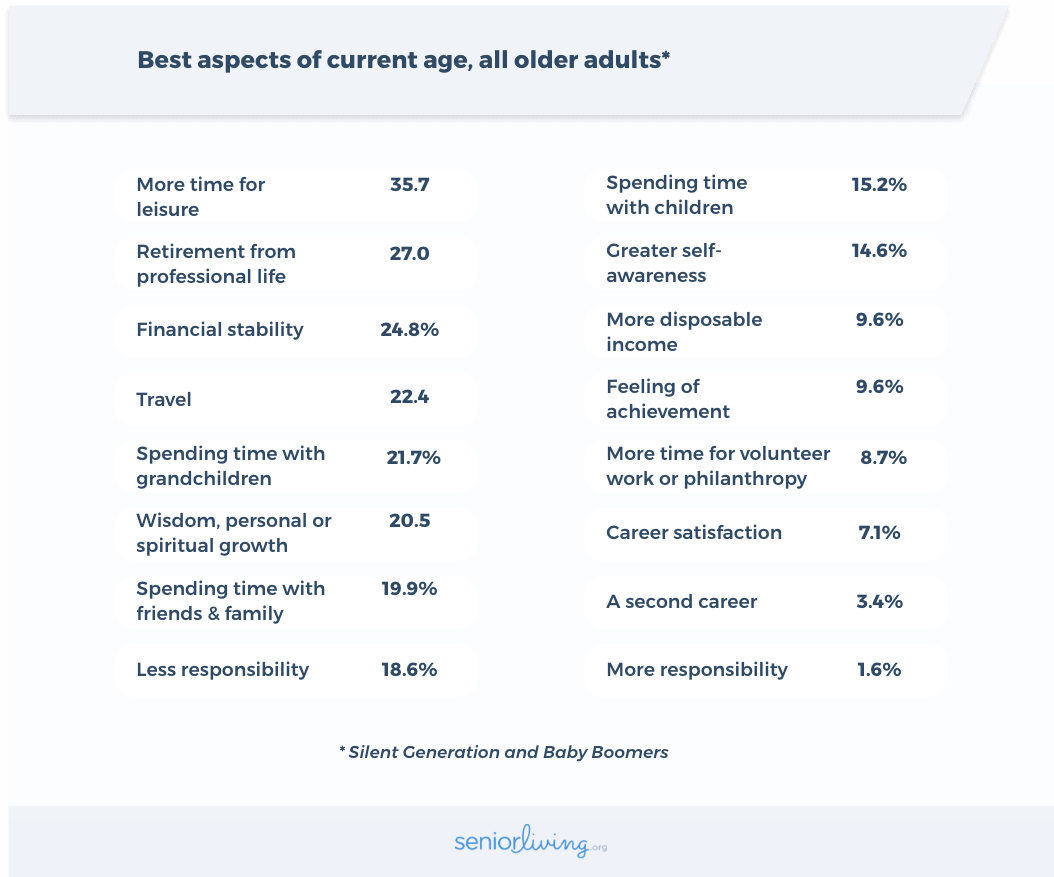 Interestingly, older adults are more excited about spending time with their grandchildren than with their children (about 22 percent vs. just over 15 percent), while few seniors in our survey were excited about having second careers or taking on additional responsibility. Travel was relatively popular, though it's outside of the overall top three, while the wisdom that allegedly comes with age was a top selection for about 21 percent of respondents.

As with overall satisfaction and expectations, major differences were noted on a generational level. 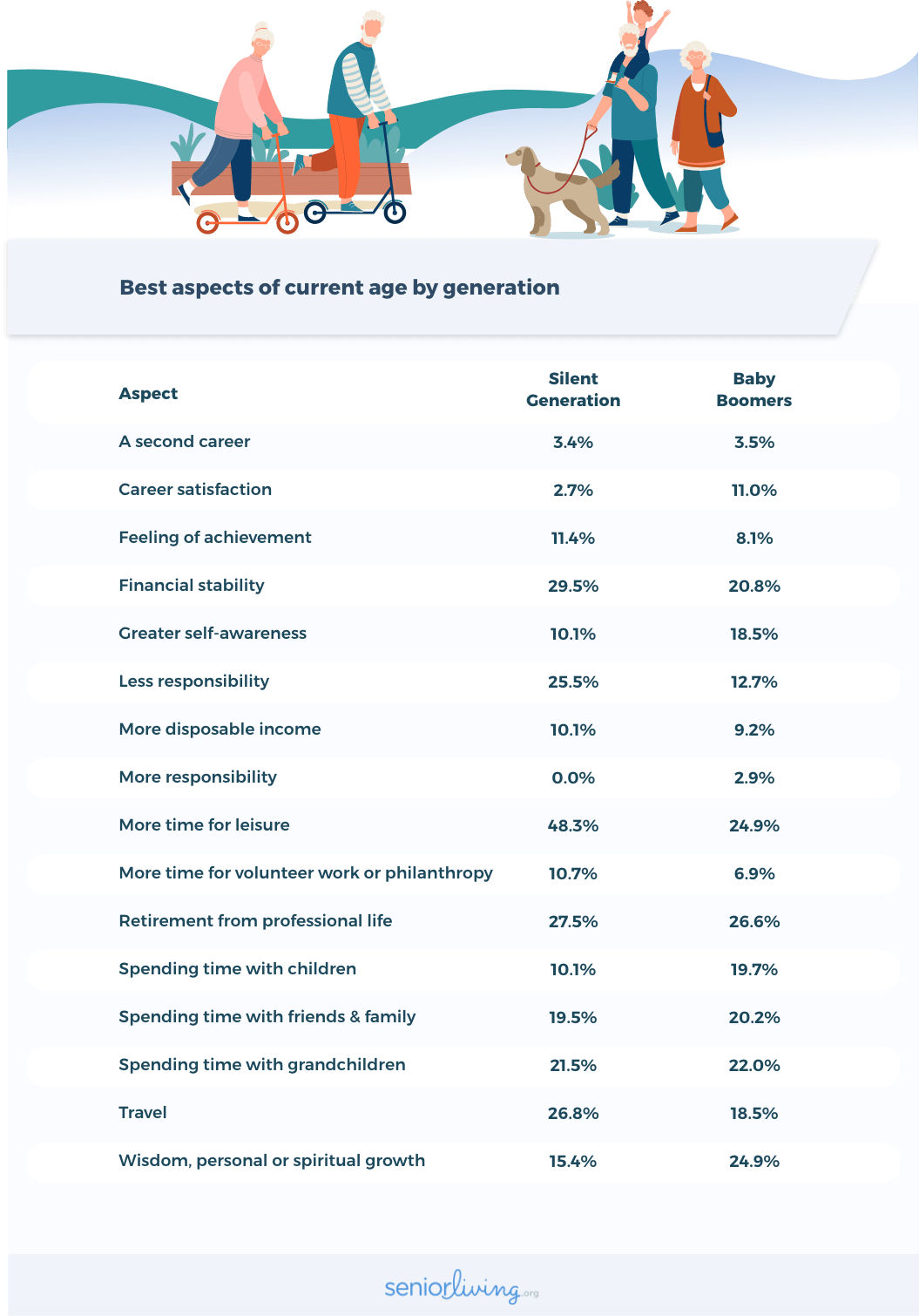 While both Silent Generation members and Boomers were equally as uninterested as second careers and more responsibility, they differed considerably in several notable areas, including:

In most cases, male and female respondents didn't differ wildly in their estimation about which aspects of aging were the best, though there were some notable exceptions. For example, while few older adults are excited about the prospects of a second career, men were much more likely than women to put that in their top three. 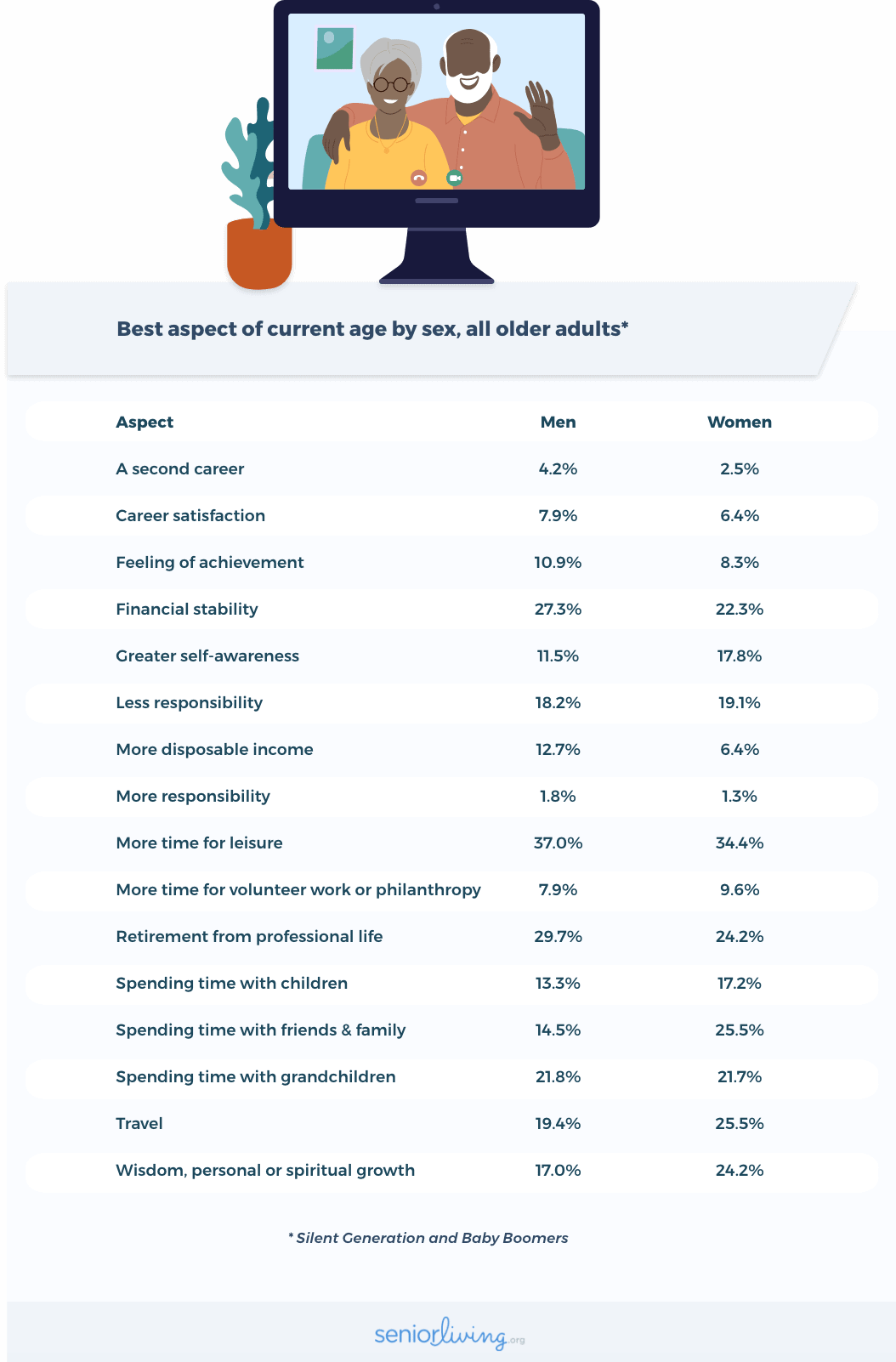 Men and women were about equally as likely to list having less responsibility, more leisure time, and spending time with grandchildren among their top three, but in a handful of other ways, they diverged.

For example, in rating greater self-awareness and personal/spiritual growth or wisdom, women were several percentage points more likely to put these aspects in their top three. About one in four women said personal/spiritual growth or wisdom was one of the three best things about their age, while only about 12 percent of men said greater self-awareness was a favorite aspect of aging. 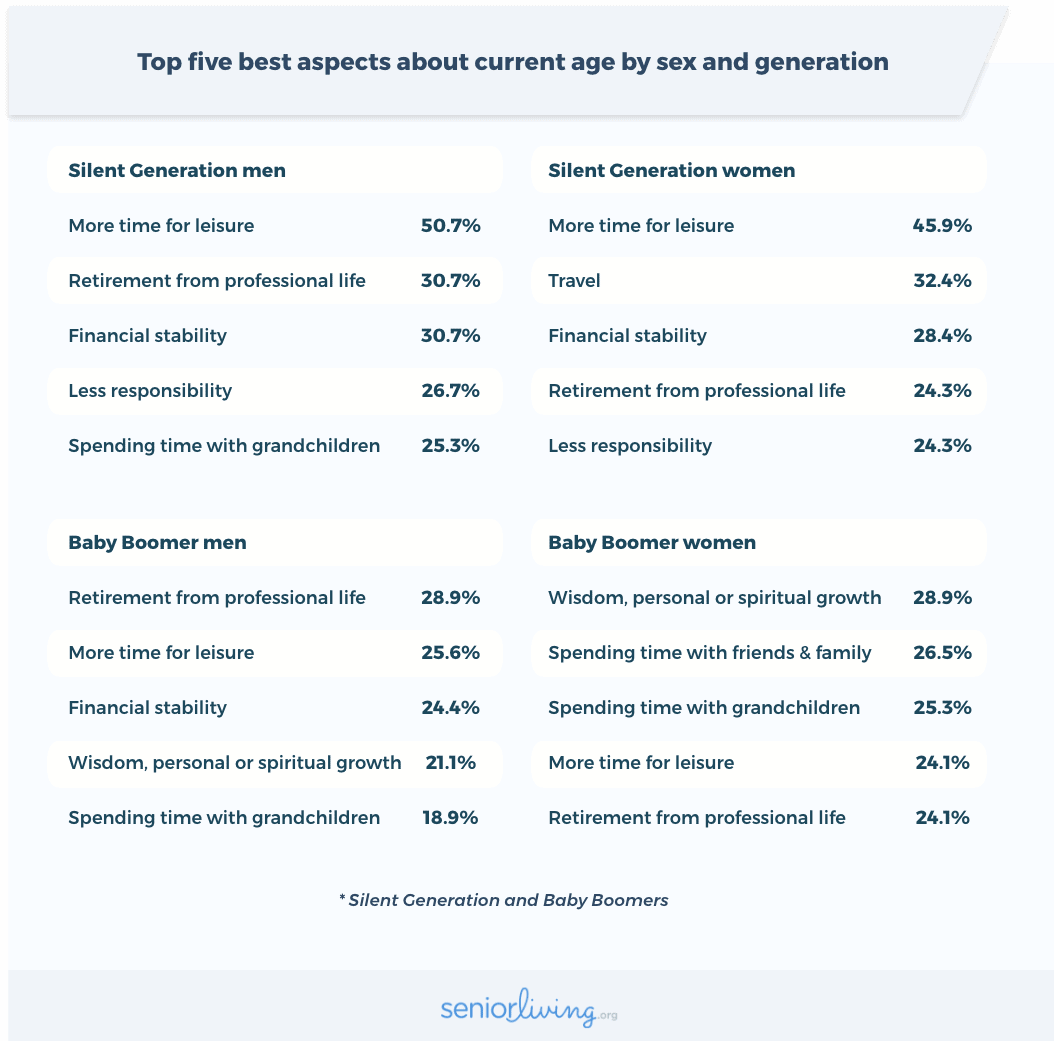 A few other notable findings across gender and generation for older adults:

We've explored a bit about how older adults think of their lives compared to how they expected to feel at this age, but we also asked respondents to rate a handful of positive aspects about aging from the perspective of their younger selves. To be exact, we asked “When you were younger, what did you most look forward to in becoming an older adult?”

As with previous questions, respondents could select up to three aspects of aging that applied most to them. By far, the three features respondents said they were most expecting to enjoy once they reached this age were travel, financial stability, and having more time for leisure.

All three of those answers were among the most commonly cited aspects of what is best about aging, but in every case, the expectation didn't exactly come true. For example, nearly 52 percent of older adults said that travel was among the things their younger selves most looked forward to, but only about 22 percent of seniors said travel was one of the best things about aging.

Of course, we're living in the time of COVID-19, so perhaps the pandemic is cramping seniors' travel style. Let's take the second most common answer, financial stability. Just under 51 percent of older adults said their younger selves expected financial stability to be among the best things about getting older, but in reality, that was the case for less than half that number (just under 25 percent). 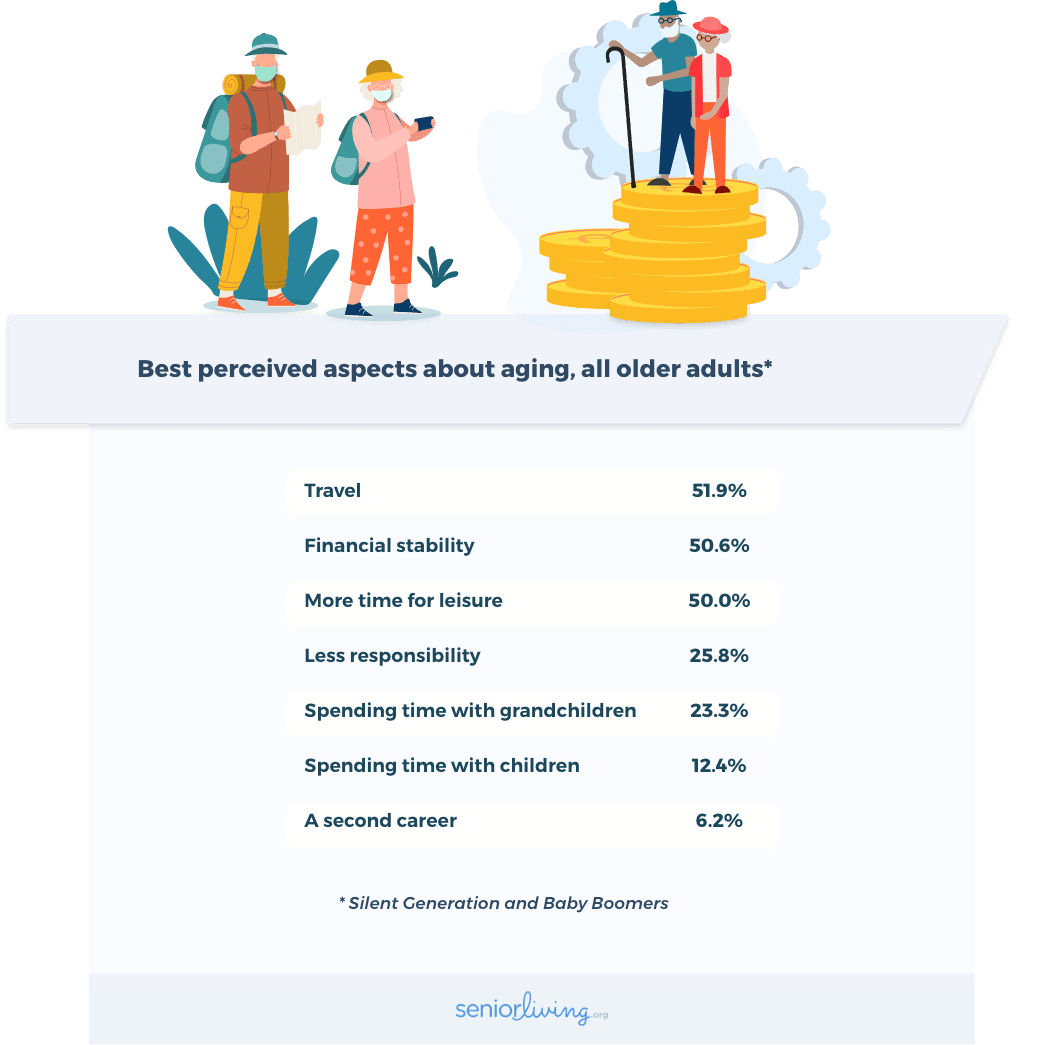 In all cases, respondents said their younger selves overrated these select aspects of aging, though some answers were pretty close to reality. For example, just over 23 percent said they'd looked forward to spending time with grandchildren, and just under 22 percent of older adults listed that as one of the favorite features of their lives today.

Respondents varied about what they expected to be the best aspects of getting older along both gender and generational lines. For example, Silent Generation men were most likely to say financial stability was one of the things they were most looking forward to, while Silent Generation women rated travel and leisure time as a tie for what they thought would be best about aging.

Financial stability was what Baby Boomer men most looked forward to, while leisure time was No. 1 for their female counterparts. 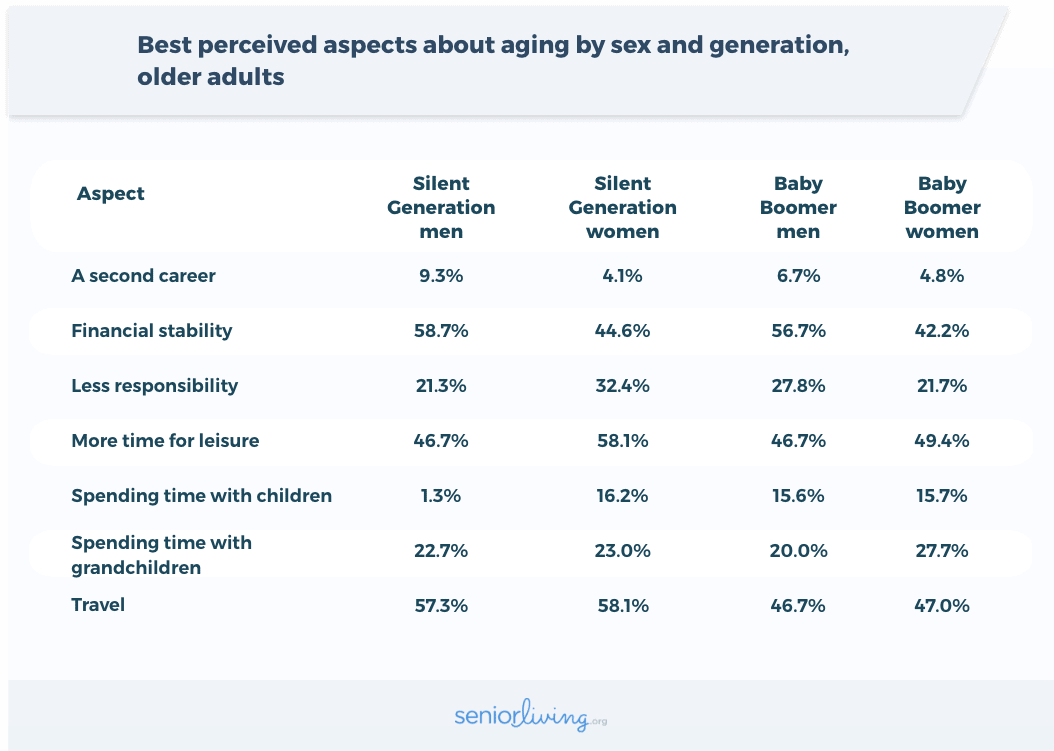 How did their predictions stack up to reality? As with the group overall, seniors tended to overrate positive aspects of aging when compared to reality. Some of the differences were stark, including:

About 4 million members of Generation X, the oft-overlooked, disaffected MTV generation, will turn 55 years old in 2020, so they're right on the edge of being older adults. But for the purposes of our survey, we've grouped Gen-X'ers, Millennials and Gen-Z'ers in one group of younger adults — people between the ages of 18 and 54.

Younger adults, as their Silent Generation and Boomer counterparts, rate travel as the aspect of aging they're most looking forward to, though the gap between travel and financial stability, which also ranked second for older adults, is much more pronounced. But notably, all respondents were fairly well-aligned in rating financial stability and leisure time as positive aspects of getting older (around 47-50 percent in both groups listed them among the things they were looking forward to about being in the older-adult age bracket).

Another notable difference: Just over 12 percent of older adults said that when they were younger, one of the aspects of aging they most looked forward to was spending time with their children; nearly 28 percent of younger adults said that's one of their most anticipated activities. This is perhaps a product of many respondents in the younger age group not yet having children, though the two groups had similar expectations about spending time with grandchildren. 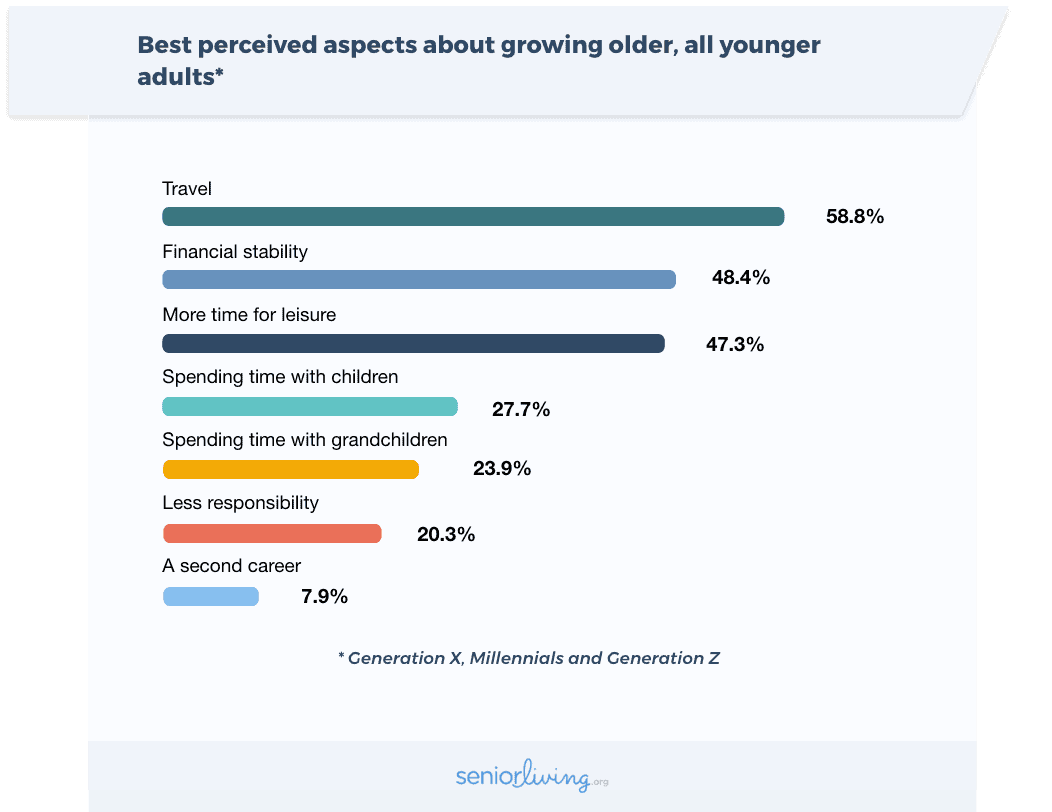 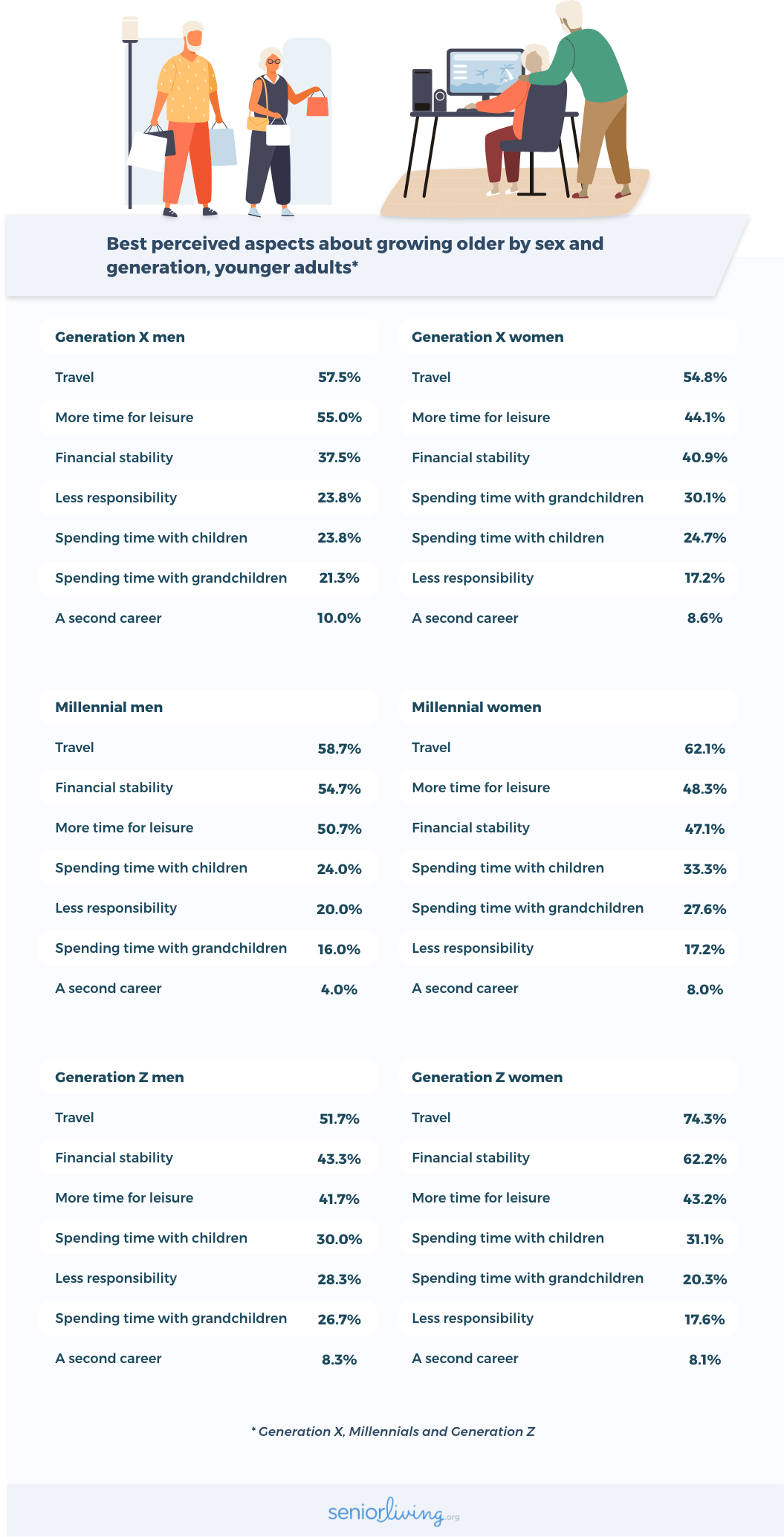 Men in Generation Z, often referred to as Zoomers (a play on Baby Boomers), were the only gender/generational group among younger adults that didn't rate travel as the top thing they were looking forward to as they grow older, though their answers generally were spread more evenly than any other group. It's also worth noting that Zoomers were the least represented generation group in our survey.

Nearly three in four female Zoomers said travel was something they were looking forward to when they get older, which was the highest percentage, followed by Millennial women, about 62 percent of whom said the same.

Financial stability is in the top three answers for every group (and No. 1 for Gen Z men), while the lowest-rated aspect of aging is the prospect of a second career. This is probably because few of these people are even halfway done with their first career, but it's notable that the group rating a second career highest are those closest to retirement — 10 percent of Gen X men and nearly 9 percent of Gen X women.

The quality of one's life is intensely personal, and it can change depending on the day. Studies have shown there's a serious happiness shortage in the U.S. (and it's getting worse because of the pandemic), but if the respondents in our survey are any indication, the best years may still be ahead.

We surveyed nearly 800 Americans about their attitudes toward aging, including asking those whose generations aren't yet retirement age about what they're most and least looking forward to as they age, as well as asking older adults what's best about being the age they are.

Here are the generational definitions we used:

Our survey was conducted online in September 2020.