The State of Cancer Care in the U.S.

Despite seemingly miraculous advances in the treatment of cancer in recent decades, the disease remains the second-leading cause of death in the United States, killing hundreds of thousands of Americans every year. Nearly 600,000 people in the U.S. died from cancer in 2017, the most recent year for which complete national data is available.

Ancient Greek physician Hippocrates, considered the father of medicine, is credited with coining the word, using carcinos and carcinoma, Greek terms relating to crabs, to describe different types of tumors. Those were later translated into the Latin word for crab, cancer.

The early days of cancer treatments amounted to little more than palliative care, as the commonly accepted view was that cancer was incurable and that intervening medically may do more harm than good. Even in the cases in which surgery was used, such as in some early-stage breast cancers, it wasn’t until the 19th and 20th centuries, with the advent of anesthesia and antiseptics, that cancer surgery became a viable option for prolonging a person’s life.

Chemotherapy and radiation started to become common treatment options for some cancers in the mid-20th century, and today, advances in treatment and diagnostic techniques mean that a diagnosis of cancer, while serious and sobering, is not necessarily a death sentence. And a better understanding of the personal lifestyle choices that can raise a person’s cancer risk is helping to further lessen the fear of the disease.

In fact, 2017 saw the largest single-year decline in the rate of cancer deaths since health officials began studying this rate. It seems modest (a 2.2% decline), but that equates to thousands of lives.

A great deal of progress is being made against cancer at the national level, but what is the state of cancer across the country? Where are rates the highest, and where do the states stand when it comes to making strides in the eradication of the many forms of this dreaded disease?

To understand where the states stand, we analyzed decades of data from the American Cancer Society, including projections of cancer rates and deaths in 2020, as well as survival rates for some of the most common types of cancer. 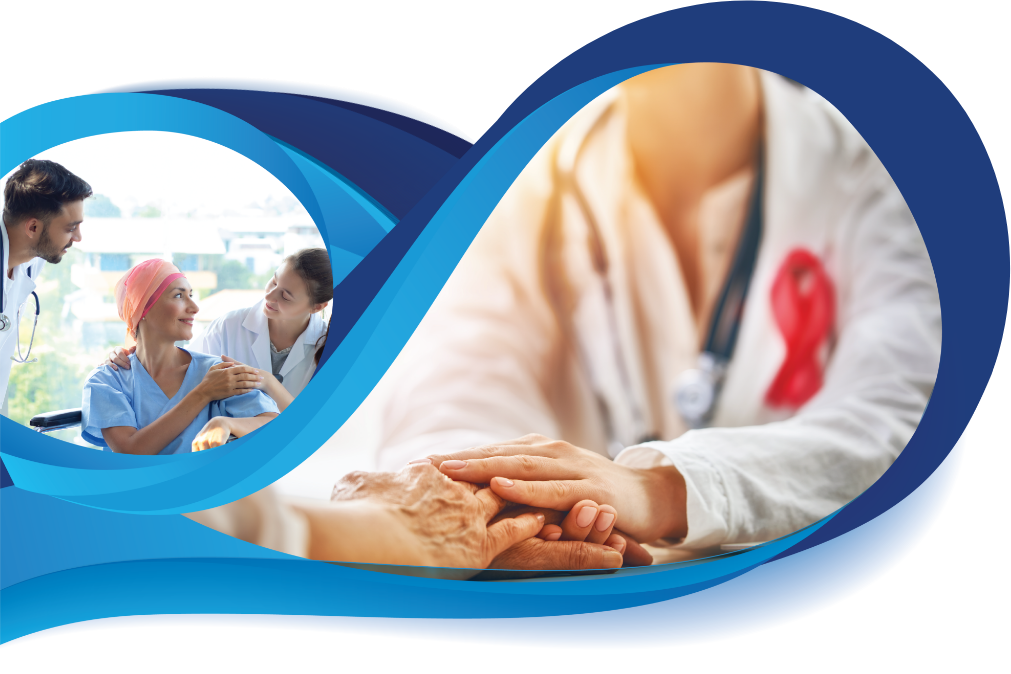 The American Cancer Society estimates that in 2020, there will be more than 1.8 million new cancer cases across the United States. That equates to nearly 5,000 new cases of cancer every day.

On the state level, Florida is projected to have the highest concentration of new cancer cases in 2020, with 700.7 cases per 100,000 people. West Virginia is a close second, followed by Delaware. Utah is expected to have by far the lowest cancer rate in 2020. 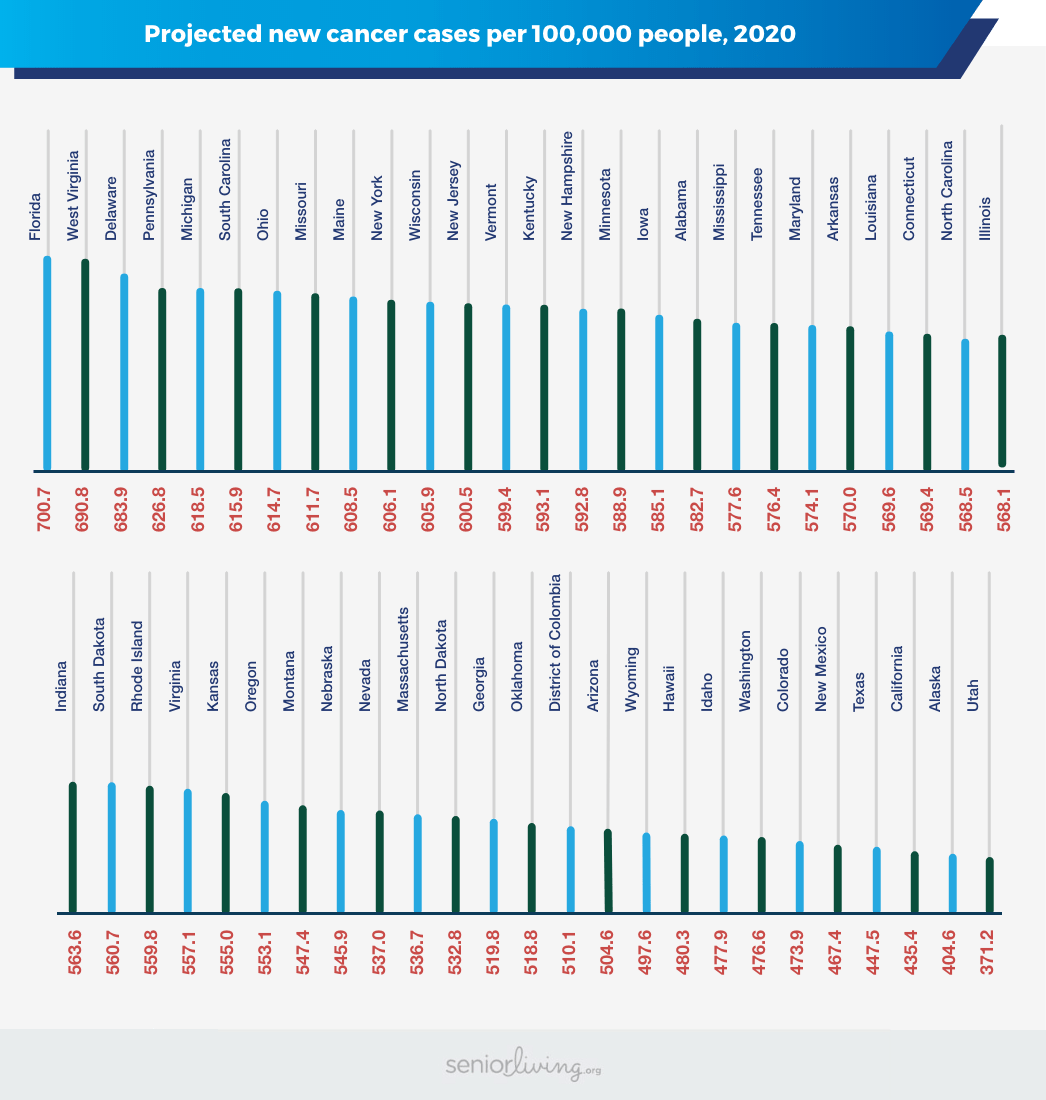 However, prostate, colorectal and melanoma (skin cancer) also have relatively high rates when adjusted for population. 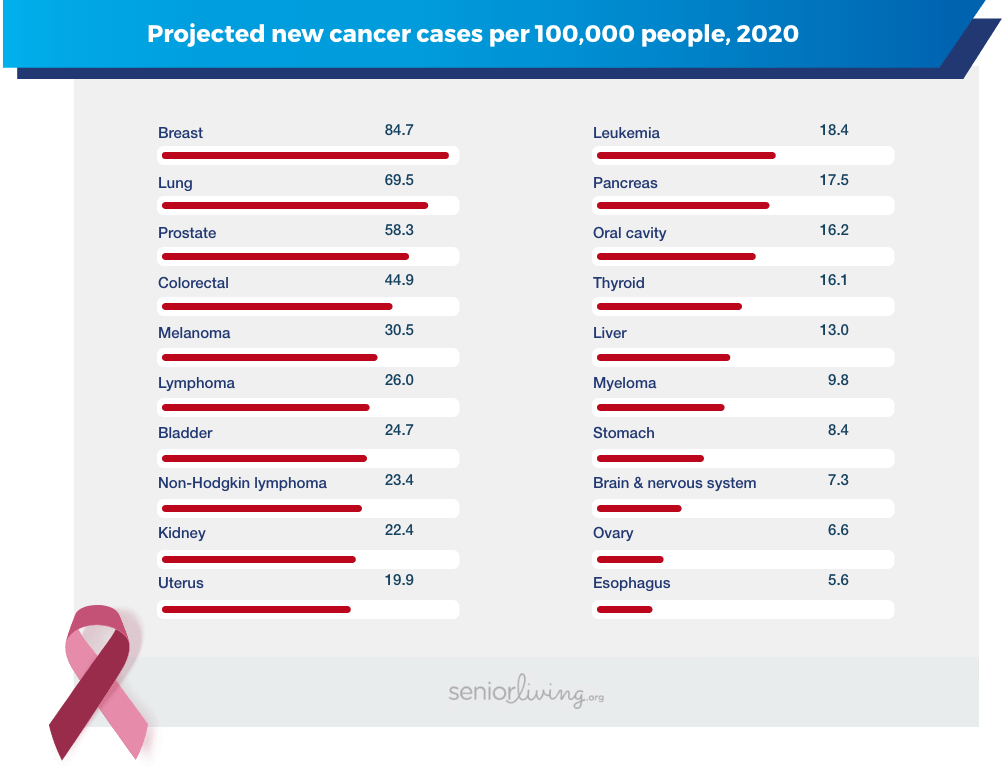 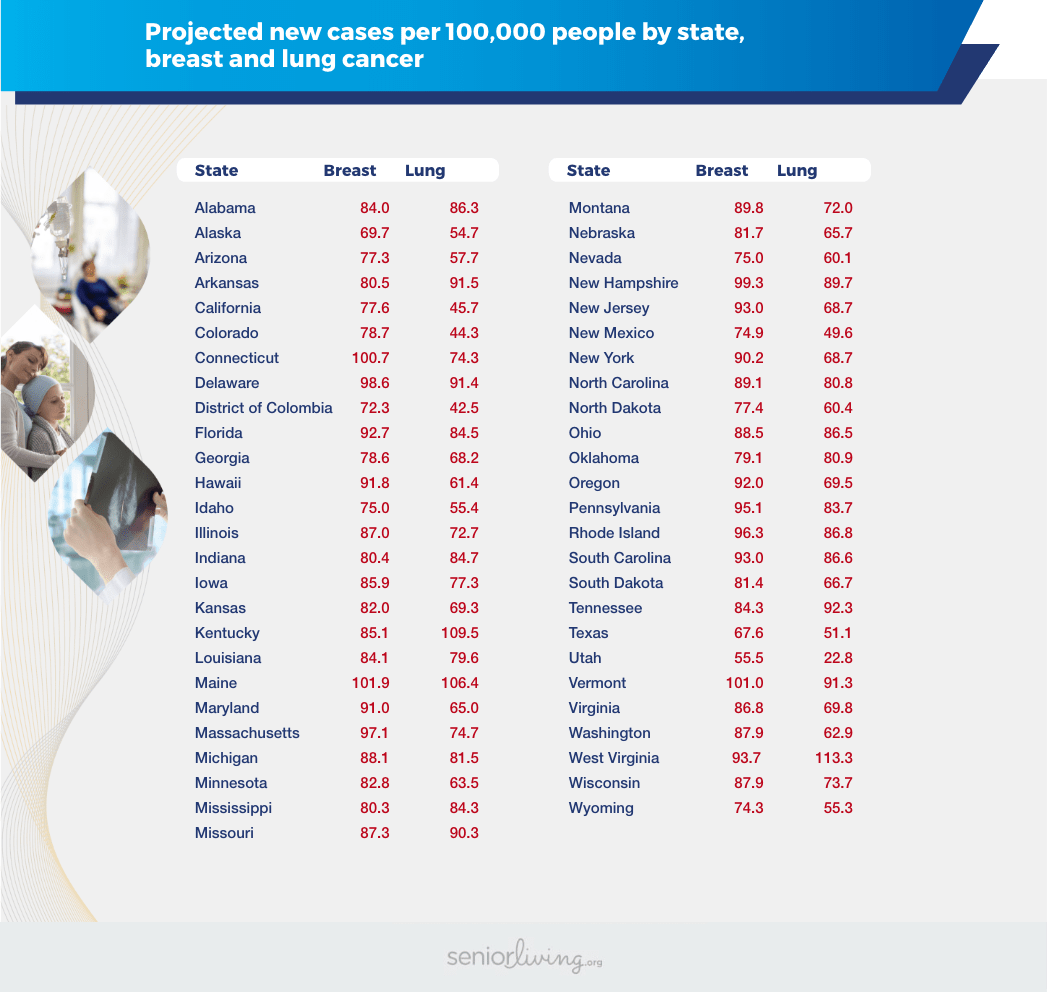 Take a look at where your state stands when it comes to projected new cancer cases per 100,000 people for the 12 most common types of cancer — breast, lung, prostate, colorectal, melanoma, kidney, bladder, non-Hodgkin lymphoma, pancreas, leukemia, liver and thyroid cancer.

Despite the fact that the country recently saw the largest one-year decline in the cancer rate that it’s ever recorded, the American Cancer Society projects that cancer will kill more than 600,000 people this year, meaning there will be more than 1,600 deaths from cancer every day.

Lung cancer remains the biggest killer among the most common types of the disease, with a higher death rate projected in 2020 than any other type of cancer by a wide margin. 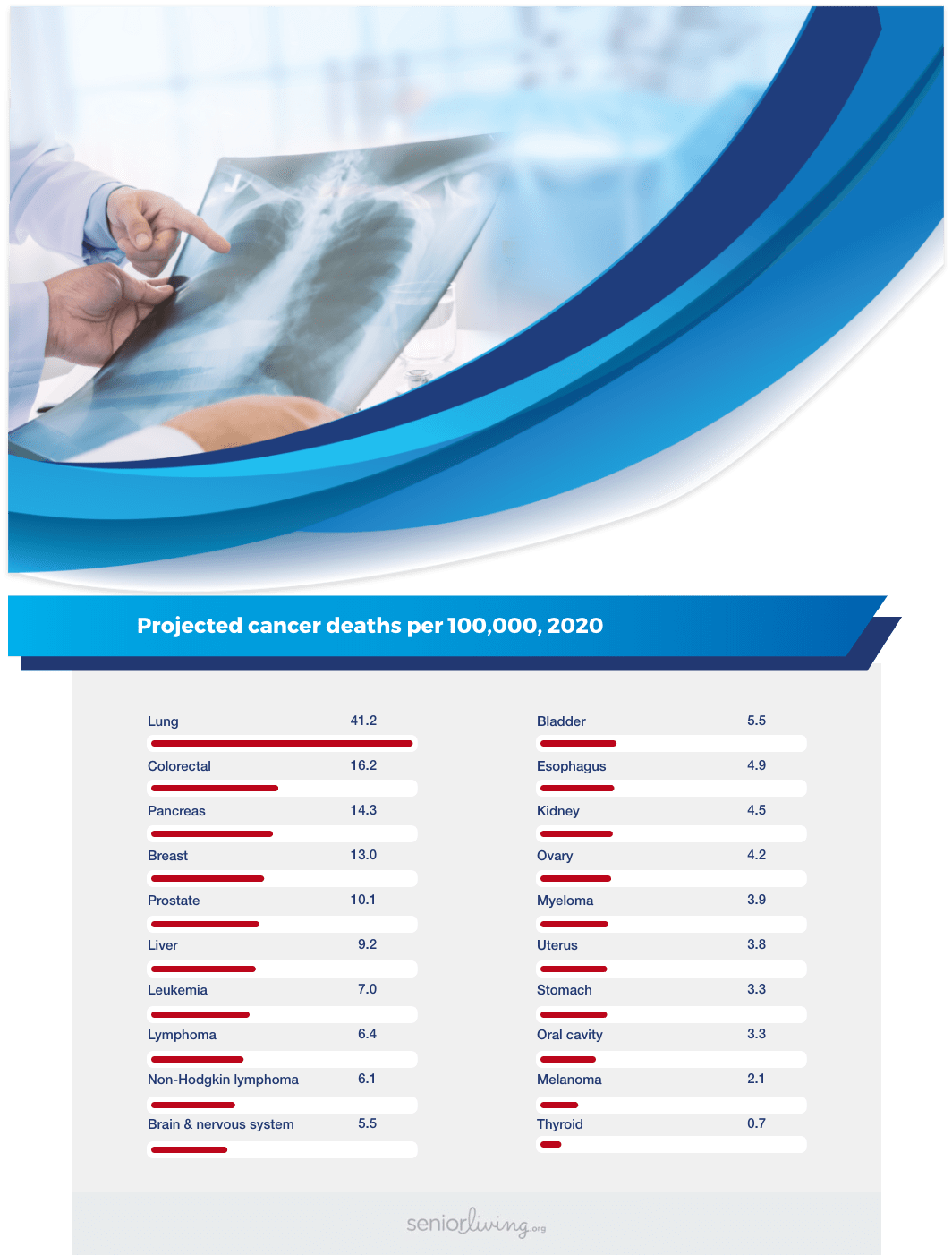 Looking at differences in gender, we can see major variations in the expected rate of cancer deaths between women and men. Still, in every state, men are more likely to die from cancer than women. 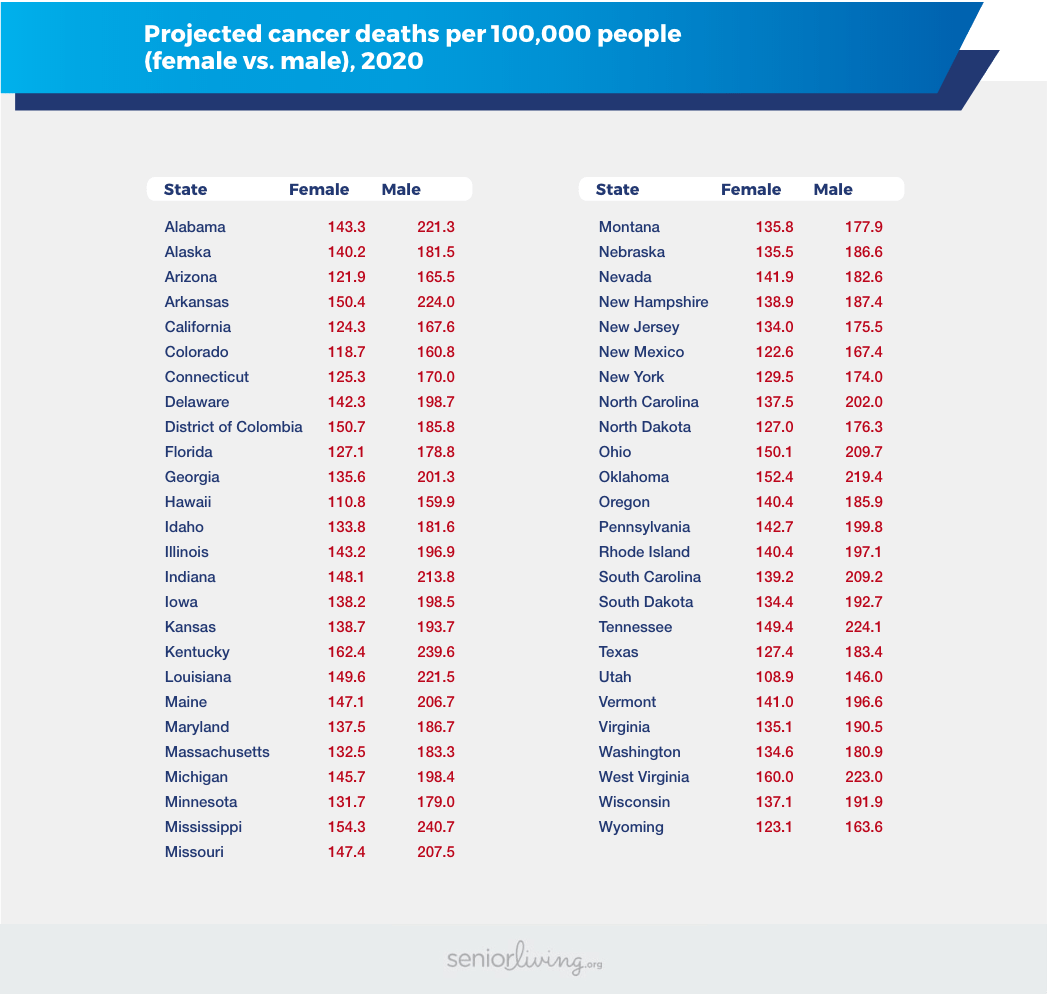 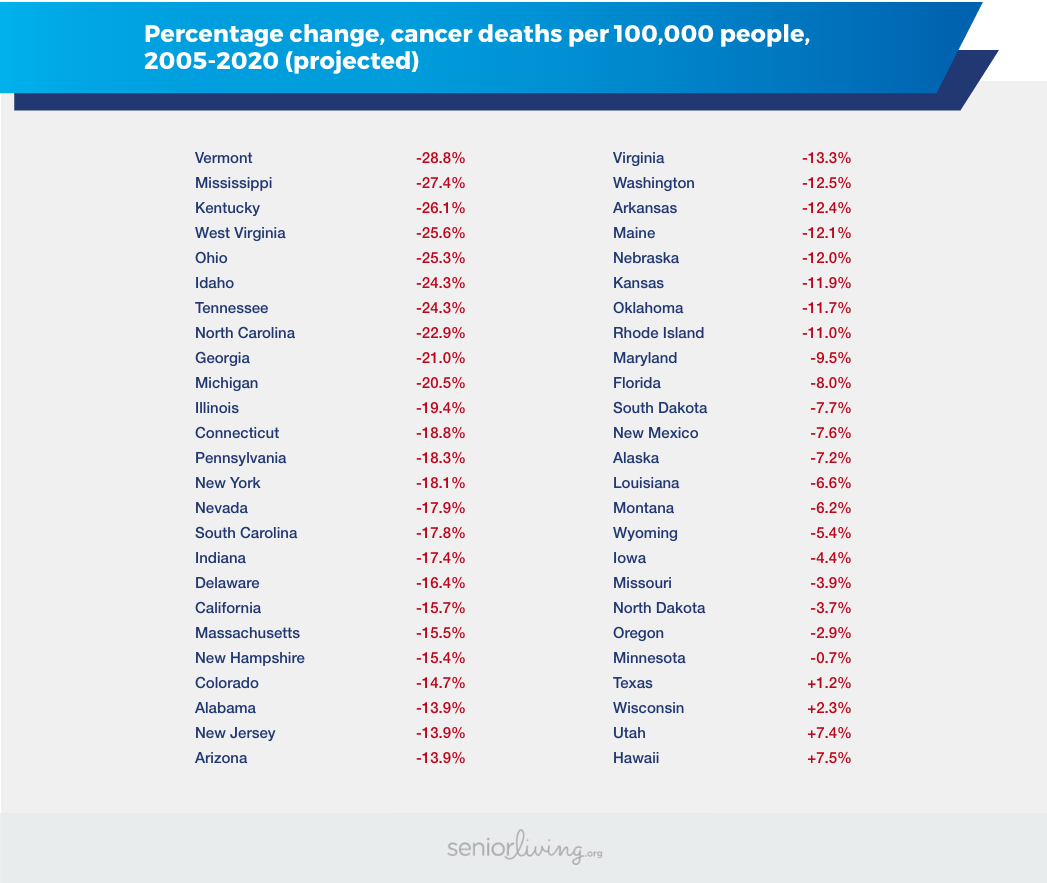 Some cancers have five-year survival rates that near or exceed 90%, while others, sadly, remain much more difficult to beat. 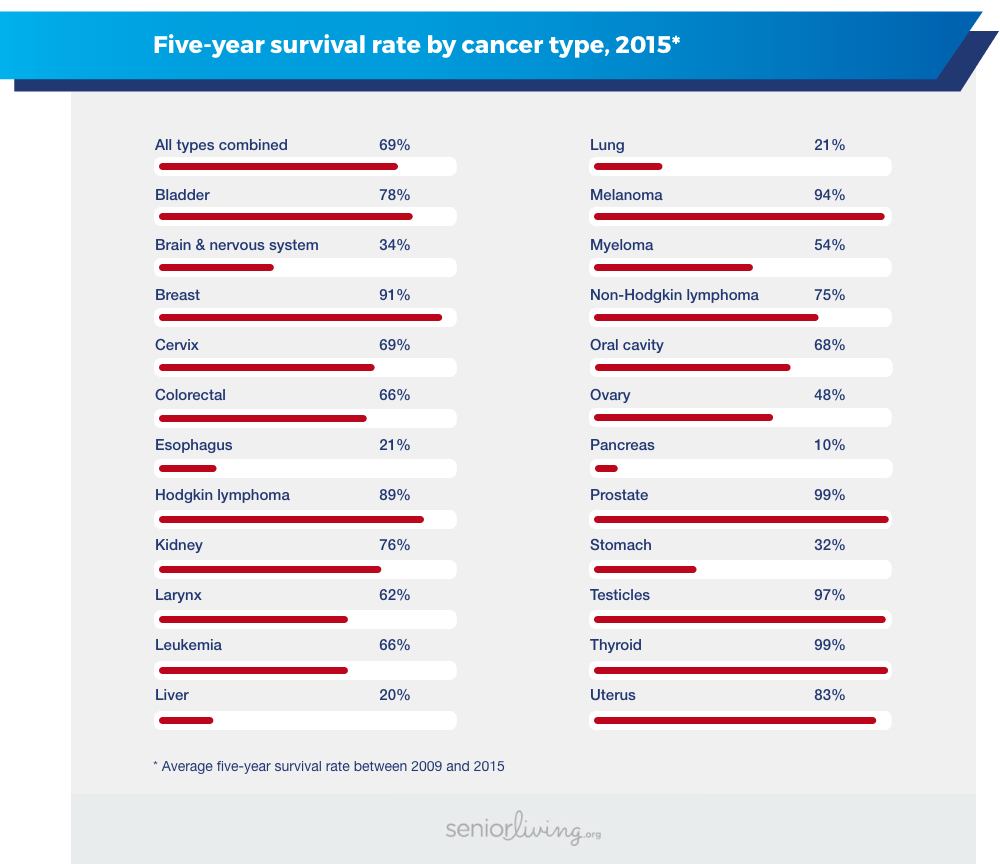 Most forms of cancer have become much more survivable over the past few decades, with some notable exceptions. For instance, the five-year survival rate for liver cancer has climbed by more than 500% since the mid- to late 1970s.

The survival rate for all types of cancer has risen by more than 40%, but cancers of the uterus and larynx have seen five-year survival rates decline. 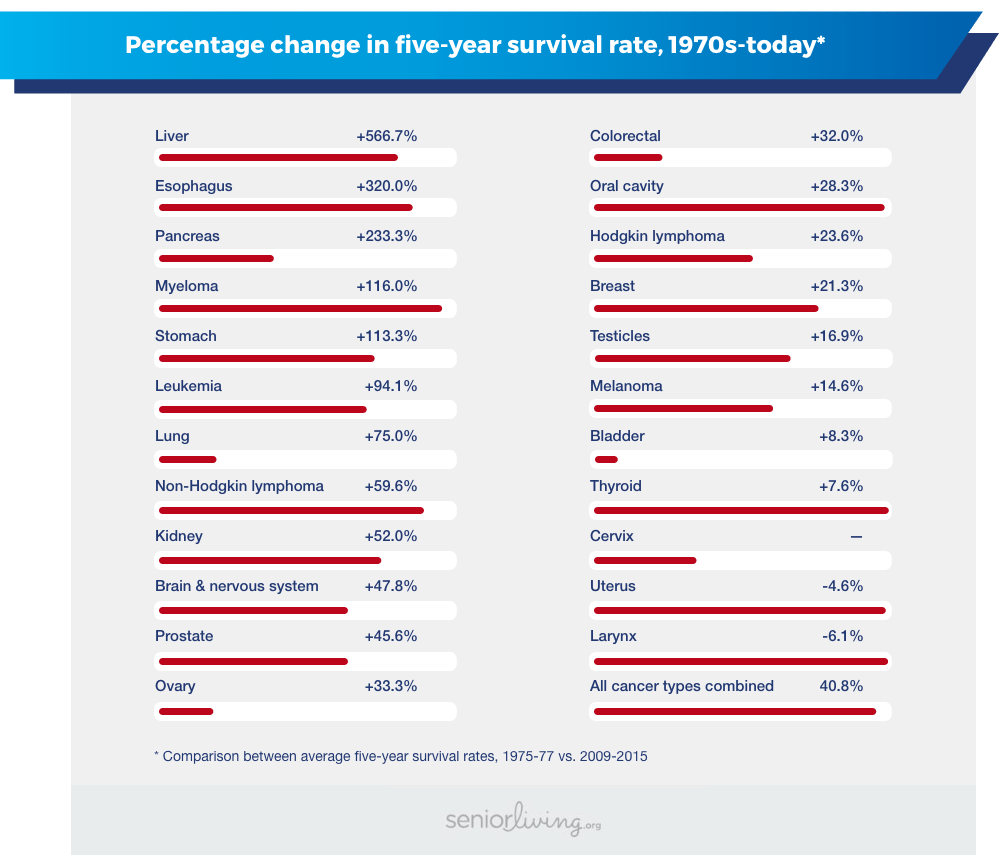 Every person’s body is different, from their genetics to their lifestyle. But with what we know today about how much personal decision-making factors into the lifetime risk of getting cancer, it’s helpful to look at how the states differ when it comes to certain choices.

A huge majority of several types of cancers, including of the cervix, anus and vagina, are caused by HPV, or human papillomavirus, an incredibly common sexually transmitted infection, so common that almost every person who is sexually active will get at least one strain in their lifetime. Only a few strains of HPV lead to cancer, but the advent of a vaccine in recent years means that people can eliminate their risk of contracting the virus.

It’s recommended that most adolescents should get two doses of the vaccine before they turn 15 years old. But the states vary when it comes to the percentage of young people who are up-to-date on the vaccine. 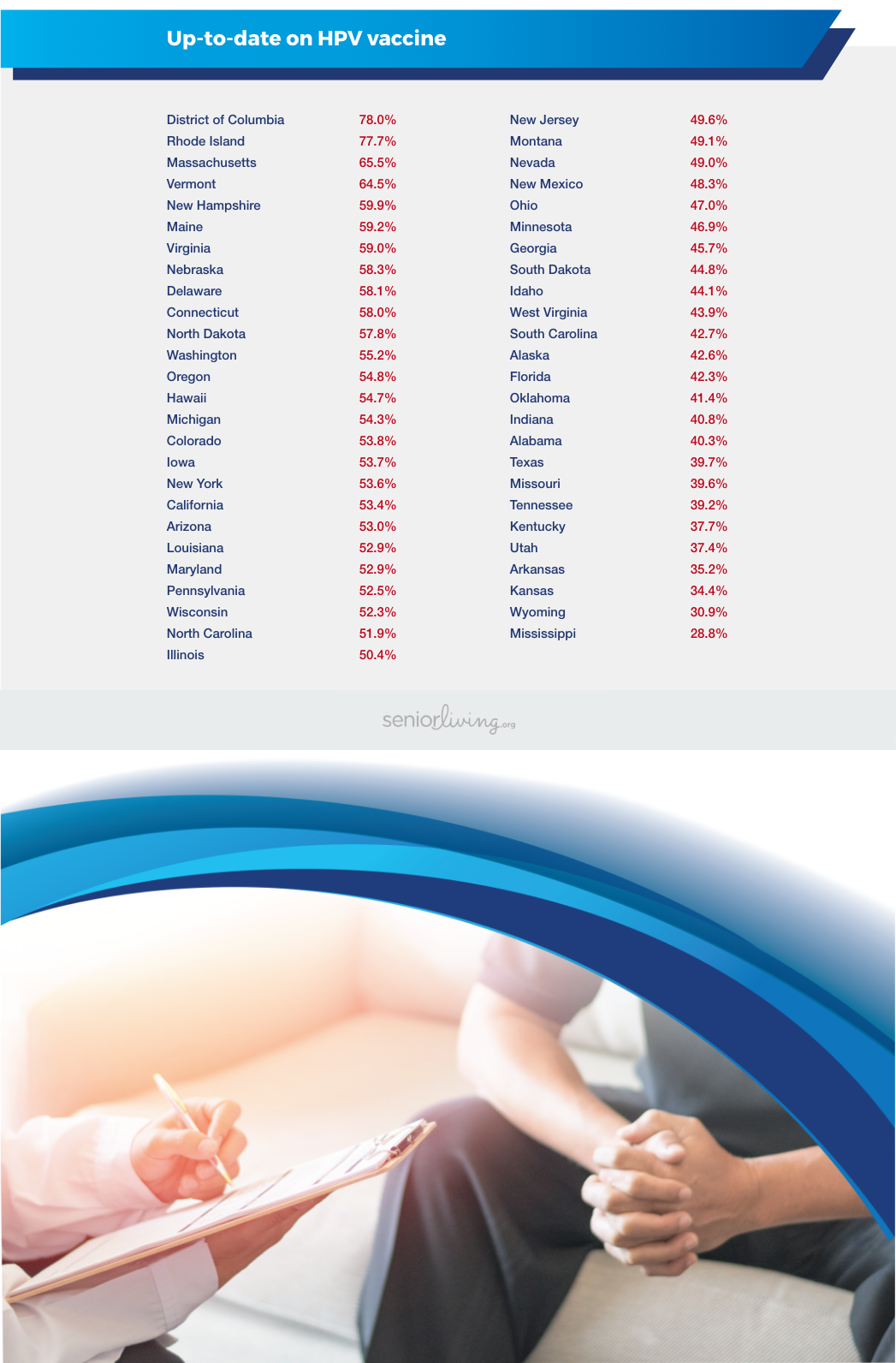 The recent dramatic decline in the nation’s overall cancer death rate is being largely attributed to the fact that smoking cigarettes is falling out of favor in many places across the United States. 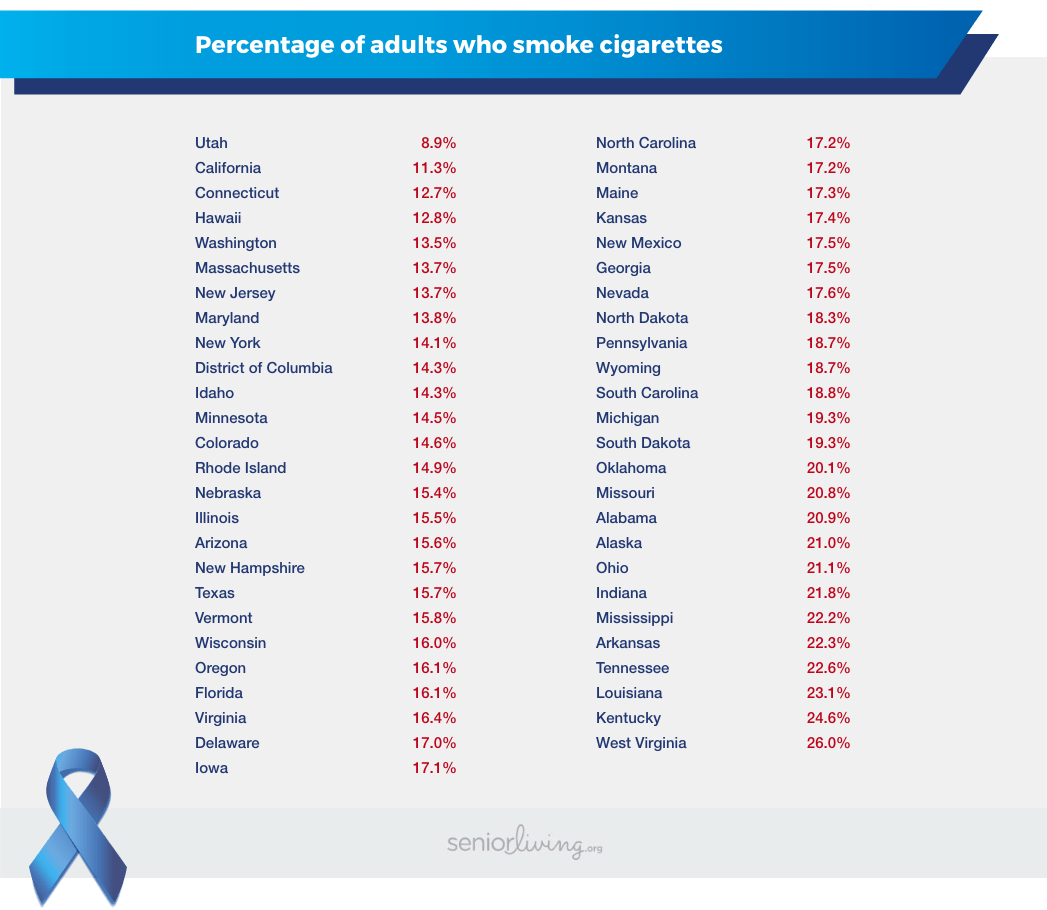 While researchers have not made a direct link between obesity and cancer, statistical analyses have suggested that chronic overweight or obesity are considered risk factors for many types of cancer. For instance, a slight increase in body-mass index (5 points) has been associated with a 12% increase in breast cancer risk.

About 30% of U.S. adults are obese, and nearly 70% are considered overweight, but these figures vary widely from state-to-state. 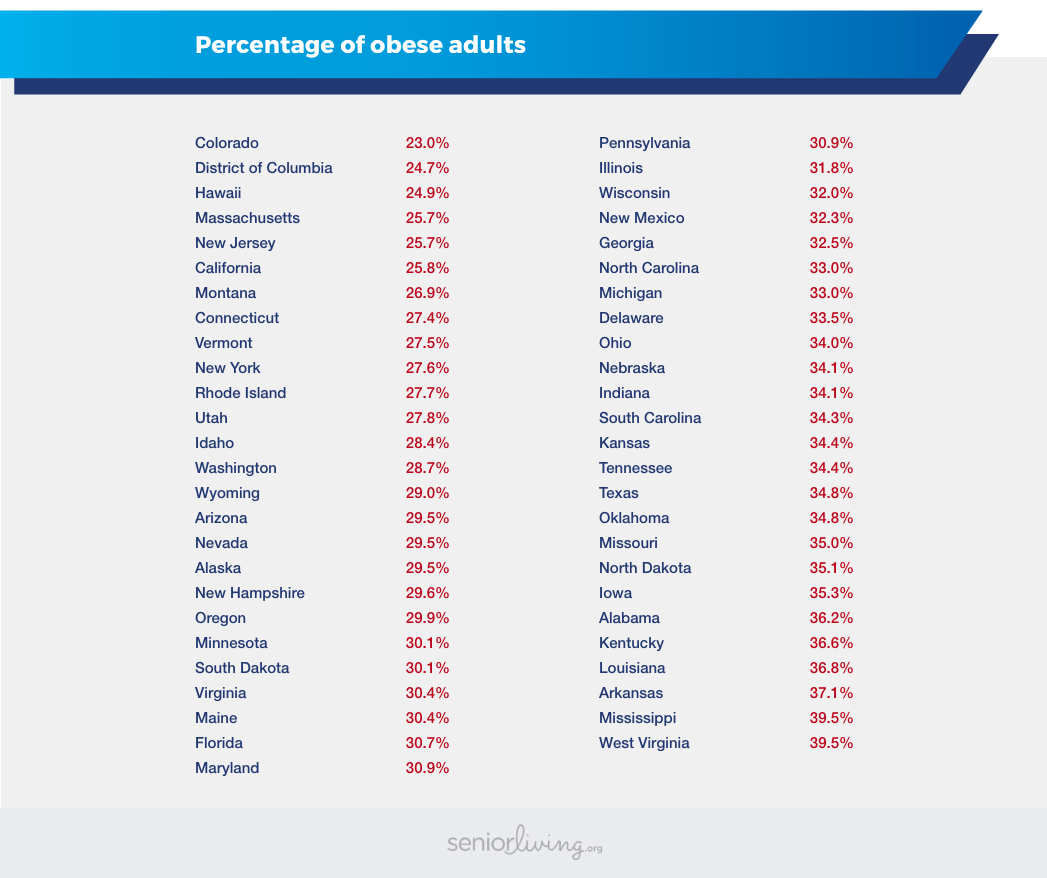 There can be no doubt that a diagnosis of cancer today, while still potentially very scary, does not have the same impact that same diagnosis would have had 100 years ago, or even 20 years ago. Still, the average American has a 1 in 3 chance of getting cancer in their lifetime, and personal decisions can make a huge difference.

As we mentioned at the top, all of our data relating to rates of cancer cases and deaths came from the American Cancer Society’s Cancer Statistics Center. We used the organization’s data analysis tool to inform our analysis.

Data on behavioral risk factors for cancer came from the federal Centers for Disease Control and Prevention, and their sources were linked above, but you can see the original data for HPV vaccination rates here, for smoking rates here and for obesity rates here.

The research, analysis and images on this page are free for anyone to share for any noncommercial purposes. If you do wish to share anything you’ve seen on this page, please be sure to provide a link to the URL for this page.